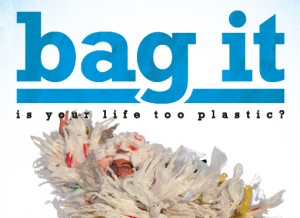 I just finished watching the documentary, Bag It this morning and believe this documentary will have the same sort of profound impact on “single use disposables” that Forks over Knives had on my health and the food I eat. I have not been dedicated to finding solutions for the sustainability of the planet. Like many I walk into a store, rip off a plastic bag, place my product in it. At the check out counter that plastic bag is placed in another plastic bags. Eventually these bags start to collect in the home. What do you do with them? Bag It answers that and many other questions raised regarding the politics surrounding plastic, single use disposable, waste and recycling, ocean health and marine life and most importantly, human health.

My journey didn’t start looking to “go green” or decrease my “carbon footprint” on society. When I decided to change my life, I looked at what I ate and learned what I shouldn’t eat, foods that promoted disease, sickness and even cancer were something I did not want on my menu. In 9 months my view on food and a plant-based, whole foods lifestyle has had a major impact on my life.

While reading comments and posts from other like-minded individuals, I stumbled upon one titled, Bag It – Is Your Life Too Plastic? (thanks Rick). Strangely enough even this post had a genesis elsewhere, in a thread discussing BPA in canned foods. Bisphenol A (BPA) “is a chemical that has been used for more than 40 years in the manufacture of many hard plastic food containers such as baby bottles and reusable cups and the lining of metal food and beverage cans, including canned liquid infant formula” (source). This chemical is linked with serious health problems (source):

All these health concerns from plastic, why shouldn’t I consider alternatives? It became obvious that the plastics industry and the American Chemical Council were not going to answer obvious health concern questions. Plastic has to be proven to be harmful to health, but those words were never echoed in this documentary.

The numbers are staggering when it comes to the most common use for plastic. The plastic bag or “single use disposable” as it has become known. What was more surprising were the percentages of plastics being recycled, but oddly enough many plastics are not recyclable. The U.S. exports these bags to Asia, where they sort through and burn down those plastics that can be reused. Sounds healthy, huh?

As important as human health is the effect of these plastics on the environment. I never new we had garbage patches in the major oceans of the world. The most studied has been the North Pacific Gyre or Great Pacific Garbage Patch. “Most debris consists of small plastic particles suspended at or just below the surface, making it impossible to detect by aircraft or satellite. Instead, the size of the patch is determined by sampling. Estimates of size range from 700,000 square kilometres (270,000 sq mi) to more than 15,000,000 square kilometres (5,800,000 sq mi) (0.41% to 8.1% of the size of the Pacific Ocean), or, in some media reports, up to “twice the size of the continental United States” (source).

The impact these garbage has on marine life is shocking. Sea life and bird consume these pieces of plastic thinking it’s food, only to feed their young. When some of these creatures are dissected there is a considerable amount of plastic found. The Black-footed Albatross was one of the birds this film discussed on Midway Atoll.

There was some comfort in knowing that some Pthalates have been banned and larger retailers pulled this items from the shelves. Many were infant related items found in Wal-Mart, Toys ‘R’ Us and Target. “Phthalates are a group of chemicals used to make plastics more flexible and harder to break. They are often called plasticizers. Some phthalates are used as solvents (dissolving agents) for other materials. They are used in hundreds of products, such as vinyl flooring, adhesives, detergents, lubricating oils, automotive plastics, plastic clothes (raincoats), and personal-care products (soaps, shampoos, hair sprays, and nail polishes)” (source).

So what started out as one man’s quest, turned into a very eye opening journey. How can one plastic bag have such an impact? It does and many of us don’t think about the repercussions of these bags on a large scale. Bag It has me rethinking how I shop, opting for cloth bags and not using the plastic bags provided. This can be looked at as another starting point in my life. It comes as no surprise that this documentary lead to further discussion on “downsizing” and “decluttering.” At first glance this zero waste house could seem extreme, but if you really start to think about it, is it really?