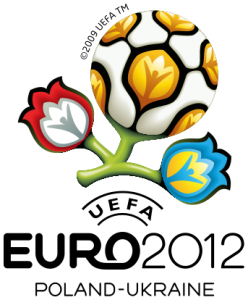 This year footballers and their fans get to experience UEFA European Championship 2012 co-hosted by Poland and the Ukraine. Matches begin June 8, with the final being played on July 1. This championship is played every 4 years, the years in which the World Cup is not played. Next to that event, this is the championship that gives some indication as to potential winners or contenders in the upcoming World Cup, the next one to be played in Brazil in 2014.

This season Spain comes in as heavy favorites, winning this championship in 2008 defeating Germany, 1-0. Two years later Spain defeated Netherlands, 1-0 to record their first World Cup win. This vaulted Spain to the top spot in the FIFA/Coke Cola World Ranking. This year for the European Championship, Spain enters as the top ranked team and the favorite, in my opinion to hoist the Henri Delaunay Trophy in Kiev, Ukraine on July 1.

One player Spain won’t have will be David Villa, who suffered a broken tibia in a Club World Cup match in Yokohama against Al Sadd. His skills and experience (82 caps, 51 goals) will be missed in this competition, but I feel it opens the door for Fernando Torres (92 caps, 28 goals), while not in form much of the year for Chelsea could bring his name back into prominence. Even with this injury, Spain still will be the beast to contend with. They should have very few problems winning Group C (Italy, Ireland, Croatia) to face the runner-up from Group D (Ukraine, Sweden, France, England) in the quarterfinals, which in my opinion will be England, as France wins the group.

Of the 16 teams involved in the championship, I feel there are only 5 teams with a legitimate chance to win in Poland/Ukraine. I have already cited Spain, who I feel are the odds on favorite. The other 4 teams; Netherlands, Germany and Portugal. My dark horse team, France. Sorry England. Sorry Italy. I don’t feel either of these teams are complete, especially Italy who’s off the field problems and lack of talent could be evident in his competition. As for England, the Premiership is one of the best leagues in the world (right there with La Liga), but many players involved are not English, coming to England to play. Outside of Wayne Rooney up front, his 3 goals on the international stage since 2010 is a big concern. Thankfully Joe Hart has really come on the last season or two and will be the starting keeper, which is a big improvement over what we saw in the 2012 World Cup. By way of comparison with teams like Spain and Germany, the midfield and defense of England is just average.

Netherlands seems to be solid all around on the pitch. With Edwin Van de Saar retiring from football, Maarten Stekelenburg (46 caps) will be asked to fill some big shoes between the pipes as he leads the Dutch in this competition. Up front The Flying Dutchmen are strong led by Robin Van Persie (64 caps, 26 goals), Klaas-Jan Huntelaar (52 caps, 31 goals) and Dirk Kuyt (87 caps, 24 goals). Van Persie comes off his best season for Arsenal scoring 30 goals and in very good form. The midfield is strong and controlling with the elder statesman, Mark van Bommel, Wesley Sneijder, Arjen Robben and Rafael van der Vaart. The defense would be considered their weak point, but they are anchored by John Heitinga and Joris Mathijsen. Netherlands will battle Portugal and Germany for top honors in Group B, which is my “Group of Death” with one of those three teams going home.

“Zee Germans!” They are coming and fielding one of the most experienced group of footballers in this competition. Much like the Italy World Cup team in 2006, this German squad is composed mainly of players who play in Germany. There are a few exception, such as Sami Khedira (Real Madrid), Mesut Özil Real Madrid), Per Mertesacker (Arsenal) and Miroslav Klose (Lazio). Watching Manuel Neuer play in the final few games of the Champions League, proved me they have a world class stopper. Germany does have experience on defense with Philipp Lahm (86 caps), Per Mertesacker (81 caps), in the midfield with Bastian Schweinsteiger (90 caps), Lukas Podolski (97 caps) and up front with Miroslav Klose (116 caps).

Currently Germany is ranked #2 in the FIFA/Coke Cola World Rankings, but much like Netherlands are in Group B and don’t have easy matches against the Dutch and Portugal. Germany were runners-up back in 2008 when they were defeated by Spain, 1-0. While I still like the Dutch, Germany has the work ethic and experience to win this group and much weaker opponent in the quarterfinals. It would not surprise me a bit to see Germany back in the finals. In order to do that, they may have to face Spain in the semi-finals if both nations win their respective groups.

Portugal is currently ranked #5 in the world rankings. When one thinks of Portugal, Cristiano Ronaldo is the image conjured up. He is the captain of the squad and the most experienced (89 caps, 32 goals). As I have already mentioned they are in a difficult position having to play Germany and the Netherlands in Group C and if I had to pick a team not to make it out of qualifying, it would be Portugal.

Their friendly matches up to this point haven’t been all that impressive, playing some very weak teams, such as Bosnia and Herzegovina, Cyprus, Finland and Luxembourg. In many of their victories though, they did put up 4 or more goals (last 6 matches). We will have to see if they are able to play with the challenging competition in their group. They open the European Championship with Germany.

My dark horse this year’s European Cup is France. Many who know me probably thought I would say Italy, but with their national team being “in transition” with a mix of experience and lots of youth, they will struggle. France, while not overly experienced have been played good football internationally, losing only (to Germany) dating back to August, 2011. They drew England in their first match, which will be the toughest nation to face in their group.

This nation has much to prove after the failing to get out of the group stage in South Africa during the 2010 World Cup, going 0-1-2. I never was a big fan of their former manager, Raymond Domenech who was at the head of the controversy after “Nicolas Anelka’s expulsion from the squad, prompted by a profanity-laced tirade against coach Raymond Domenech” (source). It was an ugly situation for the FFF. Hopefully under Laurent Blanc, Les Bleus can return to the international stage with a good showing.

As it stands, the other 11 teams just filling out the groups. I don’t doubt these national squads are composed of the best each nation has to offer, but they are all under Spain. Regardless of who wins, this will be a great start to the summer with only a short break before the new seasons kick off in August. If it’s not evident I will pick Spain to retain their championship with the Netherlands as the runners-up.