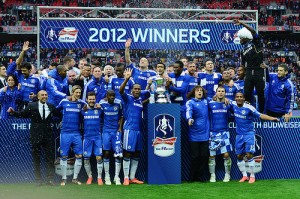 Another amazing football final last night in Munich as Bayern Munich hosted Chelsea in the Champions League Final. Much like that last few games I have watch, including the nPower Championship Final yesterday, the last day of the Barclay’s Premiership and the semifinal match featuring Real Madrid and Chelsea, this has been one of the best finishes I can recall.

I wrote about the Manchester City thriller in stoppage time to steal the Premiership trophy away from Manchester United. Yesterday was another thrilling finale as West Ham United defeated Blackpool to gain entry into the Premiership next season in a late goal thriller from Ricardo Vaz Te. This game seemed to set the stage for the main attraction, Bayern Munich, hosting Chelsea in their home country, on their home pitch.

While it started a bit slow and didn’t seem like it had the pizazz the semifinals had when Chelsea played Real Madrid, the game alive in the second half. The football Gods must have been wearing blue, because Chelsea got break after break, not only for the 90 minutes of the match, but into extra time and then the shoot out.

It was Bayern’s night, yet they seemed to have forgotten their shooting boots last night as very little went on target.  After Thomas Müller put Bayern up 1-0 in the 83rd minute, it seemed the game was over, yet there was more magic to come for a team who’s destiny was written during this Champions League.

Chelsea struck back in the 88th minute when Mata corner kick found the head of Didier Drogba. The power and finesse of the header beat Neuer and we were tied. For much of the game, it was Bayern on attack and  Chelsea defending. Yet Chelsea was able to capitalize when it was needed.

Drogba, nearly turned goat when he committed a foul in the penalty box and Arjen Robben stepped up to take it. Even the sure footed Arjen Robben failed from the penalty spot as Petr Cech dove to his left to make a sure stop on Robber. The rest of the extra time periods went scoreless, it was off to the penalty shoot out.

Not sure where I stand on penalty shoot outs, as it’s a crappy way to lose a game, but there is much thrill and excitement in a 1v1 situation from 12 yards out. While Chelsea started off with a save from Neuer, it came down to the final kick for Chelsea and the boot of Drogba again. He sent Neuer the opposite was as he tucked the ball in the lower left corner of the net and sent Chelsea on to victory.

Much like the end of the Premier League, the last few rounds for Chelsea fans were heart stopping and thrilling to view, even as a non-Chelsea fan. They now take their place atop all others as Champions League Champions and the best in Europe. Some debate still will arise as to Chelsea being the best. Madrid is a very solid team, I was highly impressed with Bayern last night. Unfortunately much of the make up of Chelsea don’t hail from England, so while it’s a great club victory for the Blues, I fear England will have a tough time in the upcoming Euro 2012. As for the $1 billion spent on this Chelsea team, time will tell who stays and who goes.