I had what was hopefully the final appointment with the orthopedic surgeon on Monday and he released me to start being more active with the knee. the stitches were removed and sutures were glued on to the three incisions 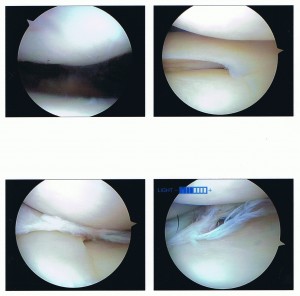 on my knee. I was also provided a comparison of what a healthy meniscus looks like and what mind looked like when he got in there with his light and camera. In the image, the healthy meniscus are the top two images. The lower two images are how mine looked.

My meniscus was torn on the medial (inner) part of my knee and bent back 180 degrees causing the pain, which in turn caused the pain and swelling I had been experiencing for 2 months. He trimmed out of the torn piece of meniscus, while preserving a majority of the meniscus on the front and anterior of my knee.

I only worked out once last week after my surgery, doing 30 minutes on an elliptical machine. Last night was the second time I worked out and noticed a firm bump on the front of my knee. Thankfully it coincidences with one of the incisions, so hopefully it’s just a matter of time before than swelling (if that is what it is) decreases and the pain subsides.

I still have pain on the inside of my knee, more where the ligament is located at. I am sure we would have seen something on the MRI, but that pain has not gone away. I will give it 4-6 weeks and if the pain still exists might request my MRI and send it to another doctor for a second opinion. Thankfully I have very little pain now walking up stairs or during my daily routine.