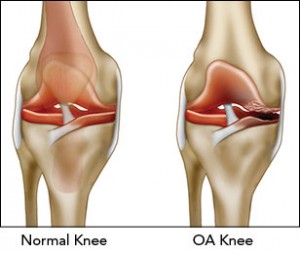 I have a nagging feeling. It’s been with me since I injured my knee some 3 weeks ago. Initially the nurse practitioner diagnosed it as a sprained MCL. A week later, she changed her diagnosis to a torn meniscus. After her mistake of not requesting an X-ray for my orthopedic surgeon, my appointment was changed for today.

I saw this surgeon for my ACL in my right knee 3 years ago to the month. This time around it was the left knee. He showed me the X-rays and what we were looking at. In HIS opinion there was nothing wrong with the meniscus or the MCL or any of the ligaments in the knee. Instead he showed me a view of my knee in the bent position and he said that my knee is bone on bone and I have osteoarthritis in my left (and most likely right) knee.

He didn’t bother pushing and prodding the knee today, which I found a bit strange. In fact I felt like he was trying to push me out of the office. Somewhat uncomfortable if you ask me. I had never had this feeling with him previously. So his answer, BIG PHARMA! Yep that’s right sell me a series of injections (Supartz) to replace the lubricating substance (hyaluronan) that cushions my knee.

He also suggested physical therapy, which I was already given by the nurse practitioner, as well as a series of exercises to strengthen the muscles around the knee (quad and calf). Therapy starts next week and I have specific instructions to pass along to the therapist from the orthopedic surgeon.

Even hearing a reason for my pain, I am having a difficult accepting this fact. Maybe I would have felt better knowing something was torn, even though that is a “worst case scenario.” It might be my insurance company won’t even cover the injections, which would not surprise me. Until then I will go along with the PT and see if the exercises I am given strengthen the surrounding muscles and possibly reduce the pain.