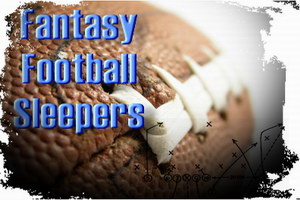 Wow, another week and yet more injuries. What is an owner to do? The wire continues to thin out in each passing week, but amazingly there is still talent making headlines each week. While this talent could be a “one week wonder” it won’t be surprising when some owner drops a bigger named player to pick this young, hot stud up.

This weekend we saw Mike Vick, Kenny Britt and Darren McFadden all injured to varying degrees. Unfortunately the most severe was that of Kenny Britt with a tear to the MCL and possibly ACL, which will end his season. Reports are Mike Vick could miss 3-4 weeks with a broken right hand and DMC claims he has no injury, but the groin had tightened up. We also add another member to the “Hammy Hoax” list that of Jeremy Maclin, don’t expect him to face the 49ers next weekend.

Thankfully waiver wires across fantasy leagues are open for business and ready for action, this was another big, but strange weekend in fantasy football. Why is it this year? Oh yeah it was the how negotiations the owners and players participated in that saw abbreviated training camps and a quick free agency period. I believe we are still feeling the fall out and from the looks of it, we could still feel it for a longer period.

Kendall Hunter, RB SFO
Sure the 49ers are 2-1 but Gore has not gotten off to a very impressive start this season. After 3 weeks he has only totaled 184 yards from scrimmage and 1 TD. Sunday tweaked an ankle, but played hurt until the final few series in which Hunter took over the duties. While not all that memorable 9-26-1 TD, Hunter is definitely becoming a stronger insurance policy for Gore now that the first injury has occurred. Gore owners should already have Hunter stashed, but he could be available in some leagues.

Bernard Scott, RB CIN
Cedric Benson will have a hearing on Tuesday and faces a 3-game suspension. This could open the door for Scott on a temporary basis.       While he has had no fantasy value to this point, Scott could face BUF, JAC and IND while Benson is suspended. If you are in dire help for a few weeks, you might add Scott to your team.

Daniel Thomas, RB MIA
Surprisingly Thomas makes the watch list for the first time (not sure why he wasn’t here last week) after a 23-95 yard, 3-27 yard 1 TD through the air performance in a losing cause. The important fact is he is now gets the bulk of the carries on the ground. Bush will still the “change of pace” back, but won’t be the feature back, I believe Thomas has already won the full time job. Thomas has 2 tough games coming up, but versus SDG and NYJ, but he is on his way to establishing himself as one of the top rushing rookie RBs.

Alfonso Smith, RB ARI
Chris Wells was a last minute scratch and did not play against a soft SEA defense. Smith put up a 17-54 yard performance. Not all too impressive, but he showed much more than what veteran Chester Taylor did. Wells had played well for 2 games, but now carrying an injury Smith might take some carries down the road with Stephens-Howling a bit dinged up as well. This might be a situation to watch if Wells begins to struggle.

DeMarco Murray/Tashard Choice, DAL
I have added these backs based on reports that Felix Jones aggravated  his separated shoulder near the end of the MNF game. With a bye in week 5 the possibility is there to give Jones a few weeks off to heal. We will have to wait see what transpires out of Dallas camp and Jimmy Jones mouth.

Victor Cruz, WR NYG
I will consider Cruz a “one week wonder” at this point after turning a 3-110-2 TD performance vs Philly, including a 74 yard TD. He did make the most of his opportunity because of Manningham being out due to a concussion. The way injuries are occurring this season it’s quite possible Cruz could see more playing time, especially with Hixon being lost to the ACL. Keep an eye on Cruz, I believe there might be other better WR to pick up at this point.

Torrey Smith, WR BAL
Who? Smith is another “one week wonder” in my opinion at this point. WR, Lee Evans was inactive for Week 3 vs STL, which gave Smith the start, one in which he capitalized on the soft Rams secondary as his first NFL catch went for a 74 yard TD. Smith would finish the 1st quarter with 3 TDs and the day with 5-152 yards, an amazing day, but leave in the 4th quarter with cramps in his hammy. No doubt he will be targeted on the waiver wire. “Buyer beware” though he might have some value with Evans status in question for Week 4.

Nate Washington, WR TEN
Washington shouldn’t be listed, but I will include him now that Britt is done for the year with a torn MCL/ACL in his knee. Washington will take over as the #1 and with the success Britt saw, Washington has some big shoes to fill. As long as Hasselbeck can stay upright, Washington should benefit. It might also be worthwhile to watch who steps up at the #2 WR spot, it should be Damian Wiliams. Jared Cook will also be asked to fill the void.

Donald Jones, WR BUF
(Thanks to Cody and Buffalo Blizzard for this player.) Jones led the Bills in receiving vs NEP with 5-101 (10 targets). His number have been improving each week and the way Fitzpatrick continues to show a steady increasing in the passing game Jones may continue to see a nice bump in his stats. In defense of his performance, the Bills were down 21-0 and Fitzpatrick had to throw so all WR benefitted from this.