It’s been a few years since I actually updated the shack. While I wish I had a “dedicated” shack, like the 10×14 shed in the backyard I was just not able to swing it, so I did the next best thing. I relocated the shack from an upstairs, spare bedroom to the garage. I built a raised platform on which to stash cables and wires that run to the outside through the garage wall that  comes out in the backyard. 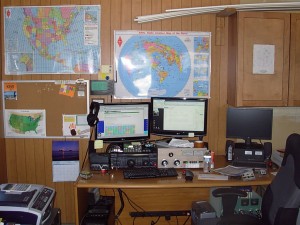 I had a 5′ wide desk with a few shelves I picked up from Ikea and I called that my shack. Thanks to a buddy at work who provided me with a 6′ long desk I now have a bit more desk space and can spread out now. Unfortunately I am in need to some sort of shelf to  put my monitors on, as currently they are on top of my radio and amplifier. Overall though I am pleased with how it all turned out.

I have much more wall space now, which is what I was missing previously. Like most shacks I can now display my world map, as well as a US map, some cork boards and my “wallpaper” that currently includes my initial WAS (54,367) and WAS Digital (RTTY #865) along with my VE certificate and ‘Life Member’ plaque from the ARRL. It looks and feels more like a shack now. Wonder if that will actually help my total scores? More mults, maybe? Doubtful, but one ham can dream.

In other ham related news I attended the August NCCC Meeting held in Livermore, CA this past Monday and sat with some great hams, Scott, W6CT, Tom, N6ST and our current President, Chris, N6WM. It was a light turnout, but that did not take away from the meeting one bit. The CW Open was discussed, which is less than 2 weeks away. Visit CWops.org for all the details. Unfortunately as a fantasy football commissioner of a league I have run for 28 years, I will be on the road in Las Vegas for our draft.

The other topic was that of post contest log analyzers. I had only recently found SH5 by using TR4W during the CWOps mini-contests. There are a few that seem to parse a .LOG file very well breaking down a specific contest and giving you detailed reports and statistics that could provide useful in improving in the same contest next year. You can find the files on the NCCC website listed under ‘Resources.’

I also spoke with Rusty, W6OAT, who was getting together with John, W6JZH who is a close ham with a wonderful station that is currently being upgraded. It is my hope to operate from his fine station soon. As I understand it, CQP and ARRL Sweepstakes are already out the window as the station will be in use. Rusty was going to look at helping me find a seat at another station in order to operate. More on that later…