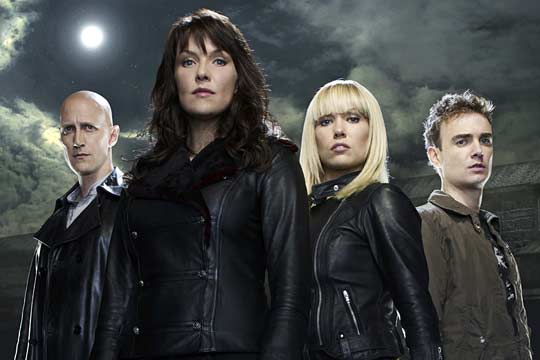 Being a science fiction fan I was enthralled with what Stargate, the movie brought to the big screen in 1994. Three year later, Stargate SG-1 was born, which centered around the “flagship team” of the Stargate program, SG-1. Featured on this team was Amanda Tapping, who played Samantha “Sam” Carter for the shows 10 year run. She also reunited with the Stargate franchise in Stargate: Atlantis, as well as a few appearance on SGU Stargate Universe. Her recent role has her portraying new character as she works to protect “the network” and those within.

I was in luck when a suggested title through Netflix was the TV series, Sanctuary featuring Amanda Tapping as the enigmatic (and sexy) Dr. Helen Magnus. The show follows the”exploits of Dr. Helen Magnus and her quest to protect various cryptids, legends, and normal animals/people with certain extraordinary powers and abilities – what most people would consider monsters. “The Sanctuary” serves as a safe haven for these “Abnormals”.

The exotic and shadowy past of Dr. Magnus is not revealed up front, but you learn about her background and how she became to be over the first season. Over her years she had surrounded herself with some great minds, such as Nikola Tesla as well as John Druitt, otherwise known as Jack the Ripper, each of whom have their own unique abilities.

During Season 1, we are introduced to Dr. Will Zimmerman, a former police forensic psychiatrist, who’s abilities allow him to look beyond a crime scene. These abilities made him unpopular with the police force, which had him taking time off when approached by Dr. Magnus.

In their own rights, the rest of the team that supports Magnus are all strange, from self proclaimed geek, Henry Foss and Dr. Magnus’s daughter, Ashley to Bigfoot. Season 2 we are introduced to Kate Freelander, who seems to have Cabal connections, allowing Magnus to seemingly get the upper hand. With the unfortunate departure Ashley Magnus earlier in Season 2, apparently killed off after being a super assassin, as part of the Cabal plan to infiltrate and destroy the Sanctuary.

Ashley Magnus was the femme fetale combining beauty, brains and packing a serious punch when it came to fighting the Cabal. Unfortunately her willingness to bring the conflict to a resolution by fire power sometimes got her in trouble. Kate Freelander is similar and attempts to fill the position now vacated by Ashley Magnus after being snatched by the Cabal during Season 1. She does a fair job, not sure have been all that fond of her. She is growing on me (now after 2 seasons), but how she because a part of the Sanctuary “team” just didn’t fit well.

We learn about “The Cabal” in episode three, introduced as, “a powerful shadow organization that captures, studies, and experiments on Abnormals, in the belief that the Abnormal population is a threat to the human species.” Much the opposite of what the Sanctuary was created for.

What makes the show even more interesting is the heavy use of CGI and the fact the series actually started out on the Internet as 15-20 minutes webisodes. “Sanctuary is the first television series in North America to use the RED camera exclusively. The RED camera system does away with tape and film and records straight to a hard drive allowing the Anthem Visual Effects and the series’ post production team immediate access to the day’s footage, and is capable of recording at resolutions up to 4096 horizontal by 2304 vertical pixels, four times the resolution of current day HD.” (*)

Even laced with heavy CGI, the show still has a great plot as the Sanctuary and Cabal seemingly battle head to head over the existence of “Abnormals.” You can easily overlook the use of green/blue screens, the”virtual setting” as opposed to “on location” shoots. Sanctuary is a very good series. There is a wonderful balance between character development and the science fiction nature of the show. It will be interesting to see how Season 3 plays out, which is available online. Can’t wait to see how the Kali story plays out. Rumor is there are already talks underway between SyFy and Sanctuary Productions for a Season 4.