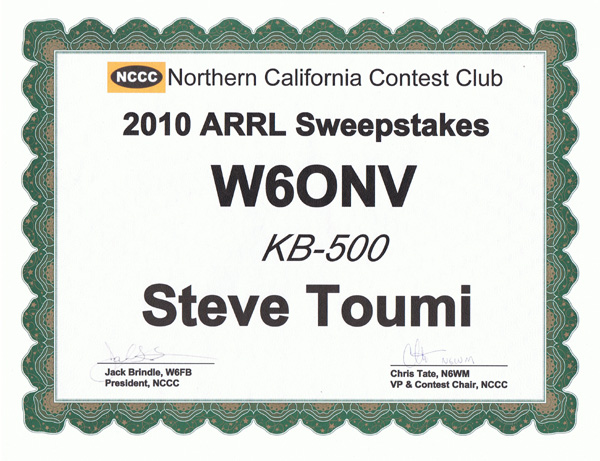 Last night at the Tied House Brewery in Mountain View, the NCCC held their annual awards meeting. This meeting rewards contesters for their success the previous year. Many of the awards center around the ARRL Sweepstakes and CQP, but there are other awards (and certificates), as well as bottles of wine by WK6I handed out through the evening.

This year was more enjoyable personally than last year as I was handed one award (KB-500) for my 714 QSOs in the ARRL Sweepstakes. I consider it a step in the right direction, as I now need to build on that success in SS later this year. Doing the match driving home from the meeting last night I was hoping to improve my combined scores by 20%, but that leaves me short of the next of the next award (KB-1000), so I must rethink my approach this year and get more “BIC” time in order to increase my combined scores by 40%!

I have attended this meeting the past two years, as I see the awards being handed out and makes me yearn to work harder and put forth a better effort, not only for myself and my personal score, but for the club score. I can only do so much with the station I have, but I can continue to improve as a contester. Participating in more contests, taking up with a multi grou (like N6RO) to gain experience or to become “HMO” (highly motivated operator) as Rusty, W6OAT gave me the definition of that acronym.

There is more to contesting than awards. Many operators don’t “chase paperwork” and while it’s nice to be recognized as a winner, I come out of every contest with that feeling if I have achieved my goals. While 2011 has started off rather slow, I am already planning full effort contests in the coming months as well as a potential CQP mobile operation (more on that later).

So while I walked out of the Tied House Brewery with a single award (which I knew I was receiving) it still made me feel good about being part of a very good club with some great individuals who work even better as a team. Big props to all at the NCCC! No other club I would rather be a part of.