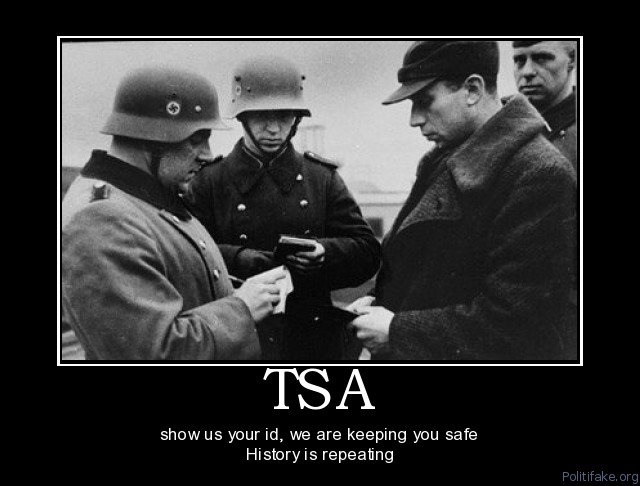 A day does not go by that I am glad I left the aviation industry for greener pastures. Aside from my former employer being in decline (and was since I started with them in 1995) after 9-11, the only “improvements” would be the window dressing we call the TSA, which is part of the DHS, who has Janet “Big Sis” Napalitano as it’s dictator. You draw the parallels.

This arm of the government continues to stretch it’s authority when it comes to “security” at the nation’s airports, while infringing on personal rights on a daily basis. Unfortunately the situation won’t improve and it likely to get more convoluted as years go by and more of our freedoms are taken away from us.You can read any number of articles I have written listed under Aviation “in”Security, that relate experiences individuals have had with the TSA. As I mentioned in the opening, it’s not getting better, regardless of what we are told by TSA/DHS or the mainstream media as it relates to “being safer than pre 9-11.”

DHS claims via their web site they will not use blood (for genetic testing) as part of aviation security. This story…rumor was perpetrated by numerous media outlets and was quickly denied by the TSA. So while they deny this piece of the story, there is truth that, “DHS S&T (Science & Technology Directorate) expects to receive a prototype DNA analyzer device this summer to conduct a preliminary evaluation of whether this kind of technology could be considered for future use.” This sort DNA testing is currently used “in some cases to establish familial relationships in refugee processing.”

The statement by TSA officials leave the door wide open for additional uses by saying, “…for future uses.” As it stands now pat-downs are a very invasive procedure, which can be humiliating as agents violate an individual’s intimate body parts. This procedure, now commonplace at security checkpoints, along with heightened security procedures allegedly makes the USA safer from terrorists, while making you feel dehumanized. Don’t you feel safe already knowing the TSA (DHS) wants YOUR blood?

Sadly, the TSA and DHS have failed. “Big Sis” continues to throw her weight around, as did Chertoff before, who is now reaping millions from his dealing with Rapiscan. I found a great quote from an anonymous source,

“The point of security failure was with TSA itself. By the admission of DHS secretary Janet Napolitano, the current system [was] designed to nail people of interest didn’t work…it’s a case of “garbage in, garbage out,” where you get so many false positives and innocent people added to the list that it’s easy to let someone like Abdulmutallab (Underwear bomber) pass by. And if there wasn’t proper equipment at the airport to detect the chemicals he was carrying, where were the security teams?”

If you are unsure about the DHS S&T, read up on what that “directorate” is all about. Their objectives including:

Things won’t ever get better. This is only the beginning. While air travel will still be a necessity, the hassle of getting through security will continue to get more complex. The Nazis were well known for their “directorates.” I can see the DHS S&T playing a more vital role “in the future” as current procedures are far from acceptable, but as long as the public continues to travel, they will accept whatever procedures are put in place.