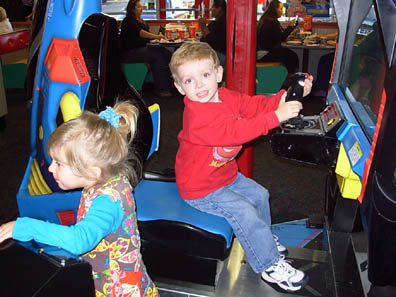 So our son, Zachary (aka Zoom) turned 3 years old today. And yes, he is growing up quite fast. It seems it was only yesterday and he was a newborn. Thankfully we are done with the “terrible twos” and moving on. Lord only knows what we can expect.

In reality, he is a very good kid, thankfully he is better than some of his friends, or at least what we, as parents, can see. We had the party at Chuck E. Cheese last night. Zoom was excited! He and I spent about 30 minutes when we got there on some of the small rides and playing a few of the games. But at age three, I still think he is just a bit young for CEC.

He was simply spoiled last night with presents as well. I don’t ever remember getting the sort of stuff he did at 3 years old. His grandpa (mom’s dad) bought his a big H3 Hummer remote control car. Of course he thinks it’s great fun now. Just wait until I actually turn it on and he drives it. Although I think he is a bit young (toy was age 8 years and up) for the truck, no doubt we will be playing with it later this week.

So when you are old enough to read this Zoom, happy birthday son. You are the most important thing in my life!

During my educational years I attempted to learn two different foreign languages. The first was back in my pre-high school days, when it was Spanish. Needless to say, I did not like the class and did not do well in it. So I never went back to it. During high school I made it though 2 years of German. I attempted to continue this during my first year at college, while attending BYU. I was taken back by the “level” of teaching. Maybe I wasn’t prepared. But the first day of class, not a word of English was spoken. I guess this is the “immersion” style of teaching a new language.

Now some 20 years later I return to learn a foreign language to learn. I decided to start with Spanish (Latin America) because we ARE in California and it makes sense, as this is sort of the basis for other similar languages such as Italian and Portuguese. I had been looking at Rosetta Stone.

The only setback to learning with this program, which received some excellent reviews was the price of all three levels, $549 based on their website. A steep price no matter how you look at it or attempt to justify it. So talking to another ham operator on IRC the other day and I was able to “obtain” the language packs. I was also able to find the core Rosetta Stone program.

After about 30 minutes of decompressing, installing and configuring I was able to get Rosetta Stone up and running as well as all three levels for Spanish. Interesting to note, while at BYU, they did have one of the best linguistic centers in the Missionary Training Center (MTC), where young men and women are sent prior to going on their “Mormon Missions” in order to learn their new language. Rosetta Stone uses a similar “immersion” process in order for someone to learn.

I started Spanish Level 1 last night while at work and was able to learn some basic words (nouns) and actions (verbs) as well as some simple sentences. I was rather impressed to see what I retained and could say in 30 minutes. Again, this is an immersion process, where you read, write and speak in Spanish, there is no English to supplement the learning process.

As for my reasoning to learn a new language, it was somewhat perpetuated by the fact I play soccer with seven Mexicans and the running joke was I had no idea what they were saying when we were on the field. I would like to see my son grow up knowing a second (or third, Morse Code counts as a language, right?) language. It can only be beneficial as they grow up.

So hopefully three months from now, sooner possibly, I will be fluent in Spanish and be able to read, write and speak Spanish. Once learned, I do hope to try Italian as well.

I will never, never understand the need to sit outside a closed store, the night prior to Black Friday, for 4…5…6…or more hours waiting for a retail store to open. I only mention this because I know there are people who do this faithfully, every year. I, am not one of those. There is nothing in this world that would allow me to freeze my ass off all night, just so I could get an item as a “discounted” or sale price.

I write this tonight, because when I passed by a Best Buy store in Concord, CA the line was already half-way around the side of the building. This at 10:20pm. The store doesn’t open until 5am. What the hell are these people thinking? Why? Is there fun and and enjoyment this this exercise? Sorry to say, but I will hold off all my shopping duties until the day before Christmas, as I have done for the past 5 years or so, well since I have been married. I might not save that extra little bit of money but then again, it probably was not an item I even needed to buy. 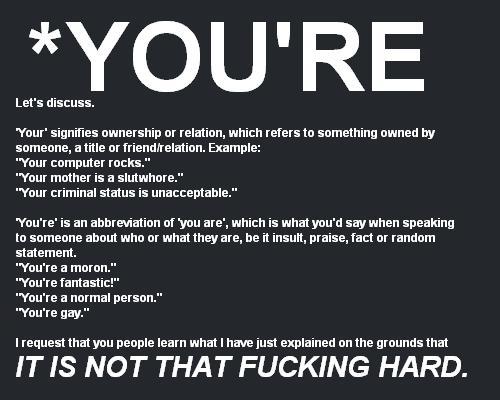 I think this goes without saying. There are some people who just do not know the difference between the two words. They are not the same. So read it and reread it. If you still don’t understand then you’re an idiot!

I’ll consider myself lucky I am in good standing with my HOA Board of Directors and the management company. I have had two violations in the past, one was for having piles of leaves in my front yard. Yeah, as ridiculous as it sounds. The second violation was for erecting the 6-BTV on a mast that raised the vertical to some 40′ in the air. On both occasions I received violations letters.

After making my antenna presentation to at a HOA board meeting I feel I have the group on my side. That is not to say they won’t overturn their previous decision on antenna, but I do keep in regular contact with the management company providing a list of contacts, dates, times and power used. This way I have a fighting chance if allegations are brought against me regarding any interference issues.

Yesterday in the mail I see the management company sent out and upgraded and approved landscape policy. Thankfully I am in full compliance with the rules, but there are many in the development are not…not even close! While the interior of our house is still circa 1989, the front and back yards have been landscaped, but prior to this the front yard, which is what the HOA governs, was in compliance with the rules.

There is no grandfather clause for the landscape policy and the management company states they will continue to send violation letters and “possible” fines. I have called the management company regarding the house across the street that has been vacant for about 3 months now. There is no one living in the structure, but it is not bank owned, which I assumed it was. The owner is in clear violation of “failing to perform maintenance.” The yard is nothing but dead grass, plants and weeds growing. How can this be in compliance?

The policy goes on to state, “the Board may have such maintenance and/or repair done.” But when I was speaking with the HOA they told me they did not have the funds for the upkeep of yards of bank owned homes. Obviously, they don’t have the capital or desire to follow through on their own policy.

It’s unfortunate homes and yards in the development look like shit…I compare it to “white trash.” I don’t want to rock the boat and start calling the HOA on every home I see that is in clear violation, obviously I can’t be the only one who sees this. If they can spot a 40′ vertical antenna why can they not spot dead grass, weeds and front yard in clear violation of the landscape policy?