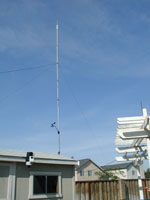 Yeah, that is right, I said erect! After a few weeks of waiting until I had free time and a spare set of hands, I finally got the Hustler 6-BTV up in the air. Actually that happened last night, but it was not until today I was able to finish it up by adding a few radials on 15m and 20m. Although, as I sit here, both frequencies are dead, unlike last night when I landed a ZL (New Zealand). Although that might be classified as falsification, since I didn’t make contact with him, but heard him nice and loud on 20 meters!As for the 6-BTV, I had not heard a damn thing tonight. Of course maybe this is what I get for going against the HOA and their damned CC&Rs. Would serve me right, but the vertical has been up for about 6 weeks and there has been no comments of any kind made, either in written form or passing of a neighbor. So I am keeping my fingers crossed. 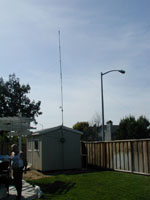 I continue to bounce questions off my father (N6SV), now granted he has not worked any of the bands since the mid-1980s, but he is still a wealth of information, dated but most all of it still relevant. He said, “you have to make use with what you got.” And I don’t “got” a lot in terms of space, which is technically what I need in order to make this vertical working better then it currently is. Hopefully when the solar cycle brings better conditions I will have better luck and maybe more radials. But for now, I will see what comes my way. I am still rotating the dial and watching some of the “spots” web sites like DX Watch to see where some of the most recent activity is. Regardless I am thrilled to finally have my first HF shack online. Now to work out the new problems!