Yet more and more gamers are finding Urban Terror. Based on GameSpy Stats, Urban Terror has consistently been in the top three positions, yet to top the charts at the most highly played game/mod for Quake III. That is a true testament, not to Silicon Ice Development, but the community that supports the mod. Thanks!!!

Also had a glance at Gerbil‘s level, Pressure Zone. Unfortunately, he is still running into a few shader problems, which he is currently working through. This level is nothing like mbase, or the Urban Series from Action Quake 2. Actually, it is nothing like we currently have in Urban Terror.

This just in from WetWired, he has begun work on another new map. Sorry, but I am not at liberty to mention anything about it. He is currently working on a police station called ut_precinct for Urban Terror. While this map will not be included in the upcoming map pack, but most likely Beta 3. Based on screen shots, it should prove to be quite an impressive level.Check out these shots: 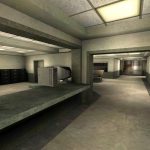 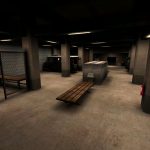 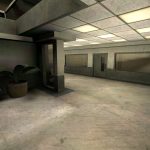 WetWired commented, “…the map is less about eye candy and is more my attempt to get the perfect scale and realism…I don’t think we will be seeing it til beta3.” There you have it, from WetWired himself, three never before seen shots of ut_precinct.

From the Urban Terror Forums comes more p1mpage on upcoming levels that are being developed by the community. This level is yet untitled, but it is being created by Golgo13. “Ok…keep in mind that this is my first map, so go easy on me! It’s a downtown area of a city of some sorts,” says Golgo13. Click here to check out what he has been up to and give him some feedback on the screen shots he has provided.

Also, one non-Urban Terror note. Apoxol has been working on a small side project called, ProBall. This mod is nowhere near as complicated as Urban Terror, just more comparable to QPong Arena or GridIron, if any comparison needs to be made. From the web site, “PROBALL is a simple Quake III mod where the objective is to throw the ball into the other teams goal [sounds simple]. There is a single ball that spawns in the center of the map and two teams which spawn near their own goal. Both teams rush for possession of the ball and then attempt to pass the ball around to each other to score it in the enemies goal.”

As of 26.07.01, Alpha4 is available for download. There is even a test server running. Check out Proball and visit #proball on irc.enterthegame.com.