This weekend amateur operators around the United States participate in the ARRL sponsored Sweepstakes. It’s a two part contest (of sorts) using the operating modes CW and SSB in two separate weekend. There are many individual awards, of which I won last year for my ‘section’ (East Bay) give my precedence (power) in the contest (read 2010 Sweepstakes Award). More importantly is the club competition, which each member of their respective club participates in.

I was surprised and pleased to be rewarded with a certificate after last year’s contest. You can read my write up last year’s contest, but based off that information and predicted solar conditions, my score should be better than what I achieved last year. Usually I figure an increase in score by 20-25%. Based off my 366 QSOs last year I figure 439 QSOs this year, but am setting a goal of 500 QSOs and another “clean sweep” working all 80 ARRL sections and Canadian provinces.

Unfortunately I am at a bit of a disadvantage and the contest as not even started. I lost 15M on my Yaesu FT-1000MP, possibly a Local Unit program as diagnosed by Wa4GEG. This leaves me with 10M and 20M through the entire contest. 15M should have some good openings east for stations on the west coast, so I could lose out on quite a few points by not being able to use this band.

Conversely I missed out on many points last year by not operating on 40/80M on Saturday night (PDT), so what I lose by not operating on 15M I hope to gain working on 40M and 80M. Hopefully this  holds true and I can and when I break for the evening I will have close to 300 QSOs already recorded, which would be only 66 off my total of last year.

Of course I am looking at it optimistically. If conditions due hold and we experience no rain (noise/static) then I will need to really work 40/80M, which aren’t my best bands, but the low bands are needed to have success. Between the 2 bands last year I recorded only 89 QSOs, I hope to double that output this year to 175 QSOs.

With no contacts on 10M in 2010, this band could replace 15M for me, which saw 48 QSOs last year. I am planning 75 QSOs this year and depending on how the band holds maybe even an increase over that number. No matter how I look at it my “BIC” time will be equal to or better than last year. I put in just under 16.5 hours, missing 23-10z and calling it quits at just prior to 03z on Sunday.

I have moved the hex beam and now approach 40′ in height, which seems to be the optimal height for this antenna. I am now able to get the hex just above the roof pitch, which should be a plus. I also installed a replacement rotator on the mast a few days ago and aligned the antenna. Unfortunately there won’t be much moving the antenna in SS this weekend.

The only other event I have this weekend is a soccer game at 14z (9AM) Sunday morning, which will take 4 hours of my required time off. I hope to work 20 hours, but realistically it will probably end up somewhere between 16.5 and 18 hours when I turn off the radio and call it finished. Regardless I look to have a good time, which is the main factor in participating in a radio contest. 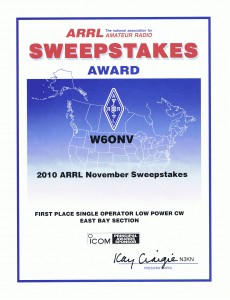 It’s not all too common I win any sort of award from the sponsor when it comes to contesting. If I pick and chose my class and power, I might have a slim chance at winning some “wallpaper” for the shack. Wallpaper is the ham radio term for awards and after 3 years of contesting my walls are still somewhat bare, but it’s not necessarily about winning for me. It’s about participating and achieving the goals I set prior to any contest.

Today I received an envelope in the mail from the ARRL. I thought it might be an award for an achievement like WAS or Triple Play, but I could not recall submitting any paperwork recently for an achievement award. I opened the envelope and was surprised to read I was ‘First Place Single Operator Low Power CW East Bay Section.’

As for as I know this is my second award, the first coming in 2010 participating in the CQWW WPX RTTY Contest I have won participating in a contest. Still it’s exciting to win awards like this and now has me rethinking my strategy for the 2011 Sweepstakes which takes place next month. Hopefully I can improve on my 2010 score and duplicate my effort on CW.

I was listening to the local repeater yesterday afternoon while driving home from work and it seemed to be a flurry of activity as the local club was working in setting up their field day site and quite a few operators were using the repeater. One operator who chimed in asked what they were setting up for this weekend. An organizer at the site they were setting up radios and antennas for the Field Day contest.

The objective as described in ARRL Field Day packet is:

“To work as many stations as possible on any and all amateur bands (excluding the 60, 30, 17, and 12-meter bands) and in doing so to learn to operate in abnormal situations in less than optimal conditions. A premium is placed on developing skills to meet the challenges of emergency preparedness as well as to acquaint the general public with the capabilities of Amateur Radio.”

Nowhere is it described as a “contest” even though scores are submitted, recorded and printed in QST. Some consider it to be a “non-contest, contest.” Okay. To be honest, I have never placed much emphasis on operating in this event. I did log some contacts last year as a ‘1D’ station (home station, commercial power) I did not submit my log to the ARRL. I did not demonstrate any of the objectives as defined by the ARRL.

This year I am still not placing much emphasis on the event. Unlike last year I will power my station using a gas powered generator (1E) at 100 watts. I am guessing I will maybe log 60 minutes of operating time, but probably won’t bother submitting my score.

Much like ARRL Sweepstakes, which I didn’t understand before participating in it, Field Day doesn’t excite me as an amateur radio operator. I do believe it holds some important keys to what we do as operators, such as getting a station on the air using alternate power, developing skills for emergency situations and most importantly introducing non-hams to the amateur radio hobby.

It could be fun to grab a portable antenna or two, head up to the peak of Mt. Diablo in Concord, CA and see just what I could accomplish with 5-10 watts of power. I can’t see putting much effort into this event, maybe my opinion will change in the coming years. July is almost here and the summer time NAQP. Looking forward to these contests!

Just hours away from the start of the ARRL Sweepstakes- SSB Contest this weekend and I am not liking how the weather is shaping up. A cold front moved through last and another low is forming out of Alaska, which will bring more rain and the possibility of thunderstorms over the course of this afternoon and tomorrow.

I started Sweepstakes practice with the NCCC last night around 730pm local for 30 minutes. The first 10 minutes I spent spinning the dial on 40M looking for any contacts and was greeted with nothing more then S9 noise from rain static. It was terrible!

Jumping over to 80M wasn’t much better, I made a total of 5 contacts, all of which were different ARRL sections, which was a plus. The noise was still bad, S6-S7 for the 20 minutes I was there. Hopefully there will be a bit of relief when I move to 40/80 later this afternoon and into the evening.

Hopefully the NCCC rallies on 40/80M go well and I am able to work many contesters during that period. I might even knock off sooner than planned if the noise or weather is not cooperating. This would probably do in my goal of 634 contacts, but until we get about 4-5 hours into the contest I won’t know. With any luck I will be able to pull in some good numbers on 15/20M at the start of the contest and have a good foundation on which to build.

There is excitement in the air at the NCCC as the club currently has the lead over PVRC after the CW portion of the ARRL Sweepstakes. But now the challenge really begins. SSB. I have been looking over data from last year, as well as my results from the CW potion nearly 2 weeks ago and have come up with what I feel are challenging, but achievable goals.

In 2009 I experienced my first Sweepstakes. I was hoping for the “clean sweep” but came up short in both legs. This year I had a better idea as what to expect and it was reflected in my score.  Still I was not able to operate a full 24 hours and missed out on 7.5 hours of operating because of family commitments. That was potentially another 165 Qs (based on my 22/rate over the contest) I missed out on, which would have put me at 531, well over my goal of 400.

For SSB I am looking to take home a ‘KB1000’ Award this year. After my 366 CW contests I am setting my goal at a very achievable 366 Qs. That equates to a 26/rate IF my butt stays in the chair for the complete 24 hours. That will be my toughest challenge because of my wife working and my 4 year old son competing for my attention. I am figuring for a higher than 26 rate to start the contest and until I we move to 40M, followed by 80M as the sun sets on the west coast.

Since I was able to achieve a “clean sweep” relatively easy 2 weeks ago I am planning on working all 71 ARRL and 9 RAC sections. That will max out my multiplier, which will allow me to work on my rate, which is what I hope to be over 26.4 for the entire contest. Right now, I am not sure what sort of noise I will have with rain (and potential thunderstorms) in the forecast. Hopefully it’s not too bad and I can at least maintain a rate that will see me achieve my goal.

But more important then my personal goals are those of the club. N6WM has been pushing for CW operators to get their butts in their chairs and work the SSB contest. We need every QSO and every log submitted to the ARRL. The NCCC is attempting to recapture the coveted gavel from the PVRC who has won SS in 2008 and 2009.