Ever have a project you expected to take a short period of time, but in the end you spend much longer than anticipated? While my “STD List” is long…that’s my “shit to do” list (thanks to Greg for the acronym), I thought I would take a few minutes to fix some minor issues on my hex beam antenna yesterday. I assumed it would be quick job before moving on to trimming bushes, mowing the lawn and taking care of things I do weekly. Well 90 minutes late the antenna was torn apart and I was rebuilding it in the backyard.

It was something that needed to be done, but I dread trying to get the antenna down from the mast, which is 34′ in the air mounted to the upstairs portion of the house. I thought I could do the repairs on the roof, but all I got was frustrated, along with sunburned, so I made the decision to lower it to the ground, knowing I would have difficultly remounting it.

The work took about 4 hours yesterday, as I untied all the elements and remeasured all the pieces back to their original factory recommendation. I also cleaned up the antenna, which was all for not since the spider colonies will be back within days I am sure. Hopefully I was able to correct an aesthetic problem with the fiberglass spreaders that are bent upwards. Think of an upside down umbrella (or see some images here).

I spent 2 hours this morning preparing the mast and rotator in order to return the hex beam to it’s perch, just above the peak of the house. I had hoped to add a hole for a cotter pin in the mast that would allow me to raise the antenna 50′, but quickly ditched that idea.

I had to make two attempts to get the antenna, which is 22′ in circumference, from the garage roof to the second story roof. I knew it was going to be a challenge, but was able to accomplish it on the second try with no major issues. I figured I would encounter more problems than I did, but that was not the case. Thankfully the antenna is fairly light weight and even with the wind blowing, does not really waver.

While this project was not a “must do” item on my list, I am thankfully it is done and out of the way. There are a few summer contests on the horizon that I will be hoping to work in. The first is ARRL Kids Day, hopefully I can get Zachary to make a few contacts this year, as we had no luck last year. Hank, W6SX has talked me into working ARRL Field Day and trying to run FD stations to improve my Morse code receiving, as practice for CQP, which takes place in October. Finally in July it’s the IARU World Championship, if time permits (as well as the XYL) I will put in a full, 24 hour effort. 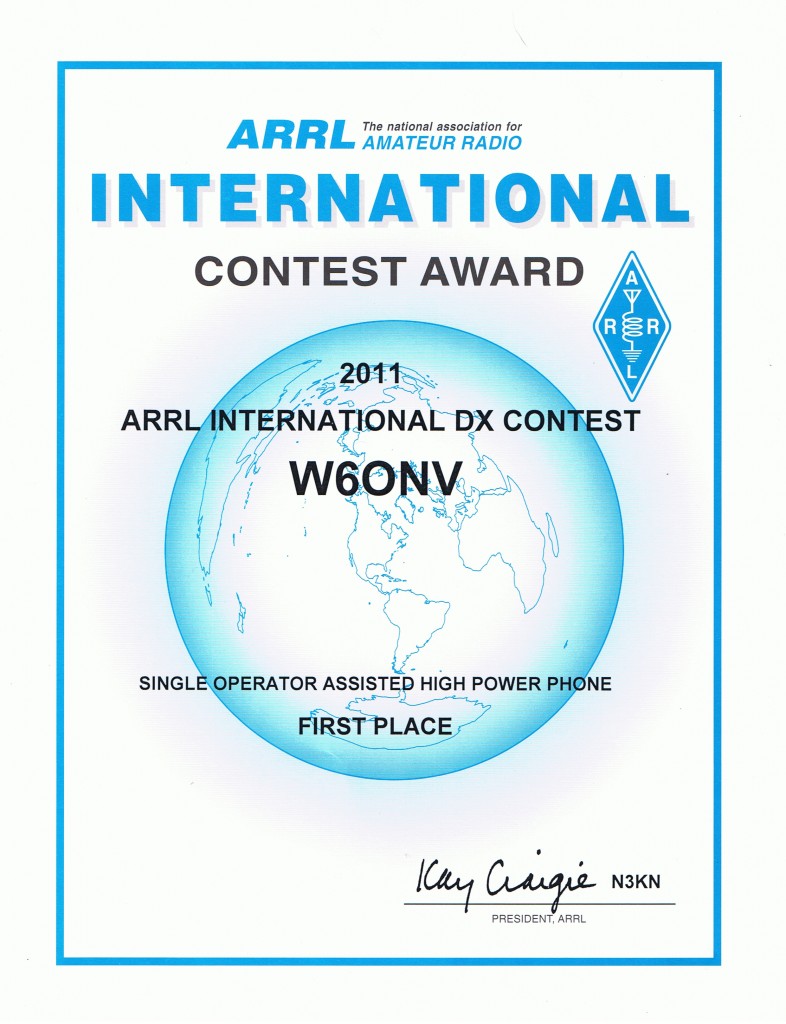 Very surprised to see a manila envelope from the ARRL (American Radio Relay League) today in the mailbox. I figured it was my ARRL Triple Play Award I had finally achieved. When I opened it I was surprised to find I had taken first place in the 2011 ARRL International DX Phone Contest. That means I just might have to taken to March 3 off to participate in at least half the contest.

On the NCCC Reflector this week there was a message sent about the initial results being posted by the ARRL for the 2011 Sweepstakes CW. After reading through a series of comments from other KB’ers I decided to check the initial results. I was happily surprised when I saw I had retained my title from last year (last year’s win) winning the 2011 SSCW in the single operator, low power, unassisted category.

For me, it’s about picking and choosing a category I can be competitive in. Winning is nice, but not necessarily the priority for me when it comes to “BIC” and participating in any contest. It’s nice to achieve a winning effort and while they haven’t been all that often, it is nice to know I can compete. Granted, I was only competing against 8 other stations, but this effort was a daytime operation only since I had all sorts of complications on the low bands (40/80M) with my SteppIR BigIR. Unlike 2010, when I had 88 low band contacts, 2011 yielded only 2, the bigger difference was 10/15M.

With any luck I can put aside all the station issues, find a full effort and really see what I can do. Based on my numbers from the last 2 years a goal of 600 QSO (all S & P) is possible. Then again taking a chance and running a frequency should allow me to easily achieve this goal, but I am still not as comfortable running as I am in S & P. So there is a big tradeoff in my rate. We still have 10 months before 2012 Sweeps, but I am already looking forward to what is the most enjoyable contest for me.

The best laid plans…isn’t there a say about that? Heading into Friday I was thrilled to have Saturday off to participate in the first big contest of 2012, the ARRL RTTY Round up. I had hoped to put in a full 24 hour effort, unfortunately I was not able to get Sunday off from work, so my 24 hour effort was suddenly cut in half and the contest was still a day away.

The one thing nice about contesting in the world of amateur radio is, if you miss one this weekend, there is one next weekend. Sure, it might not be the same mode and RTTY is a favorite mode of mine considering all the hardware issues I have recently had, coupled with the fact the insurance claim took most of 2011 away from me and I would have felt too guilty to spend time in a contest when I had remodeling to finish.

While radio is a hobby of mine, family and friends take priority. That was the reason I spent only 46 minutes at the start of the RTTY contest participating. All but about 5 minutes was spent on 10M before moving to 15M right before I shut the radio off and hung out with a friend in need for the day. Thankfully it was wild card weekend in the NFL and we sat around drinking beer, eating pizza (or potato leek soup in my case) watching football, with a spattering of discussion over his situation.

Not sure if our time together was beneficial to him or not, I hope it was. I know there have been times in my life where I needed a friend and thankfully my buddy went above and beyond to spend time with me and discuss my situation, for that I was very thankful to know I have friends like that in my life. Sometimes just being there for others allows you to escape the current situation and just have a bit of a break from life before you must think about situation at hand. Maybe a Saturday together with pizza, beer and football was a well needed break for him.

Contesting seems to be very tough for me with a 6 year old son, my wife’s work schedule and the fact that I don’t have weekend off, when most all of the contests run. I do wish I would have been more involved in contesting when I was first licensed (1995) or even earlier when I didn’t have so many responsibilities to fulfill. While it’s not a problem, you don’t look at what you missed out on, but what is coming up. Thankfully that is a long list that runs the rest of 2012 and every subsequent year.

With any luck my schedule and priorities will allow me to participate in the winter sessions of the North American QSO Party. The CW contest is January 14, while the SSB contest is a week later on January 21. Just like last year I was not able to participate in either contest, but only have 2010 numbers to go off. With any luck I will be able to put in a full effort for both contests, but we will see what happens.

I guess this one of those instances, where you cherish the family and friends you have, forgo contesting and be thankfully for the people around you. Sometimes it might seem difficult to set aside but contesting won’t go away. The last thing you want in your life is for family and friends to do the same.