Out of curiosity, I jumped into the public league for the roll out of FPL Draft. I entered the season with no expectations, after spending 37 years playing fantasy (NFL) football, I have gotten quite bored with the snake style draft and use of the waiver wire and free agency. I also felt that 8 teams wasn’t enough for a competitive league. Looking at it, 10 could potentially be too many. So I reserve judgment until the end of the season on just how successful this fantasy game would be. Now onto my GW3 retrospect. 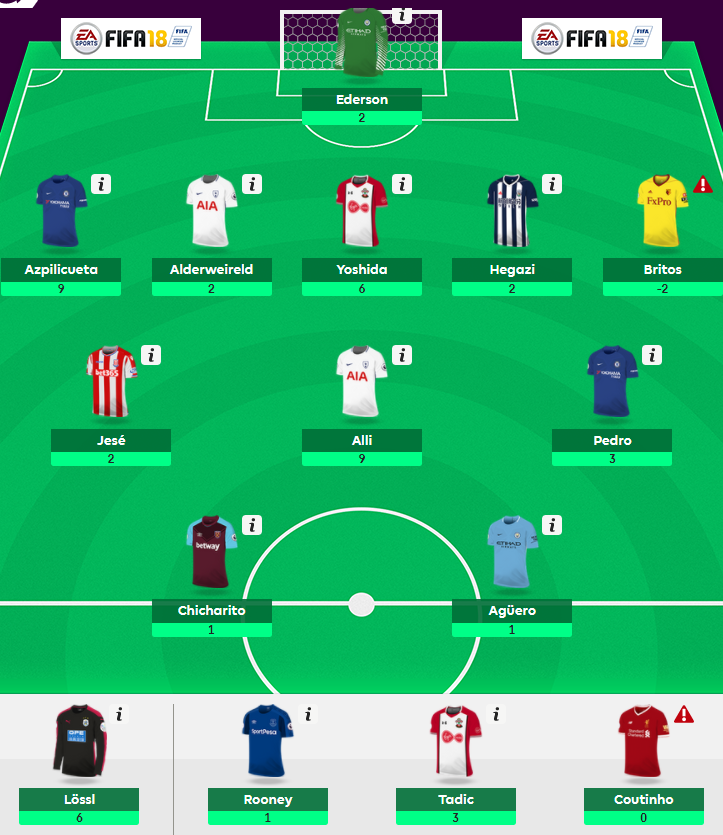 I entered GW3 in third place on 80 points (56 pts & 24 pts), but finished the week on 35 points. With a total of 115 points, I lost one spot, now sitting in fourth. Expectations were high, as I had made 5 transactions heading into the game week. The only non-starter of the bunch was Jonas Lössl, who actually outscored Ederson. Other transfers for the weekend include Miguel Britos, Jesé, Ahmed Hegazi and Javier Hernandez. None of these “hot players” fared well, totaling 5 pojnts, including a -2 points from Britos, who was red carded.

Thankfully it was Azpilicueta, aka “Dave” to the rescue with 9 points on an assist, CS and bonus point, while Yoshida picked up a late assist and bonus point for 6 points. The midfield struggles continued, thankfully Alli picked up the slack, as Kane remains goalless in August, with a goal and 2 bonus points. Pedro, now fit started over Tadic, but the decision was a wash, as both midfielders finished on 3 points.

On paper I like my forwards, led by Aguero. We saw the displeasure on his face as he started on the bench away to Bournemouth. He did make a cameo and get 24 minutes of action. Chicharito, coming off 2 goals against So’ton played the full 90 minutes but picked up a yellow for just a single point. The decision was made to leave Wayne Rooney on the bench, but his 1 point was no better than the starters.

It’s my belief that the struggle is real based on the fact I am without a second round selection, as Phillipe Countinho continues to feign injury, looking for that exit before the transfer window closes. No points through 3 weeks and the real fact that he could be on his way out doesn’t leave much available that can replace a player of that caliber. The newly acquired Swansea man, Renato Sanches might be an option, but hasn’t had a good year. Other options include Klaassen, Zaha and Lanzini, all three I have already owned and dropped. Redmond is available, but the lack of So’ton offensive is worrisome. In fact none of the “budget” type midfielder (although there is not budget in Draft) aren’t impressive, which has me lining up my starting XI in a 5-3-2 formation.

While we wait for the transfer window to close and the EPL restart after the international break, I am a team with needs. The uncertainty at City, which we knew was coming from Pep has be concerned about Aguero’s pitch time. West Ham United being a complete shambles has me wondering if Hernandez will be a viable two or three option up front. With all the shit I talk regarding the traditional FPL, I went against my better judgment and picked up too many hot players; Hegazi, Britos, Jesé and Chicharito. None of which followed up their GW2 performance to provide me much confidence.

I do believe the season will hinge on Coutinho, if he does indeed move, I will struggle the rest of the way, relying on rotating midfield to carry my #5mandefence. With any luck, as the strength of schedule changes, Rooney will be reintroduced as a weekly starter (GW6). Hernandez appears to have good fixtures through GW13, minus fixtures hoem to Spurs and home to Liverpool.