On the horizon, as we approach GW3, we see the first international break, followed by the close of the transfer window. The urge to activate our first wild card is high, based on two very inconsistent game weeks. Those managers who knee jerked for GW2 probably weren’t rewarded, as expected and now rank lower in the OR, looking to possibly salvage their season just 3 weeks into this season.

Sitting on 96 points, ranked 2.2m, I am 35 points off from where I was this time last FPL season, still contemplating my starting XI played for GW1, which included just a single Man United player, Antonio Valencia. With their fixtures, I initially planned Lukaku and Pogba but moved both these attacking players and went a different direction. That’s a massive difference of 61 points (assuming I captained Lukaku) pushing my total to 157 (26 point improvement over last season)! Yet decisions I made at this point have cost me. 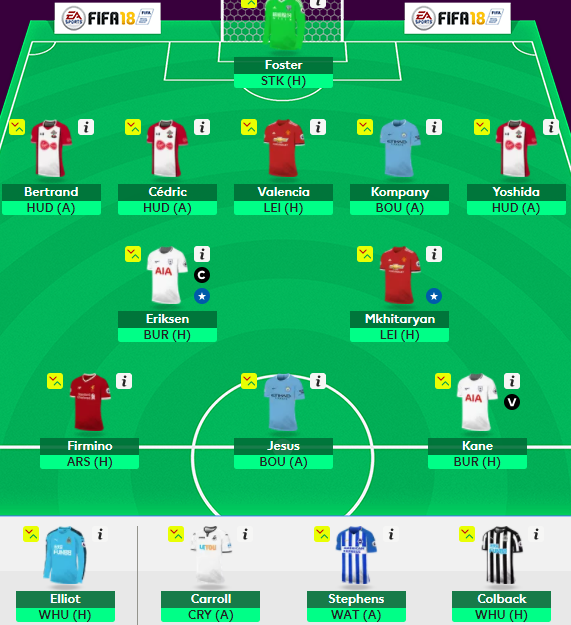 Now midweek, what direction do we go for GW3? I burned my FT on Monday, knee jerking KDB out in favor of Eriksen, more for the £0.1m increase than paying attention to City’s away fixture to BOU. A wise fantasy manager would have held KDB, let the £0.1m slide, giving the midfielder a final opportunity before offloading the £10.0 price tag.

In defense of that move, I gained £0.1m (TV now £100.2), picking up Eriksen who faces Burnley at home, on he back of 3 assists to start the EPL campaign. Doubling up on Spurs worked to the advantage of many mangers last season, there appears to be similar appeal this term. We can debate who is better all season; Alli or Eriksen?

This same argument can be applied to Man United and their midfield duo of Pogba and Mkhitaryan. Both players are off to a smashing starts, boasting 23 and 21 points respectively. Couple that with the league’s top forward in Lukaku and it’s possible you run with two attacking doubles in your starting XI.

All this and we haven’t even touched on defense, other top teams or the fact we are still missing some big names due to health and fitness reasons; Coutinho (£8.9), Hazard (£10.5) and Sanchez (£11.9). This gives managers another reason to hold the course and not activate the wild card, as all three are impact players to their team, the league and FPL.

With only 2 weeks of game data to extrapolate, it’s difficult to formulate a short term plan. Which budget players will continue their strong starts and which will fade? As a Watford supporter, I am pleased with Marco Silva’s start to the season, behind the play of Richarlison (£6.0/15 pts.) and Doucouré (£5.1/12 pts.). New signee, Jesé started his Stoke City career with a goal and 231,000 managers have transferred him in. Aaron Mooy (£5.6) has made an early impact at Huddersfield, as the Australian bagged an assist and goal, along with 2 CS in the first two. Running a 5-2-3 currently, I have no budget to spare, using £4.5 midfielders.

Defensively, I took a big risk starting a 5-man defense, while it paid off in GW1 bagging 6 clean sheets, GW2 was an entirely different story. Backing a defensive line featuring So’ton’s, Yoshida, Bertrand and Cedric yielded just 7 points, after giving up 2 goals to a 10-man West Ham squad. Man City had good fixtures to start but the expected CS in GW2 ended up a 1-1 draw. Man United has exceeded expectations, scoring 8 goals, conceding zero. Hopefully the CS parade will continue with LEI/sto the next fixtures.

Valencia was my top defensive prospect at United, but hasn’t been played well, an average position in the middle of the pitch. It appears in a 4-man defense, Valencia isn’t getting as far forward, which will limit his attacking returns. Conversely, Marcos Alonso…well GW2 speaks for itself, as be scored a brace! Currently with £1.0m ITB, I could be convinced to downgrade Valencia to Bailly, banking £0.5m ITB and introduce Alonso for Bertrand.

Looking forward through Gameweek 5, I am after a defender who’s posted good form and fixtures against lower teams in the EPL. No surprise, So’ton is on top, but the likes of West Ham, Newcastle, West Brom, Brighton, Huddersfield and Crystal Palace all fit the bill. Based off back-to-back clean sheets, it’s Ahmed Hegazi (£4.7/23 pts.) who could be the budget defender to continue posting premium numbers. Mathias Jorgensen aka Zanka (£4.6/16 pts.) and Christopher Schindler (£4.5/15 pts.) are strong candidates. For Nick and Tom at WGTA, I also include Allan Nyom (£5.0/15 pts.) because of #nyomwatch!

Looking ahead an unknown still lurks on the sidelines. We have not seen Alexis Sanchez, Eden Hazard of Philippe Coutinho set foot on the pitch. All three players were instrumental in their team’s success in the 2016/17 season. Sanchez and Coutinho have been linked with moves away their club during this transfer window. However it appears both will remain with their respective clubs and feature in the starting XI. Hazard is returning to fitness after injury and will take his place to strengthen the Chelsea midfield. Prices being what they are, this just add 3 more high priced players to the mix to muddy the situation as we head towards the international break.

What options does this leave before the start of GW3? As mentioned earlier, activate the wild card. Personally, my team isn’t bad, I still have confidence in my starting XI, so I don’t want to activate it yet. The newly coined, ‘Free Hit Chip’ would allow me to shift players for GW3, as my team would revert back to a GW2 lineup at the end of the game week. Yet, some question surrounds when best to use this chip. Bye week? DGW? Christmas period? Week with strong clubs playing weaker ones?

Realistically, I am left with two options. First, do nothing. I used my weekly FT and will just run with the starting XI I currently have. Fixtures are good over the entire pitch, which leads me to believe I could post season high score. Second, look at taking a -4 point hit. Even though I still feature 3 So’ton defenders, a home fixture against Huddersfield could work in my favor. One hit option would be to move Cedric or Yoshida in favor of Hegazi. Not quite sold on the big Egyptian and his offensive abilities, but like Foster has bagged two CS to start the season.

As I toil away looking at the impending weekend, there is a high probability I won’t make any further move, including a -4 point hit. I will ride into GW3 high on the potential of what my starting XI could return based on their fixtures. This would allow me a 2-week period to decide how to move forward for the next 3 game weeks, keeping my fingers crossed none of my starting XI pick up a knock to futher complicate the situation.