Interesting to note how this season’s squad parallels last season’s through just 2 weeks into the EPL. This time last year after GW2 I was writing, “Bring on the green arrow, as I improved my overall position to 182k, jumping some 119k spots with 72 points this weekend.” It wasn’t until Gameweek 3 that my squad took a turn and scored just 39 points, following an “average” 59 points in GW1. This season after starting with 58 points, my squad returned just 38 points as the starting XI continued to struggle, yet there is continued support of some players based on their underlying statistics. The recent theme since a dismay Man City performance has been”wild card.” Do you or don’t you?

Unlike last season I am attempting to practice more patience with my starting XI than I had last year at this time. The GW2 transfer of Zaha was necessary, as his injury will hold him out of action for approximately 4 weeks. However, picking up Mkhitaryan was a perfect replacement, providing another 2 assists, now leads the league with 4. Prior to the start of the season I was hoping to roll the first FT over to GW2, which would allow 2 transfers as we approach GW3. Now, only Tuesday I have already activated my FT for GW3, finally losing patience with KDB and doubling up with Eriksen in my 2-man midfield. Knee jerk? Eh…possibly but Spurs face Burnley at home in GW3. More on Spurs later. 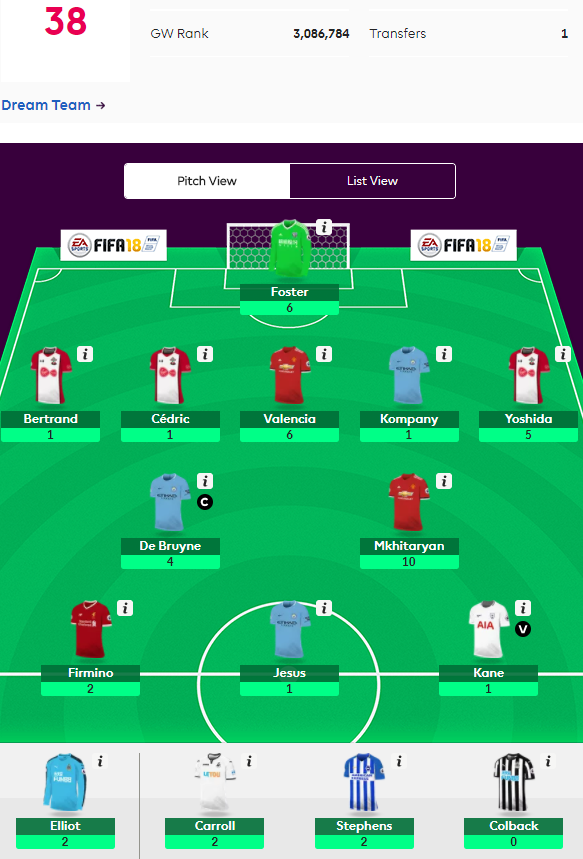 With heavy reliance on defense, the lack of a clean sheet from So’ton hurt any chance for a positive contribution. It wasn’t a complete loss, as Foster picked up his second CS on the season, as did Valencia, who doesn’t look as attack minded in a 4-back set for United. Thankfully Yoshida picked up a very late assist and 1 bonus point to salvage 5 points. The combination of Bertrand, Cedric and Kompany combined for 3 points. Still, I am high on Kompany, as long as he remains healthy, but didn’t expect City to bleed Rooney’s 200th goal yesterday at home. Their team might not be as fixture proof as once thought with some budget defenders outplaying premium players. Yet, let’s consider it’s been just 2 weeks. 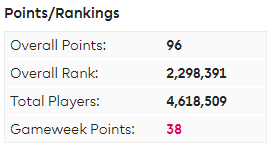 In the middle of the field, the lack of Man City goals continues to frustrate managers. The offensive threat that City possess is impressive, unfortunately a 2-0 victory over BHA and a 1-1 draw against EVE hasn’t produced a feeling of security as it relates to the likes of De Bruyne and Jesus, both of which I have in my starting XI. Some reports of KDB playing deeper, allowing David Silva a more advanced position could shed a negative light on his potential, especially at £10.0. Returns of 3 and 4 (as I captained him in GW2) doesn’t bode well with the likes of Pogba, Mkhitaryan, Eriksen and Alli outplaying KDB at a cheaper price. I have no doubts City will click and when they do, we will all be looking at moving in their high priced talent. GW3 is away to BOU, returns likely!

In a knee jerk reaction to KDB not returning big against Everton I activated my FT and dropped him in favor of Eriksen, which saves me £0.5 and gives me £1.0 ITB. The move was predicated on Eriksen rising £0.1m this week, which as of Tuesday morning, hasn’t occurred. Knee jerk because of City’s strong match up against BOU in GW3. Looks at the statistics, Kane & Co. have some good numbers, which are hard to ignore. Much like last year, I can see doubling (or trebling) on Spurs and now Man United. The addition of Eriksen, now gives me double Spurs, Man United and Man City, while I still have treble defenders from So’ton.

As eluded to in previous pieces, just hours before GW1 I made the decision to change formations from a 5-3-2 to a 5-2-3 due to lack of quality midfielders around £7.0. I felt there were strong attacking options in a third forward, thus I introduced Jesus and Firmino and dropped Lukaku. Two weeks in, we know that was a mistake and I have toiled in that decision for nearly 3 weeks now. Jesus saw just 45 minutes as the Pep merry-go-round is spinning, while Kane…*sigh*…his August woes continue. There is a silver lining through. Most shots in GW2, Kane, 8. Most shots on target in GW2, Kane, 4. For the second week in a row, he clipped the post and left his owners, in a shriveled heap on the floor. Now back to back 1 point returns doesn’t fair well, especially with a £12.5 price tag, but I don’t expect his price to decrease, as his underlying stats are excellent!

So the question becomes, how long do you give Kane? Continued statistics have me continuing to back Kane as 248,000 managers have transferred him out since GW1, conversely 325,000 managers have brought Lukaku in. Looking ahead, Spurs have good fixtures; BUR/eve/SWA/whm/hud/BOU. No reason to to think Kane won’t net 5-7 goals in that span and put his August woes behind him as we move into September.

But what of Lukaku? Now at £11.6 with another price increase in the fold and favorable fixtures through GW7 (LEI/sto/EVE/sou/CRY) and with an astounding 56.7 TSB%, his ownership is a MUST. Yet, here I am looking at GW3 and I still don’t own the big Belgian. Not wanting to “knee jerk” and I holding out for one more week and the international break before activating my first wild card. That’s the plan if asked today. Again, this is another parallel to last season, when I wild carded for GW4 and saw positive short term rewards and a cluster of green arrows.

Based on what has transpired through 2 weeks, I figure I will score 72+ points this week heading into the break and consider my options at that point. “Knee jerk” has been the catchphrase the past few weeks and maybe pulling the trigger quickly on KDB (Monday) in favor of Eriksen will come back to bite me. Hopefully it works in my favor so I can head into the international break on a positive note. Still for he remainder of the week, barring injury I don’t plan on activating the wild card or taking a hit to bring hot, young talent (sounds like a p0rn ad) to my squad. That means Lukaku, Alonso and Trippier must wait another week.