Along with participating in the FPL game, as well as their new draft game, I decided to give the new online fantasy football league called Starting Eleven a change last week after hearing the Brandon and Josh interviewed Thomas Braun on a recent Always Cheating podcast. Gameweek 1 was highly successful, finishing 2nd in the world on Saturday. It appeared I might actually know a little something about fantasy football having having a great Saturday, but faltered on Sunday and didn’t fare as well. Still, the game and interactive experience was great, adding a new dimension to the fantasy game while watching along. 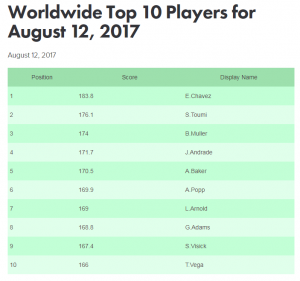 The game is simple and played on a daily basis, as long as there are 2 teams involved. As the manager you select your starting XI for that game day, along with assigning the captaincy. Once the games kickoff, you are allowed 3 transfers during that day. This is what makes Starting Eleven unique. If you are losing and your forward pulls up with an injury, you make a real time substitution!

Last week, I was a bit late to the party, as I made zero transfers on Saturday, due to a prior commitment, which nearly cost me the victory over Brandon at AC, hanging on to victory 167.7 to 165.3. Brandon on the other hand, made a late substitute in order get the upper hand and a chance to change the outcome.

Starting Eleven offers various single day game types; 1 vs 1, Winner Take All (WTA) 50/50 and Private Game. The 1 vs 1 is a head-to-head game against another manager with winner-take-all stakes. The WTA allows you to compete against a group of managers. The highest-scoring manager takes the entire prize pool. The 50/50 is similar to WTA, as it’s played against a group of managers with the top 50% winning prizes. Finally there’s the private game, played as a 1 vs 1 against a friend.

Currently all single day game types offer free contests, but cash prizes for U.S. and U.K. players is coming in Fall, 2017. This will allow managers to not only earn bragging rights, but take home a spot of cash for the managerial prowess. Until that time, games will be played free, learning the game and scoring system.

For more information drop by the Starting Eleven website and see what the app is all about. It’s great fun, while being more interactive than other fantasy games. Feel free to contact me on Twitter (@w6onv) if you would like a 1 vs 1 challenge.