It’s Tuesady as we recover from the opening EPL weekend, which started off with a 7 goal stunner on Friday. But it’s not too early to start looking forward to what direction we want to take when it comes to our squad. Just finished listening to the podcast of Josh and Brandon at Always Cheating. Not sure how I missed out on their commentary and insight (since 2015) the past few years, but I enjoyed their pre-season banter so much, I decided to become a patreon support. Also beat Brandon this week in Starting Eleven on Saturday by 2.4 points.

While GW1 wasn’t all that it was cracked up for me in terms of points, just 58 to start the campaign. I am confident moving forward that I am avoiding the “knee jerk” reaction to major changes in formation or personnel. The injury to Zaha (£7.0), now confirmed out, up to 4 weeks means I must either active one of my substitutes;’ Tom Carroll or Dale Stephens or burn that first FT before Zaha’s value starts decreasing.

To be honest, with all the planning leading up to GW1, I really didn’t play out a 2-midfielder rotation with £1.5m ITB. It was my intention to run Zaha out through GW5 before looking for a replacement. That move was accelerated and I turned my attention towards the highest scoring team in GW1, Man United. It was my intention to have treble coverage from United at the start of the season, but in a flurry of activity, I transferred Lukaku and Pogba, changed formation and opted for KDB, Firmino and Jesus, saving that £1.5m ITB for future use. Something I had NEVER done before, much like playing 5 defenders at the back.

Last night, while standing in the bathroom, I checked FPL Statistics to see which players were topping the list of potential price increases. It came as no surprise to see Lukaku, with his 50.8% TSB, but just ahead of him was teammate, Mkhitaryan (£8.0). Prior to GW1, I was considering him or Pogba to start the season. Neither materialized and I went a different direction, as I felt KDB would score more in the short team based on the team offense and strength of schedule. With a few clicks, I made the change and brought in the Armenian for the injured Zaha. Didn’t want to lose value by holding Zaha, even on the off chance his knee isn’t an issue and he does indeed start GW2 against Liverpool. 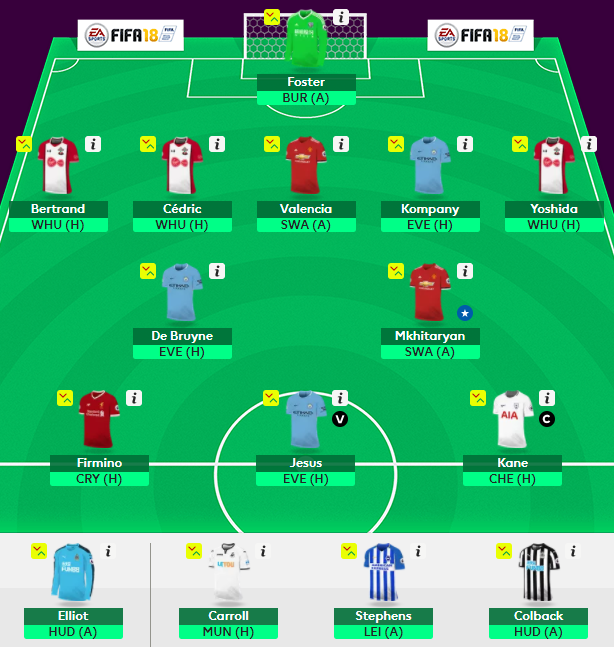 Starting XI for Gameweek 2 is set, with the addition of Mkhitaryan to my squad. Continuing to have faith in the strong So’ton backline, I start with the treble again, looking for more offensive returns from any of my defenders. The midfield contains two maestros, KDB and Mkhitaryan, who could feature prominently this weekend. Up front I run with the same three forwards, opting NOT to bring in Lukaku on a “knee jerk” and a -4 hit. Some questions could surround Firmino after their midweek UCL fixture against Hoffenheim, still I feel he will start for the Reds ahead of the again healthy, Sturridge.

My bench is still a concern. although Carroll is a starting for Swansea but will only be fielded when the Swans feature at home against weak opposition. Stephens, like Carroll, features in GW1 and played all 90 minutes, couldn’t ask for more. Truthfully neither will feature as I will put my budget and faith in the starting XI on the pitch.