In what began as a great game week on Saturday, turned into a bit of a horror show at the conclusion of the Sunday fixtures. Prior to the start of the EPL, like many mangers I spent many hours reading, researching and building my 15-man squad. The culmination of my planning came down to a Friday morning change moving from a 5-3-2 into a 5-2-3. Much of the risk still remained with 5 defenders and a potential lack of attack. With uncertainty surrounding GW1 players and clean sheets being a statistic anomaly, I sat back to watch and enjoy, as the beautiful game had returned.

Unlike the previous 4 season participating in FPL, I felt confident heading into GW1. Over the summer break I remained active in transfers, as well as discussion on players, formations and what we expected to happen in the 2017/18 EPL season. I created countless spreadsheets to help organize my thoughts, build various squads based on formations and put together a transfer plan through GW7. As I said in an earlier post, “If you fail to plan, you plan to fail.” So without further ado, here’s how GW1 played out. 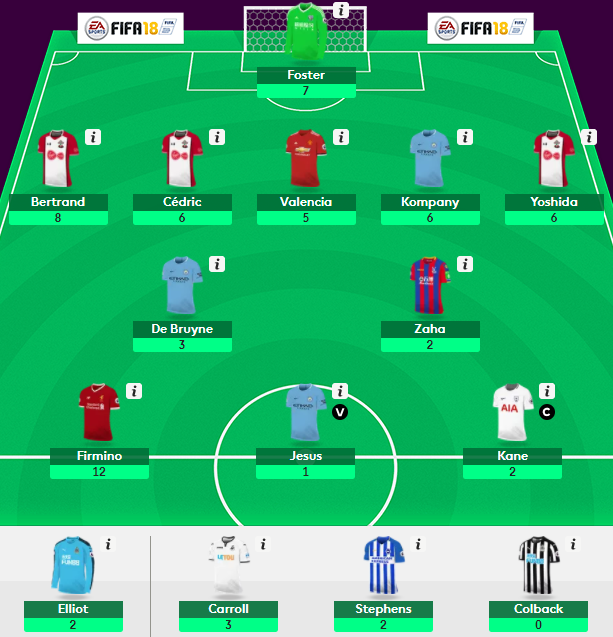 With great anticipation I settled in on Saturday morning in the states to get my fill of football. Unfortunately, NBC Sports has decided to making their Premiership coverage subscription based at $49.99 for a season pass. This means I will be lucky to see two games a day during the EPL season. Really unfortunately to lose the free coverage that we’ve seen since NBC decided to start covering the beautiful game. For me, I refuse to pay NBC for this “extra” coverage. Hopefully they come to their senses for next season, but for some reason I don’t see that happening.

Gameweek 1 began for me approximately 2 hours before ARS v LEI took to the pitch. What was known before kickoff, I was starting with 5 defenders. What I didn’t know, which Chelsea midfielder to start? Willian or Fabregas? Both were v7.0 and starting with the absence of Hazard in the starting Chelsea XI. The opening fixtures for Chelsea didn’t give me a warm and fuzzy feeling; BUR/tot/EVE/lei/ARS in the first 5 weeks. Along with the search for a midfielder, I had Alonso inserted (£7.0) as the anchor in my 5 at the back defense. 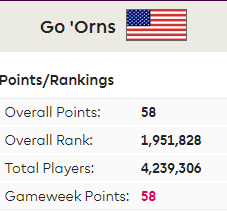 What could be viewed as a hasty, irrational move I transferred Lukaku out in favor of Jesus and Firmino. I had reaffirmed just days before that players above 30% TSB should be owned and considered template players. At the time I moved “Big Rom” his ownership was over 48%! The FFS Scoutcast provided a bit of doubt, the fact that Man United could go up 1-0 against WHM and set up shop defensively at home. Combine that with Jesus, who was phenomenal for City last year, could potentially put up 20+ goals this season, but at £1.0 less than Lukaku. While I didn’t really consider the 5-2-3, but had played around with it, I decided to finalize my team.

Along with shipping out Lukaku, I also said goodbye to Alonso. The front line of Jesus, Kane and Firmino looked great on paper. Defensively, I brought in my third So’ton defender, Cédric. I was living large and backing the Saints to provide a CS against Swansea. City away for new boys Brighton I tripled up though my starting XI. Yet, concern and doubt continued to creep into my head, was this the right move to make, away from Lukaku?

Saturday I could not have asked for a better showing from my defense. Starting Yoshida, Bertrand and Cédric with Kompany and Valencia at £28.0m. Between the pipes, I held steady with Foster as WBA took on the offensive minded Cherries. Planning paid off as I finished Saturday with 5 clean sheets and 3 bonus points (1 from Foster, 2 from Bertrand). Sunday took a minor hit as Jose playing 4 at the back and Valencia, fielded as a RB didn’t get many looks inside the box, but did feature down the right side. He also picked up a yellow card, but still finished the day on 5 points. So defensively I was perfect, 36 points!

Unfortunately problems were mounting as an uneasiness settled upon me. Firmino played outstanding for Liverpool rewarding managers with 12 points, on a goal/assist and 3 bonus points. It appears Firmino will also be on penalties without Milner featuring, scoring his first against Watford. Firmino was a solid addition with the Lukaku move and provided me a sense of reassurance.

The City pairing of KDB and Jesus, failed to really impress, while each got off 4 shots on target, neither returned points. KDB picked up 1 point for the CS against Brighton, but it was Kun Agüero with a goal. Hoenstly, I thought City would roll up 4 or 5 goals, but they saved it late for a 2-0 victory. Zaha and Palace were shell shocked by Huddersfield 3-0, as Palace didn’t get anything going and Zaha didn’t return, while picking up a knee injury that has him questionable for GW2 away to Liverpool.

Saturday saw my finished on 51 points, well on my way to the 60 point average I wanted over the course of the season. This set me up for the Sunday fixtures with Valencia and Kane to showcase my 5-2-3 and add to my total. Maybe I should have paid more attention to the fact that Kane remains goalless in August in the EPL, but the decision to include him to start the season was partially based on how strongly he finished last season. Spurs looked sharp, Kane had chances in the box; saved, post, offside denied him of three excellent chances. I also gave Kane the armband, so his 1 point doubled.

I spoke about the Captain’s Armband back in March and how I was “sorely disappointed” and “in 13 out of 27 weeks (48.1%) I owned and started the player who was recommend in website captain polls.” To start this season, the armband was on Lukaku before I transferred him, handing the captaincy to Kane, who was listed in many polls as the second choice option. If I would have held steady and not moved Lukaku I would have finished 25 point higher (Lukaku 26, Alonso 0, Fabregas -1).

While I was hoping to hold my GW2 transfer, the injury to Zaha might force my hand. With £1.5m ITB, I have options to replace Zaha, if indications are he’s not going to start against Liverpool. However I continue to keep an eye on Lukaku. That transfer finger is getting itchy and current TSB% of 50.5% is continuing to climb with swa/LEI/sto in the next 3 games. Yet I feel I can justify Jesus for £1.0m less with strong fixtures through GW10, that do include LIV/che in GW4 and GW7 respectively, teams that gave up 3 goals a piece in GW1. Could Kane take a one week pass in favor of Lukaku agsinst SWA?

Overall it was a terrible weekend on just 50 points, I am sitting at 1.9m in the overall standings and the 15 leagues I am in aren’t even worth talking about at this point. It will be a week filled with discussion and decisions before the start of GW2. With that sole FT burning a hole in my pocket the injury to Zaha could force a move. FPL is back!