Just a week after initial prices were released for FPL, many managers are preparing their squads and dropping countless ‘RMT’ threads on different websites I visit. To date, I have yet to have anyone rate my team because with 3 weeks to go, rest assured my 15-player squad will change before the GW1 deadline. However I am still very supportive of a 5-3-2, based on the information from Firetog, titled In Search Of The Best Fantasy Football Formation. I wrote about him making the case to start 5-3-2, but more important than the formation, “success is more dependent on player selection and timing, transferring in players as they are about to hit form, getting lucky with captaincy and the making good bench rotation decisions.”

While my starting XI isn’t set in stone, I feel I have a good defensive line to build around. While not the traditional 3-4-3 or 3-5-2, I center my squad around 2 premium defenders and a cast of medium priced defenders. Spearheading my attack, two premium priced forwards. It will be the midfield that ends up rotating with four players, each priced at £6.0, supporting a single premium midfielder. Risky? Sure, but the reward could be worth it. 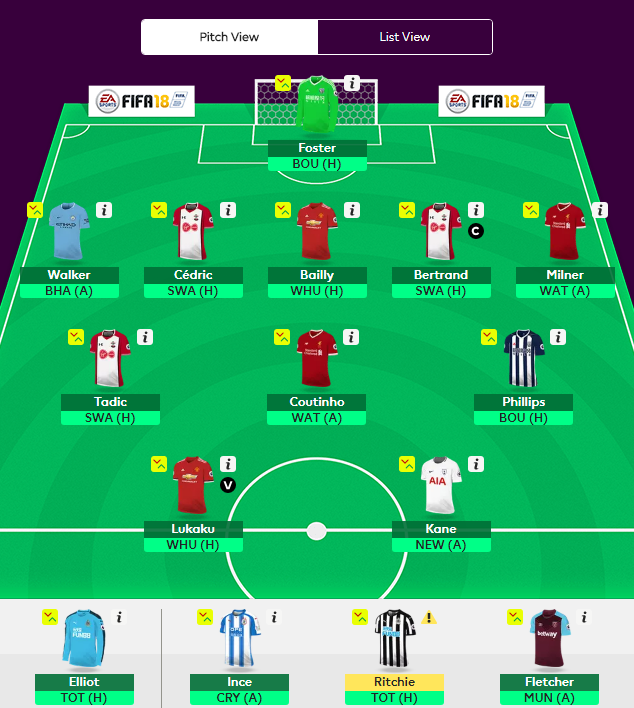 Based on the £100.0 budget, here’s my starting XI. Currently, Milner and Walker about both question marks, as the transfer window is still open, both Liverpool and City are looking to add depth to the defensive positions which could see both of these options changed.

The key to success using this formation (outside of luck), are the available players rotating in the midfield. I have tentatively set up the first 16 weeks of the EPL based on strength of schedule (SoS), with an emphasis on HOME games and the fact each midfielder is priced at £6.0. What I haven’t taken into account at this point, team value (TV). Through GW7, I continue to use players priced at £6.0. We know prices will rise and fall depending on TSB% and the form players start the season with.

Currently I plan on activating my WC after GW7 to coincide with the second international break. With any luck I will hope to have a TV of £102.0m in order to allow for further player options. Barring injury or poor form, I don’t plan on move Lukaku or Kane, but there are many options available when you draft two of the highest priced forwards in the FPL game.

The midfield rotation depends on the success of Dusan Tadic (£6.5), who is featured predominately over the first 11 gameweeks. Underlying statistics identify him as an undervalued player, but his success is contingent on So’ton starting an in form forward; Austing, Gabbiadini or Long. This 9 week period featured a Chelsea midfielder in 7 of the 9 weeks. Priced at £7.0, Willian could be slotted into this rotation, but expectations are Eden Hazard will be back to his starting role, which calls into question just how much pitch Willian sees.

Junior Stanislas (£6.0) is another budget option who’s SoS improves starting GW8. Xherdan Shaqiri (£6.0) is another player who could end up seeing time in the midfield. Dynamic and on set pieces Stoke City’s schedule turns more favorable in GW7. Based on last season, I hope my TV is pushing £102.5m.

Even the above graphic isn’t complete, no reason to plan past the first gameweeks, as there are just too many variable that could change. Player form, value and injury are just a few factors that could derail this plan or having me looking elsewhere for starting talent.

As mentioned yesterday, having premium defenders and forwards allow for excellent options. My rotating midfielder could be reduce to three, if I decide to start a premium midfielder and a £7.0 option, such as Willian, Wilfried Zaha or Manuel Lanzini to start the season. With Harry Kane known to start August slow, a quick £1.0 could be saved start Sergio Agüero and £2.0 if I go with Alexandre Lacazette.

With 3 weeks to go before the start of the 2017/18 EPL season, jury is still out if I have the cajones to actually run with this idea to start the season. Based on the popularity of wing backs and premium defenders matching or outscoring medium priced midfielders, the potential of this formation and rotation is exciting. Be curious to hear your thoughts and comments.