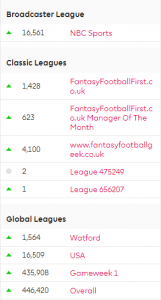 League play is finished, as I was not able to catch a second of any GW38 action due to problems at work that required my full attention. In hindsight, that might have been a blessing, as it seems my squad always scored better when I wasn’t watching. First let me say it’s been an enjoyable year, even if my squad didn’t meet the expectations I set forth at the beginning of the season. Being just my 4th season of play, I have learned some more valuable lessons, picked up some new tips and strategies I can apply to next season. However I did notice my reliance more on fantasy sites this year than in the previous years. That comes as a mixed bag, occasionally having me think through a certain transfer, changing captains or shifting my strategy. Without actual evidence to support my total score, I would save more often than not, accessing fantasy sites work to my advantage.

For GW38 it one of the best weeks I have put together all season behind #10, Harry Kane. Another 3 goals this weekend against Hull, making 7 in the last 2 weeks. He also donned the captain’s armband finishing the week on 34 points! I nearly changed the captain pick to Jesus while driving into work, but shut down the fantasy app so I wouldn’t second guess my starters. Speaking of Jesus, he finished with 11 points, a goal and assist with 2 BPS. While I had thoughts of moving Costa, I stuck with him, finishing with just 4 points. 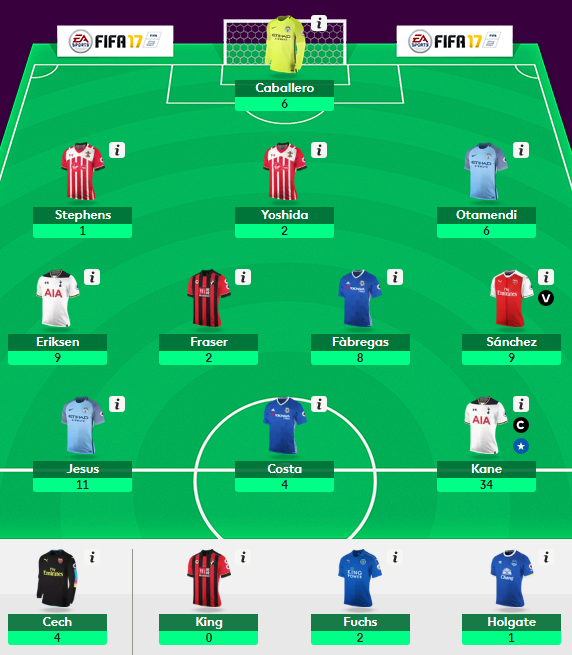 The midfield saw two changes, of which neither benefited me for GW38. I had transferred Alli and Hazard (17 points) out for Fabergas and Sanchez (15 points), for a net -2 points on a -4 point hit. We saw King not play due to illness, which left just Eriksen as my only remaining midfielder from previous weeks, finishing on 2 assists, 1 BPS for 9 points.

Defensively, it was mixed. Man City FINALLY came through as Calballero and Otamendi each picked up 6 points with a CS. I stuck with Yoshida and Stephen of So’ton against Stoke, but they combined for just 3 points in a 1-0 loss. That cost me some points as I expected So’ton to float past Stoke with a CS.

If I wasn’t so dead  set on grabbing Sanchez, more so because of his 3 doubles in the last 4 weeks, I probably could have saved a transfer, stuck with 4 starting midfielders and picked up Vardy or Batshuayi. Aguero was never in my plans. Still, I am pleased with the overall performance and score for GW38. As for the season, it could have been stronger but I finished the year strong, which gives me hope for next season. 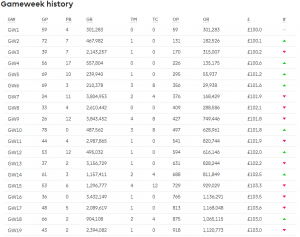 The Go’Orns entered their 4th year playing in Fantasy Premier League, on the success of the 2015/16 season, which I score 2170 total points and finished in the top 75k, I had high hopes to improve on both total points and overall ranking. The season started great with 4 green arrows in the first 5 weeks and a overall rank of 29,038 at the end of GW6. The season had hit a high note very early and I thought I had mastered this season and would continue riding the wave of success. Little did I know the season was just starting and I was about to take some serious lumps.

Over the next 20 weeks I would see just 5 green arrows, dropping from 29k down to 1.6m! The subsequent weeks saw just 83 points between GW7 through GW9, from that point on the season was over. Of the 5 green arrows, each was followed by a red arrow as I continued to slip further and further down the overall ranking. GW15 through GW17 was another slide, 3 red arrows with a s game slide in GW19 and GW20. 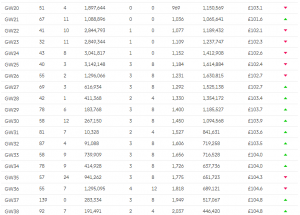 While I never really contemplated holding my second WC until the DGWs were announced, I needed a change and I activated the WC fo GW21. Like that during GW4, the WC brought me success and a green arrow and 67 points. It appeared the turn around was beginning, yet it was short lived. Rock bottom was hit between GW22 and GW26, my worst run of the season. Scores of 41, 32, 43, 40 and 55 didn’t help the  bottom line and I dropped 500k sat at 1.6m.

Starting GW25 I changed my strategy, while it wasn’t the best idea, I started averaging -8 hit per week through GW38. While GW25 and GW26 weren’t positive returns, GW27 saw the first of 8 green arrows and 10 out of the last 12 weeks. I missed out on GW35 (week avg 46 pts) and GW36 (week avg 46 pts) taking hits of -8 and -12 points. This was the sort of run I needed earlier in the season, if I wanted to salvage the season, but it never did materialize. I guess it was better late, than never. I took some chances during this period and benefited from the excessive hits I was taking in, with just 1 week (GW28) receiving a -1 net result as the players I transferred in scored just 3 points (vs a -4 point hit). It was the triple threat of Spurs that spawned my revival, starting in GW21 when I introduced a new dynamic to my squad.

During this wild card period I transferred Rose, Eriksen and Alli in. Unfortunately Rose lasted just 2 games before he succumbed to a season ending injury. It wouldnt’ be until GW33 that I would finally pick up Kane (for the second time) with returns every week but GW36, Lest we not forget his 7 goals in the final 2 weeks of the season to win the Golden Boot. For me, I won one of two mini leagues, as Kane was a differential. Eriksen played every game from GW21 averaging 6.1 points a game and picked up 15 bonus points. Alli’s first go around was short lived from GW21 through GW24 returning 18 points, bringing in Sigurdsson for him. He returned in GW29 scoring 59 points for me through GW37. While I planned on keeping him, I dropped him in favor of Sanchez for the final week of the season. Together Spurs players scored 296 points in 43 appearances. This group topped my squad for points scored. 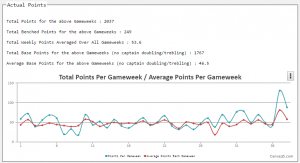 Three players who were featured  in 14 game weeks over the course of the season finished in the top spots for points scored on an individual basis. Not surprisingly it was Sanchez leading all scorers with 123 points (8.8/gm when played). Ibrahimovic and Lukaku rounded out the top 3 spots with 117 (8.4/gm when played) and 115 (8.2gm when played) points respectively. If it weren’t for his ineffectiveness and injury, my “man crush” probably would have score more points, but I could not keep a 12.0m player when he wasn’t scoring. Aguero scored 103 points in just 8 games, a whopping 12.9 pts/gm when played! By GW10 my love affair with him was over and I had moved on to players like Lukaku, Kane, Ibrahimovic and Vardy to fill the void.

Defensively the Go ‘Orns were a mess. I used 29 different defenders and 6 different goalkeepers, with Eldin Jakupovic featuring on my squad for 37 weeks, starting just 6 times. Foster was featured 14 times, but I stuck with him too long at the start of the season when WBA hit some bumps and CS were difficult to come by. He averaged just 3.4 PPG in his starts. Heaton was the most effective, but I was late to the bandwagon, playing in just 9 games, but had 5 CS, 8 bonus points and a 5.2 PPG. 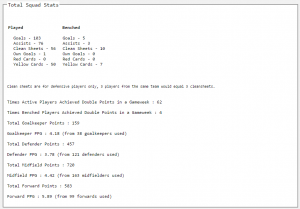 Initially I had planned on Valencia being my featured defender for the season, but by GW15 I had moved him because of just 35 points in 14 game weeks (12 as a starter), just 3 CS and no offensive returns. Yoshida, the So’ton budget buy defender featured in 10 games return 52 points (5.2/gm when played), was a nice diamond in the rough during the later part of the season. Coleman appeared to have replaced Baines as the main offensive threat for Everton, brought in for GW23 he lasted just 7 weeks scoring 41 points, an average of  5.9 points! Unfortunately injury cut his season short and left managers looking for a replacement. Above all other positions, I struggled with consistency all season long. I missed Alonso because of the news of Ake coming back to Chelsea, which had me pick up Azpilicueta instead. We know how well Alonso performed starting at that point.

For next year I will need to plan a better strategy than what I have done the first 4 years in FPL. No longer will can I rely on taking mutliple hits each week in order to improve my team. After my last write up, Excessive Hits, I realize that while I had a run of good weeks in which a -4, -8 or even a -12 benefited my sqaud with double digit returns, those were few and far between (WC asides). This means to start out of the box with a solid starting XI that performs when the whistle blows. We are usually left searching for or jumping on a hot player after just a single week. I know I did almost all year. Can’t truly say there is one right way to play this game. 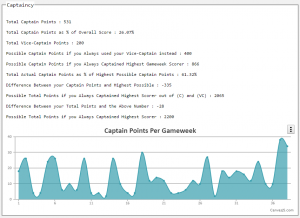 This year I started forward heavy with Ibrahimovic and Aguero, passing on the high priced midfielders like Sanchez and Hazard to start the season. It turned into a love hate relationship with Sanchez, always a step behind his good weeks and poor returns with the captain’s armband. I did favor the 3-4-3 formation 22 times this season, using the 3-5-2 just 8 times. I recall writing an article citing this formation after activating my second WC, but it didn’t last. However, the 4-4-2 used 5 times over the season yielded a 56.2 PPG average, higher than the 3-4-3 at 54.9 or the 3-5-2 at 54.8.

Captain selection is an interesting statistic as Sanchez was the tagged 8 times for 100 points (12.5 pts). Kane and Aguero were each captained 5 times, averaging 15.6 points and 20.8 points respectively. Aguero was the only captain with 5 or more games that gained an average over 20 points. Some were very timely captains, such as  Vardy in GW30/GW31, Bailly in GW34, Jesus in GW37 and Kane in GW38. For as many good selection, there were times that a punt didn’t pay off, Defoe in GW4 for 4 points, Walcott for 6 points, GW9 and Coutinho in GW13 for 4 points.

Overall one thing remained constant, the fun and enjoyment of participating. If that is lost, then there is no reason to continue playing. While my initial goal had to be reevaluated (score more than 2170 points), I did meet the mid-season change of scoring at least 2000 points thanks to the final 2 weeks of the EPL season. On paper scoring 66 points a week seems so simple, each player would average just 6 points a game! Even 60 points a week is just a 5.45 PPG average. Over the course of 38 weeks not taking into account captaincy selections of players scoring more points, averaging 66 points a week gives you a final score of 2508! That puts you in contention to end up in the top echelon of the best in the world. Thanks to everyone for a wonderful season and see you next season!