Looking at my score 42 points, I shouldn’t be pleased with another sub par performance. On a weekend in which there were just 4 games played and running out just 10 starters, the weekend average came in at just 19 points. However, I took a -4 point hit to bring in Coutinho for Sterling, in hopes of his strong underlying stats pulling L’pool through the home match against Burnley. It was also a weekend I took a chance and strapped Coutinho with the captain’s armband. Actually my wife made the decision for me. Saturday after the matches I exclaimed, “So glad I didn’t captain Llorente, just one point.” Yet that statement came back to bite me in the ass when Coutinho played just 59 minutes and scored me just 1 point. Lukaku was never really in the running for me, to wear the armband, but in hindsight was the best option I had. On the back of GW27 and GW28 I have strung 2 green arrows together for the first time since GW5 and GW6! It’s been THAT long!

Starting up front I decided to run out Lukaku and the newly acquired Llorente, fresh off a brace last weekend. It should have been a good match up for Swansea, but Llorente fell to injury at 44 minutes and was substituted. Lukaku however returned has third goal in 3 weeks, along with an assist and 3 BPS as he totaled 12 points. Captained by 776k managers, I noticed this his score made up the bulk of their weekend final scores. With Gabbiadini transferred in on GW26, he’s played just a single game out of the last 3 weeks, but I’ve been high on him since his the move to So’ton. Expecting good returns after the Spurs match in GW29, as well as upcoming DGWs. 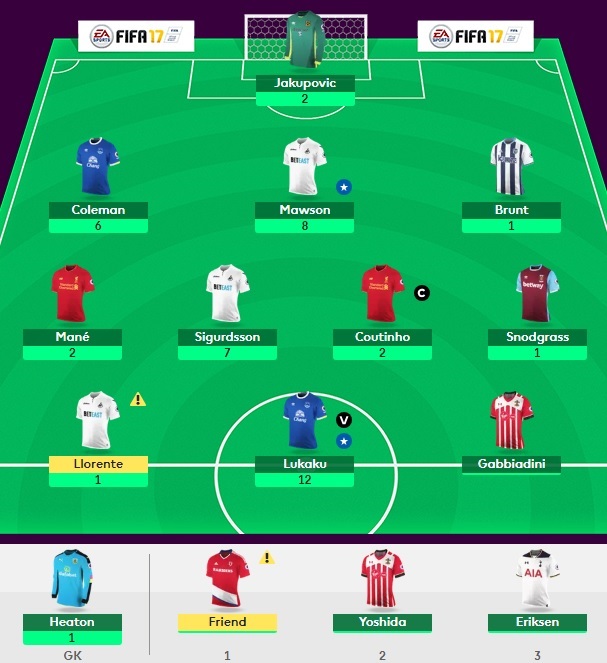 Speaking of Spurs, without an EPL match today, Harry Kane left after 32 minutes due to an ankle injury that could potentially end his season. Devastating news for Spurs fans, as well as managers, like myself who picked in him last week or were going to bring him in for GW29. That move, now on hold as we wait the outcome of the medical evaluation, but crutches and a boot were not a good sign. That opens up the door for another option up front. Do you bring Costa back? Two goals in his last 2 games. Defoe? Three good fixtures the next 3 weeks, but no returns since GW24. Deeney is always an option, at 6.8m, he’s found his form with 5 goals out of 6 games. Aguero? Giroud? Vardy? Are the Foxes for real? The news on Kane might mean it’s time to move back to a 3-5-2 with very strong midfield options.

Josh King was an option when I looked at my transfers before GW28. A favorable match up against West Ham, who has leaked goals all season. It appeared I made the right decision as King pushed his penalty shot wide right to start the game. I gave myself a small pat on the back for going with Coutinho instead in a home match against Burnley. Well, I found myself shaking my head in the aftermath, as King dropped a hat trick for 18 points and SHOULD of had 5 goals (when coupled with the Afobe PK that was saved). Even saw a website that had him as the top captain pick! Sticking with L’pool seems to be feast or famine, as I doubled up with Mane and Coutinho (captained) and got stuck with a combined 4 points! Didn’t think it could get much worse on the back of not captaining Llorente and the game King had. Snodgrass might be falling out of favor at West Ham as Feghouli and Antonio started. I am considering transferring him this week in favor of King, who could be used in spot starts. Snodgrass did come in at 60 minutes for a single point. 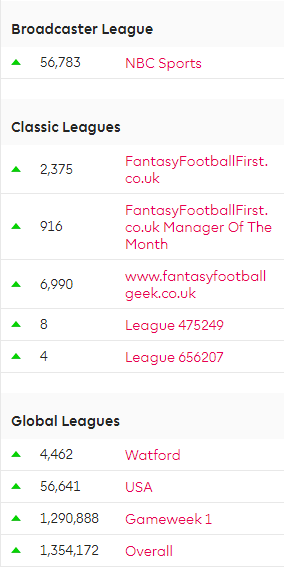 Sigurdsson was also on the short list to be captained, but felt there were better options. Even though Clement’s team took a step back this weekend in a 2-1 loss, Sigurdsson continue to produce results. It was his 4th straight game with an assist (7th straight return points),  3 goals and 6 assists in his last 9 games. Many had tagged Mane to have a big game coming off his game vs Arsenal, but like Coutinho, he disappointed mangers and didn’t return. However, after Man City in GW29, L’pool has a run of good matches to the end, starting with the Merseyside Derby in GW30.

Eriksen, in FA Cup action this week had 3 assists and a goal against Millwall. I am now considering doubling up with Alli again, which I did earlier in the year when Kane was rather ineffective up top. Not sure Janssen will be a direct replacement for Kane…could be Son. We will have to wait and see.

Defensively I am pleased with Coleman and Mawson, as both players returned points this weekend. Coleman provided an assist and Mawson a goal and a bonus point. A total of 14 points, but all is not as it appears defensively. Brunt needs to be moved, Friend is still injured and So’ton hasn’t kept a CS since GW11, which means Yoshida needs to go, even though he is my budget defender at 4.2m. Still considering doubling up on Everton defenders with Funes Mori but that move is still 3 weeks away. Walker at 6.4 would my highest price defender, but the possibility of no Kane up front, might damper that move. Chelsea was a “sure thing” but with no CS in the last 5 games they might see relief with Stoke and Palace in the next 2 weeks. Finally, Valencia flashes on my radar again, first time since I sold him for GW9. He’s returned 3 assists in his last 6 weeks coupled with 3 CS. Some questions need to be answered up front for United with Zlatan now suspended. But they do have 4 good matches coming up; MID (A), WBA (H), EVE (H) and SUN (A).

Hopefully these two green arrows are the start of the “good run” I have been chasing all season. Looking ahead, it’s time to start thinking about the DGWs, should be some productive players featured in GW34 (maybe GW37) that could push managers to finally activate that second WC and break out the triple captain chip. For me, moves will cost me more points as I look to make moves in order to my ascent up the global ranking. It hurts to take -4 and -8 point hits, but I’m always hopefully I can break even on these weekly moves. It’s been 11 moves the last 4 weeks costing me 24 points. Unfortunately, I have given up chasing the 75k finish I had last year. I would need a Leicester City miracle to break the top 100k. As long as I can finish strong, I will be pleased.