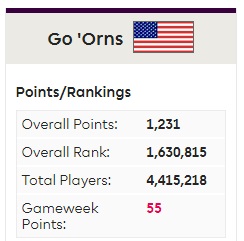 I’ve started waving the white flag on the 2016-2017 EPL season at the conclusion of GW25. It appears that no matter what decision is made ends up costing me points and seeing my global ranking drop. After this week I found myself sitting at 1.6m with a weekly score of 55 points, 10 points over the average of 45 points. Not the first week I have found myself in this position, as the season continues to frustrate. Currently I am on a run of five red arrows that have seen my drop nearly 500k spots. Oddly enough, I’ve had just a single green in the last 8 week and it coincided with activating my WC in GW21.

What does a fantasy manager do at this point? It’s a very fine line, as the Fantasy Football Geek wrote this past week, “So during the season I’ve been taking a tale of defences, captains and 1 or 2 player differences making a huge difference.  Here is a great example of the latter.  6 of the 11 starters are the same, same captain and only 3 points difference in defence.  However 29 points difference in 2 players.  Kane 20 pts vs Benteke 2 pts and Eriksen 11 points vs Phillips 0 pts.  Now this is a bit of an exceptional case as the low scoring team has Ibra on the bench so the value comparison of the players isn’t fair but still.  2 players 29 points difference.” This is a great example, one in which I end up on the wrong end of the bench wondering where I went wrong.

Based on FFG’s ownership of players over 50% by top FPL managers he follows, I have 6 out of the 7 players; Lukaku, Sigurdsson, Phillips, Mane, Coleman, Brunt and Alonso. The only difference, I selected Eriksen (40% ownership) over Alli (80% ownership). While I am making some correct decisions, it’s the role of captain and the differential players that have cost me dearly over the course of 25 weeks. Just last week in Blanks & DGW I mentioned the turning point in the season was GW10 when I transferred out Sanchez. Oddly enough, GW10 was my last good and highest scoring week of 78 points. 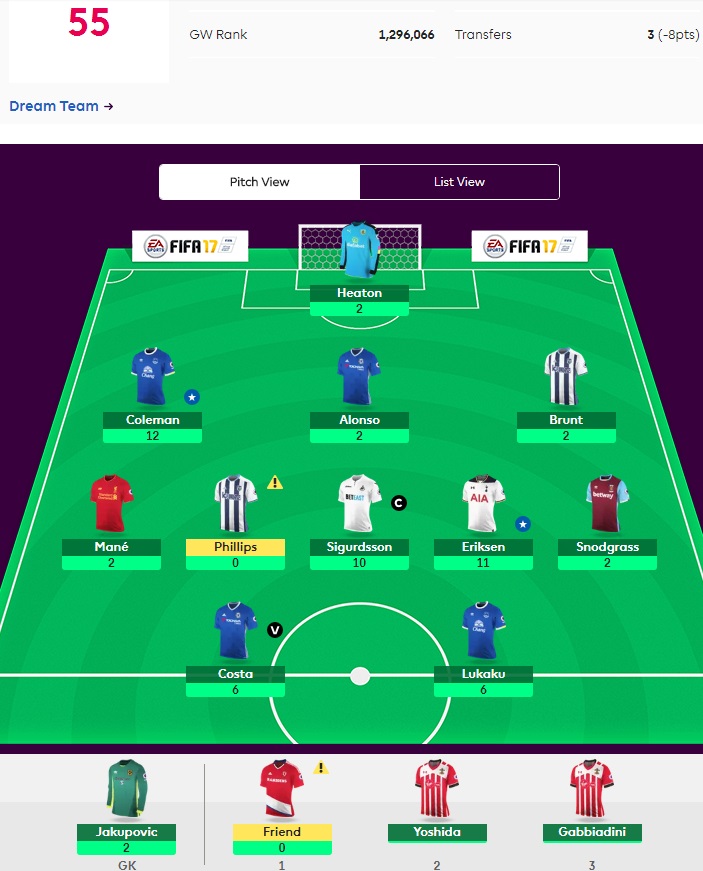 I entered GW26 with a -8, making 2 transfers after muffing up my FT by selecting Gabbiadini with a blank for the week. Mane and Snodgrass were the other players to help cover the next 3 weeks due to blanks. Both players unimpressive got me a total of 4 points. All the talk about Mane being in form after a brace in GW25 and he comes out shooting blanks. Tired of relying on Liverpool midfielders, I still by an earlier comment, their midfield play has been very inconsistent all year long! I am already planning his transfer away in GW29 for Sanchez.

Phillips has been injured and I was hoping he might see the pitch, but ended up taking a zero. With very tough fixtures upcoming, he will be transferred out this week in favor of a midfielder to cover the next 2 weeks and to be used as a fifth starter, due to the addition of Gabbiadini and going back to a 3-4-3 formation. Mistakenly I kept the captain’s armband on Sigurdsson versus Chelsea, but he came through with an assist and 10 points. Eriksen had 2 assist, nearly a third and scored 11 points.

Up front it was difficult to watch Harry Kane net a hat trick and add an assist, while Costa and Lukaku each netted one goal, a total of 12 points. With Sigurdsson captained, I lost out on just 2 points. I am keeping hope alive that Gabbiadini will be that keystone player I have been yearning for in order to turn my season around and string together some green arrows, something I haven’t seen since GW4-GW6.

Defensively I am pleased with Coleman, 12 points on an assist and clean sheet. Alonso and Chelsea have been close the last 4 game weeks, giving up just a single goal each week, like Coleman, he’s a cornerstone on my defense. Brunt is short-lived, returning just 2 points this week, he will be sacrificed by GW29, like Phillips, he’s got a nasty run of schedules after GW29. Yoshida is my current 5th defender, had no game in GW26 and on a blank for GW28. Friend has been carrying a knock since GW23 and has not seen any playing time. At 4.3m I had hoped to have him as an option but it appears he will be moved for Alfie Mawson shortly.

Heaton and Jakupovic man the goal and I have run with Heaton since I picked him up with my WC in GW21. He’s played well against some of the bigger clubs, as managers rely on the save points as a budget goalkeeper. However with Liverpool and Spurs in GW28 and GW30, Jakupovic could see his first start home to Swansea and West Ham. The new look Tigers have played much better recently under Marco Silva and Jakupovic has been a key player for them.

Again, we point at the differentials; Yoshida, Friend, Gabbiadini, Snodgrass, Jakupovic and Eriksen. It’s been a challenging year in which the incorrect decision has usually come at a bit cost.