Starting the week ranked in 55k in the global league with a team value of 101.6m brought a smile to me face, then I faced the reality of the situation knowing I was going into GW6 without Aguero. I mismanaged my transfer funds and used 2 FTs I was saving to bring Aguero back leading up to this week. While my hands weren’t tied, it was going to cost me. Cost me  -8 points to accomplish the moves necessary to bring back the cornerstone of my squad. All week, I spent time reading, writing and analyzing the data on different fantasy football sites, which made the decision just more muddled. If GW5 taught me anything this early in the season was to let the team ride, lock up a FT in anticipation of future moves. It wasn’t until I read a reply from James R on Fantasy Football Geek, he confirmed what I already knew, “You need to get Aguero back, he’s going to rack up the goals.” I knew this and with a few clicks of the mouse, made it happen. 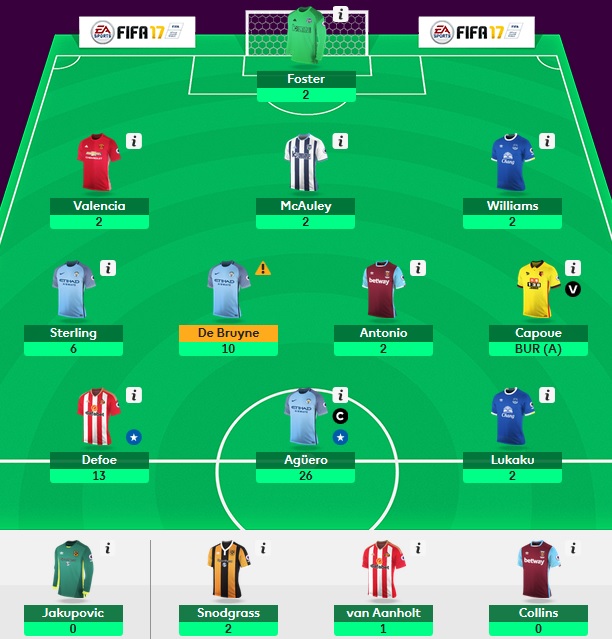 James R offered up a few transfer scenarios, but neither worked, leaving me with a deficit of more than 2.0m. I didn’t want to lose City coverage, with Sterling and De Bruyne already on my roster, Aguero would make it three, feast or famine in terms of points. I decided to move Ibrahimovic and Cazorla in favor of Aguero and Snodgrass, which put 1.0m in the back when all was said and done. At 59% TSB (teams selected by) it was a risky move but with Man U not playing well it was a gamble I was willing to make. At some point in the near future I will bring Zlatan back, probably for Lukaku. It felt right having Aguero back in my starting XI but the cost was -8 points to my weekly total.

Unable to watch the early Saturday matches I checked the scores and wasn’t too pleased with what I was seeing. Although I cracked a smile when saw 4 games by Man U, none of which scored by Zlatan. It wasn’t until all games were final that I logged into Premier League and saw my overall score for the week of 65 points! I was thrilled to see my total and examine the break down, but one look and the -8 point to bring Aguero in had paid off. Being captained, knocking in 2 goals and receiving 3 bonus points resulted in 26 points, tops on my squad. Not to be outdone, DeBruyne and Sterling chipped in with 10 and 6 respectively for a grand total of 42 for City’s 3-1 thrashing of Swansea.

What’s happened to West Ham? They’ve conceded 14 goals in 4 matches, but they were still scoring, 2 against Watford and 2 against WBA, but nothing against Southampton. Antonio still looked dynamic on the outside, even when dropped to right defender, he was finding himself in the attacking third of the field and still appeared to an asset. This is his first blank since GW1, which I am willing to let slide as the Hammers face ‘Boro (H), Palace (A) and Sunderland (H) in the next 3 games. The potential to come away with 4 goals is still there for Antonio and with Payet orchestrating the midfield, I still think Antonio is a strong play. His 2 points today will hopefully be overlooked.

Being talked up as one of the strongest defensive teams in the league, now with Lukaku in form, I dropped Costa in favor of the big Belgian a few weeks back. While it looked great last weekend with a goal and assist, his form dipped this week resulting in just 2 points. His consistency is terrible, more so than any other big name forward in the EPL in recent years. Everton’s 1-0 lost to Bournemouth just calls into question the inclusion of Lukaku at 9.3m. Thankfully is was Defoe to the rescue bagging 2 goals and 3 bonus points for the Black Cats as they lost 3-2 vs Palace. Now on 36 points he draws even with Zlatan and trails Aguero by a single marker. Depending on the Monday match with Watford visiting Burnley, Deeney is on a very short list to replace Lukaku in the next few weeks. 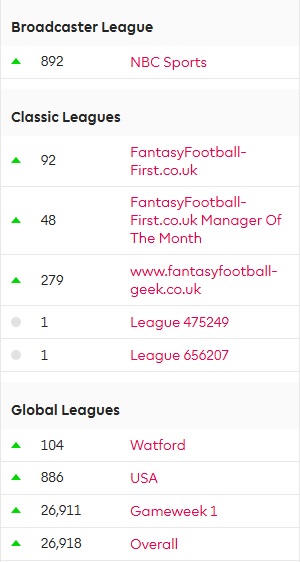 While I haven’t given up defensively, I am not going to continue chasing clean sheets. I plan on running with Foster, Valencia, McAuley and Williams as my starters, while Collins and Van Aanholt come off the bench. Yet with PVA (5.0), I should probably downgrade and save 0.5 to be used elsewhere on the pitch. The GW6 starters totaled just 8 points, another disappointing returning with each team giving up just a single marker. So close…yet so far, but with only 3 clean sheets in GW6 (to date); Arsenal, Southamption and Bournemouth, I am not the only manager looking to turn things around defensively.

With Monday’s Burley v Watford still to come, I am already looking forward to GW7. Unfortunately De Bruyne sustained a muscle injury that reported will keep him out 4 weeks. Price at 10.7m, with 3.4 ITB bringing in Sanchez would be a logic move. Arsenal face Burnley (A), Swansea (H), ‘Boro (H) and Sunderland (A). Some great looking match up for the Gunners and Sanchez! Only problem I have for GW7, I used my FT to bring in Rashford, in anticipation of a price increase at the cost of Ibrahimovic, this the 3.4 ITB at the time of this writing. Amazing what moving Zlatan does to potentially improving other positions. While no determination will be made on KDB until Tuesday, I am ready to pay the -4 hit and get Sanchez.

At the completion of Sunday I have 354 points, averaging 59 points/week, which is just 1 point off my weekly goal for the season! With just 2 points today from Antonio for a weekly total of 67points, I jumped up to 26k in the global league and maintain the top spot in both my classic leagues. Team value has increased to 101.7.