This post will fall mainly on deaf ears since football (aka soccer) is not taken seriously in the United States. Sure, we have the MSL, USL and NASL but none of them compare to the game that’s played abroad, but I am not here to drag my soapbox out about the inferior play and leagues in America. This is about the fantasy aspect of football, which is big business, especially in the Barclay’s Premier League. Just like the NFL and countless leagues that pop up when the season rolls around, football in England takes center stage for a 38 week season.

Outside of hockey and basketball I have played fantasy sports since 1983, when I started my own fantasy football (NFL) league with 5 friends. So while my expertise flourished with stats, players and strategy, interest in the NFL has waned the past 10 years and while I still participate I do out of friendship for the guys I play with. It’s the EPL that has taken center stage for me, played on a very large scale with 3.7 million players taking part in the Fantasy Premier League. This is just the third season I have participated, but after 36 weeks I will post my best score to date based on a very hard to predict EPL season.

Compared to my past NFL expertise, I am a 3 year “newbie” to the fantasy world, sometimes learning the ropes, “the hard way.” Each year is a new experience, a new piece of the puzzle to implement in hopes or fielding the best 11 players on the pitch. Yet 2015-2016 has already seen the league turned upside down with Leicester City, a 5000-1 long shot winning the league. Past performances of top players have been questionable at best sometimes, but subscribing to “form over fixture” seems to hold true more often than not. In the past it was “the law of fantasy football averages” as it related to the NFL (read The Ogletree Factor). “This is a law that dictates there are only so many yards and TD’s to go around and mediocre guys who have really good weeks will have to have really bad weeks later on to average their stats out. It also works in reverse for good and/or great players. Those who have really bad weeks will have to have some really good ones to again, average it out by seasons end.”

Form over fixture is important, as hot players can quickly go cold, so being able to predict “who” will move is based purely on speculation. When it goes in your favor, you are genius! Sometimes a few weeks can make your break you entire fantasy season. For me, my season broke in week 9, on the heels of a 109 point week. thanks in part to Kun Aguero dropping a 5 goal performance on Newcastle which netted me 50 points! These two weeks were separated by the international break, which saw an injury to Aguero. I took a -2 hit point restructured my team transferring Aguero out and bringing in Graziano Pellè and Kevin De Bruyne, a move that accounted for just 4 points in week 9 and started a run of red arrows the next 5 out of 6 weeks.

At the end of week 8 I was ranked 65k, my highest ever ranking. After week 14 I sat at 583k, a drop of some 520k positions. I thought I turned the corner after consecutive green arrows in weeks 15 and 16 (66 & 69 points), but 72 points in week 17 saw another down arrow. Continuing to read the fantasy sites, take advice and participate in weekly polls, it was tough to see much change. The dynamics of my team continued to shift, I did however maintain a 3-5-2 formation, but hurt myself by playing my chips too early in the season. It makes great sense to hold these gems (all out attack, triple captain and bench booster) until the DGWs or double game weeks begain.

Entering week 34, the first DGW I was ranked 161k, coming off a solid 76 point performance, 20 points above the average. By this time, Aguero was back on the front line and Alexis Sanchez was transferred in. When the DGW ended I was score 139 (-4 points for 2 transfers), 60 points above the average. You can play the “what if…” game every week in fantasy sports. “What if I would have held my triple captain chip?” “What if I played my bench boost?” You can drive yourself to a white, padded room thinking about the “what if…” scenarios. I saw a green arrow and my highest rank, now 107k since week 9.

Since week 1 the team has changed considerable. In this game getting in on “the template” is imperative. The template are those players that many of the top 10k players own. What make one team flourish and the other flounder are those “differentials” you have on  your team, any given week that score to make a difference in finishing with a red, down arrow or a green, up arrow. Week 3 saw me burn my first wildcard (WC) in order to bring my team close to those players on the template but passed on Leicester City’s, Jamie Vardy for weeks on end during his 11-goal scoring streak. The use of that WC helped me gain 520k spots in just 4 weeks.

Now we stand on the edge of week 37, another DGW. Many owners have held onto some of their chips or even a WC and are preparing to make that final push to close out this strange year in the EPL. Entering this week with 2041 points, I have matched my best point total from 2013/2014 but 300 points off the overall leader. That equates to less than a 9 point/week difference. That’s a defender gaining a shutout or a midfielder being awarded 3 bonus point. Even easier points, holding the chips until the DGWs. Regardless of how the year ends up, I will end the year on a positive note, even if I happen to go tits up with two red arrows. 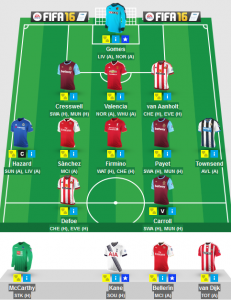 As for this week I am hoping for BIG things, taking a -20 point hit to field a team of 10 starters all playing in the DGW. It’s a big gamble, but 140-160 is a distinct possibility given the form of the players I transferred in. Like the end of any season, it becomes a crap shoot as manager rotate players or rest players depending on European matches left to play. However, confidence is high in this starting IX, just don’t like seeing Harry Kane on the bench, based purely on his potential. Then again I have been playing Kun Aguero nearly all year because of his explosive potential.

Chalk this year crazy year up to another learning experience, ending the year knowing more now than when I started the year. Using a few fantasy sites to my advantage, while going with gut instead of with the pundits. Ending in the top 100k will be an achievement but it will require a big leap forward to break into the top 10k next year, which is a more coveted position come the end of the year.