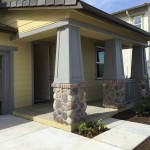 Is there such thing as a “do over” when it comes to new home buying? Right about now, I wish there was. Unfortunately, we are at a point in the negotiations, where we would end up surrendering all of our deposit as it is “non-refundable.” We knew this going in but little did we know we would face such a challenge when it comes to the finishing touch on our new home.

Built by DeNova Homes out of Concord, I was highly impressed initially with the homes they offered. That’s the problem when you walk the model homes, you are struck by the quality and “upgrades”, which come at a premium price. You don’t get to see a bare bones home with little to no upgrades and that is where the problems began.

Kelly and Wendy have been very pleasant to work with through the process to date. There have a been a few items that we were told our house would come with, only to find out that wasn’t included. Still, we were able to call them, ask questions and see our home through the later stages of construction. We entered into negotiations and the home was complete minus the flooring and counter tops, so we had already past many of the inspections we have signed off on. 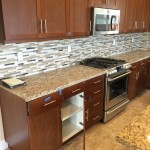 Looking back, the design center visit was a fiasco! We were allotted an amount of money by the developers to purchase this home, some of which would go towards closing costs and the remainder to be used on those “upgrades” that made the model homes look, something special. We spent the money accordingly on tile flooring downstairs, leaving just the Great Room as the only carpeted area. The carpet through out the house was upgrade, as the standard carpet looked and felt very cheap. What impressed me while walking the models was the full back splash in the kitchen, this is something I wanted, but could have purchased and had it install after we bought the house for a fraction of the cost. The remainder of the money went towards window treatments on all but 3 windows.

When it was all said and done, we felt good about our selections and went a few thousand over what we were allowed to spend, this came directly out of our (well my wife’s pocket). That left us with the bathrooms being finished in something called “engineered stone” or “e-stone.” Engineered stone is a composite material made of crushed stone bound together by an adhesive, (most commonly polymer resin, with some newer versions using cement mix). 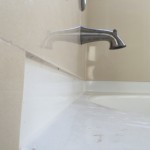 That is where the problem began, touring the models all of the master bathroom used upgrade tiles in the tub area. We never got to see a “standard”, as DeNova Homes call it, bathroom. Let me say I was in shock when I saw the lack of craftsmanship. I doubt anyone would accept the quality of work the developer was trying to pass on. The cuts were uneven, seams in highly visible areas and the e-stone hung out over the tub by at least a quarter of an inch. On all account UNACCEPTABLE! How did this pass quality control?

This was communicated early on and has been the top of the list to be repaired. When my wife marked a chip in the e-stone during our walk through last week, we were curious as to how the chip would be removed. The developers end up cutting off the bottom of the overhanging e-stone, so now it does not match the other two walls in the tub area. Again, unacceptable! In fact it was made worse. 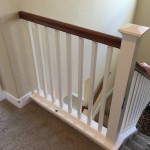 The newel post at the top of the stairwell was hit and cracked, not completely off but it was another area of concern before we walked through. The construction superintendent said we would never know it was there. His would could be no further from the truth, as we were looking for the repair and it’s terrible! It appears they filled the area, sanded it and repainted it. The post line isn’t even straight now. 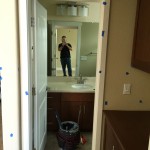 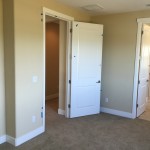 The finishing coat of paint had runs on the walls, door frames and baseboard, that is if it had a finishing coat. It appeared as if some of the trim work had only a single coat of paint or in a few cases no paint at all! Walls with very thin coat of paint, missing paint and fish eyes in the paint caused more blue tape to be stuck. How this house passed any sort of quality control inspection is beyond me. It’s been very frustrating dealing with the developer and not getting anywhere. To no one’s surprise you can walk the models and all these “aesthetics” were not an issue.

Now that we are a day from the close of escrow it will be curious to see what direction the developer takes. Right now I intended on having the escrow company withhold the transfer of the money unless our problems are fixed. There’s no way around not accomplishing the work. The developer has been made aware of this as well, so the ball is in their court, we will see if they want to play.