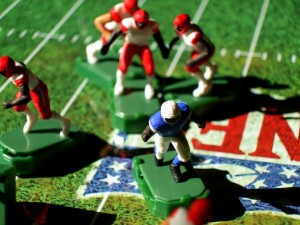 No longer does fantasy football rule my life. Saturday marks the 31st year I have organized and participated in the TFL or Toumi Football League. What started back in the early 80’s with 6 close friends who played soccer together has grown into lifelong friendships that span the coast of California. Through the years we have lost a few diehards, but gained new blood and made new friendships, yet the core group have been together for 31 years. It’s quite an amazing achievement, considering what the league and fantasy football in general has grown into.

A few years back I stumbled upon Fantasy Football Starters, a fantasy football site based out of Phoenix, Arizona. I started participating on their forums during the season and was asked to be a moderator, which was a wonderful gesture. I felt as if I might regain a love I had lost for fantasy football and possibly see that flame ignite while being an active participant and being involved.

Unfortunately 3 years later I emailed the guys behind FFS and told them to remove my alias as a moderator as fantasy football was no longer a priority in my life. In fact I have no interest in watching the NFL, sports in America have degraded that much. In these days of big money, poor sportsmanship, increased injuries and nonstop advertising I no longer care about the NFL, MLB, NFL and never did watch the NBA. Sports have no relevance in my life, outside of international football (soccer those American struggling to call it football).

So where does that leave me for fantasy football? I am acting commissioner in two leagues, the TFL and my work league, but won’t actively participate in the drafts. Actually considering an auto draft in my work league. Why not? The winning team did that last year. As for the TFL, I am sure many of the owners I call friends, aren’t happy with my lack of interest and participation. No longer do I make the roadie to Las Vegas or Palm Springs, as family and career come first. Not sure they all understand that, but I don’t expect them to. I would probably do better to call it quits and let more new blood join the league.

Not sure that even winning the league would increase my excitement about the game or the NFL. That is how bad it has gotten. So with that said I will participate, but it won’t be to the degree that I lived and breathed football, waiting for the Thursday night games and MNF. It’s just another sport that has become irrelevant in my life. Hopefully the interest remains, or I will lose contact with a number of childhood friends.