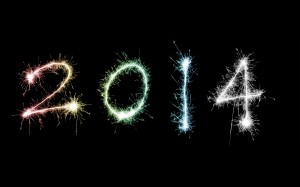 Here we are again, waving goodbye to 2013 and ringing in the new year. While it’s rare that my wife and I go out to a New Years Eve party, this year I am alone in the house, as she has taken my son to Disneyland with some friends. So it will be a very quiet New Years for me, one that I actually have off from work, the first time in 7 years. I have spent a fair amount of time recounting what has transpired since I composed the 2013 Resolutions last year, just as the new year was starting. While I am pleased on some levels, I feel as if I let myself down on others. So I look forward to my 2014 resolutions.

In 2013 I wanted to get into shape and improve my physique. With my diet under control and the weight still at my goal I felt I could see a major transformation with the addition of Stronglifts.com to my life. I actually started the program in October, 2012, but hit a stretch of 30 days without working out, in order to take care of my wife when she returned home from the hospital. That 30 day void took a bite out of the increases I was making when lifting weights and put me behind the goals I wanted to achieve.

I wrote about it often, but when the 12 weeks were officially up, I had not achieved the initial goals I set. It didn’t bother me, as I was learning, growing and seeing strength increases. When I added running in June, planning to participate in my first half marathon, I knew my strength training would take a hit. I did do enough strength training and running combined that I participated in my first Tough Mudder event in July at Lake Tahoe. Talk about awesome!

It was after Mudder that I started to have shoulder problems and lifting weights only seemed to aggravate the problem and increase the pain. It would be 3 months later that I would be having surgery to repair a torn bicep tendon in my left shoulder. While I was released to start strength training, I have been faced with some complications the last month and still have not started back lifting weights. Based on the pain I am currently having, I can’t lift or use the arm in a way that puts stress on the shoulder, it’s called adhesive capsulitis or frozen shoulder.

While our financial situation continues to improve, which is wonderful I never got around to getting organized and reducing the amount of paperwork I must deal with. I struggled with it all year long and while I made commitments to myself I failed to set aside time and take the necessary steps. It goes without saying this goal is still on my list for 2014. Every time I went to pay bills or look up account information I was surrounded by a pile of papers on my desk.

Reflecting on the year, it’s been difficult and challenging, one of the worst I have ever experienced. Might not know that as a regular reader on T6F. The year started off on the with  my wife, bed ridden in the hospital after major back surgery. When she finally was cleared to come home, it was to a new house, not the comfort and security she had know for the last 8 years. Along with the surgery, she had a list of other problems she picked up while staying in the hospital. It only got worse for me, as my relationship with my wife deteriorated. While I was taking care of her physical needs, I didn’t give a thought to her psychological needs and our marriage hit a very rocky stretch that lasted through September before turning the corner.

Yet October brought about some revelations and a bright outlook, I compare it to standing alone in a ray of sunshine, feeling warm. The worst is behind us now and our future looks bright. I have made a commitment to myself to change some of my behaviors and mannerisms while focusing on those people who are most important in my life. I have even compiled a short list of resolutions to give to my wife. Hopefully that step continues to make me a better husband and father.

While my lifestyle change has been wonderful, it’s still not “clean” enough. I hate using that word, since it can such a broad brush when it comes to eating. Unlike many others I read about on the Internet, my way of eating IS clean, yet I can improved. The last few months have been rough, but I still managed to eat very well, but sugar sneaked back into the diet. I enrolled in a PD-ed at Protective Diet and will look to better how I eat, while enjoying a vast variety of wonderfully prepared dishes at meal time. It is my intention to drive out the sodium and sugar.

After today’s run that 50k I spoke of could be in jeopardy. I got my assed worked today, the first time I have actually done trail running with hills. 900′ of vertical change in .23 of mile 1 has be questioning my chance at a 50k. Yet I will stay strong and run, run, run. Until the shoulder is healed, I will focus on running, more importantly continue to practice minimalistic/barefoot running. I love running in my sandals. Depending on how the 50k turns out, I might end up running the CIM come December. This was supposed to be my first marathon this year, but shoulder surgery took that opportunity away from me.t

I also want to participate in the Endeavour Team Challenge this year with 3 friends. It’s a HUGE commitment that includes 36 hours in the wilderness with nothing but your teammates. Running is just one component of this challenge. The other challenge this year is Tough Mudder with the group I ran with last year. Scheduled in July for Lake Tahoe I will look to improve on how I performed last year.

So I close the door on 2013, one that I would much rather forget, but do want to learn by it. I look forward to new challenges ad new responsibilities on both the work and home front. Hopefully these positive changes will make me a better, strong person going forward. Life isn’t supposed to be easy and 2013 saw major changes. Hopefully with those experiences 2014 will be a complete turnaround.

Have a safe and happy new year.