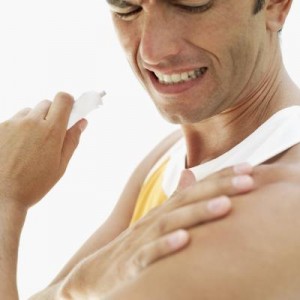 It would stand to reason that as soon as I start making good progress in my weight lifting I suffer a setback. While not confirmed by a physician, the pain in my left shoulder is telling me otherwise. Weight lifting has been one of the best forms of physical activity I have ever taken up. I have seen some positive changes since starting Stronglifts in October, 2012.

I’ll consider myself lucky that I have been relatively injury free, improving my mobility and flexibility with stretching. Until now, the only noticeable problem was a tight hamstring in my left leg near my glute. I can only assume I strained it while squatting, but it hasn’t stopped me to date. Yesterday I might have suffered my first injury that could put a damper on my progress.

While warming up during my squats I was doing a mobility technique called a shoulder dislocators, which allows more mobility in the shoulders allowing me a tighter back and closer grip on the barbell when squatting. All was going fine, absolutely no pain when doing this mobility exercise, not even the clicking I had my left shoulder, when I first say and attempted this some month back.

After finishing my squats I moved the overhead press and then to what I considered to be my strongest lift, the deadlift. I have been working on my form the past few weeks, as I noticed in some video I recorded that my back was not in the best position, so I had been working on correcting this to allow me to pull more weight while doing so safely. I was working with 235 lbs., which was the my highest work out weight to date for the deadlift. I had previously lifted 240, but it was only a 1RM (1 rep maximum).

As I took my stance, I bent over and got my grip prior to leaning forward in preparation for the lift. I pulled the weight very well twice before I noticed a sharp pain in my left shoulder. This is nothing new, I have seemingly had a pain in this shoulder that required me to go to the doctor some months back. After being prescribed a anti-inflammatory I was told to relax and not do anything would inflame the shoulder. Easier said than done, right?

I would pull the weight two more time before the pain became too much and I had to drop the weight and stop. Thankfully I was done with lifting, but not before I could not move the shoulder because of the pain. I have spent the better part of the last hour or so looking for advice on the Stronglifts Forum, as well as search engines in order to gain a better understanding of what problem I might have. From all my reading I can only guess it’s a form of shoulder impingement, which is somewhat a catch all phrase for many kinds of shoulder pain.

The pain has not gotten any better this morning and I will see how it feels on Sunday, which is my next scheduled day to lift. I might head into the garage and see which lifts hurt the shoulder more. Right now without actually getting under the bar, those moves that require me to pull, which would be the deadlift and the rows are out. Squats I should be able to accomplish, even if I have to move my hands out a big further, but even squatting I have experienced shoulder pain previously, but knocked that off to a lack of mobility. I will also give the bench press and overhead press a try. All of these will be performed with just a barbell to see how the movement feels.

If the pain continues into Monday, I will call the doctor’s office and schedule an appointment. Since this will be a follow up to a previous problem, hopefully they will schedule an x-ray or MRI. Not that I have any faith in my doctor to actually do that, as prescribing more medication is usually the easier option for him.