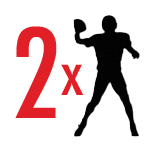 Digging through the archives of fantasy football material I have collected it’s interesting to see how the quarterback position has dominated scoring over the years. Years past it’s the running back position owners are interested in during the early rounds, which they build their team around. What happens if you the league you play in starts 2 quarterbacks? This is the case with the league I have managed for 29 years, owners have the option to start 2 quarterbacks or 2 kickers. During the early years many owners chose the 2 kicker option, but over the years that trend has turned and the quarterback is the more valuable position. This year I will attempt to implement a 2 QB draft strategy, as we have one of the strongest groups of QBs we have seen in the NFL.

Regardless of you scoring a league that allows you to start 2 quarterbacks will have you organizing your cheat sheets a bit different. Many years I have approached a fantasy draft with a balanced approach in mind in a similar manner as Russ Bliss discusses in his eBook, How to Win at Fantasy Football. While not always successful, it is one of many ways to build a team. It hasn’t been until 2008did we see an owner draft QB/QB in the first two rounds, going Brees/Brady. This move would have paid off, but the owner lost Brady for the season due to a knee injury. He finished in last place. In 2010 we saw a Brees/Manning combo that accounted for 637 (59%) total points. The following year it was Brees/Rivers going off for 837 points (43%). This year I believe we could see 2-3 owners going QB/QB based on the NFL starting to air it out.

So what is your plan as you prepare for your draft? Based on the previous year, it’s difficult not to draft a quarterback. I don’t believe you can go wrong with Aaron Rodgers, Drew Brees or Tom Brady at 1.01. Here are some interesting statistics from our league going back 5 years as it relates to the QB position.

The trend is ascending and this year I expect more quarterbacks to be selected in the first two rounds that any prior year. Considering how conservative I draft with my balanced approach, if the right draft slot comes up I will make a grab, going QB/QB in the first two rounds. This strategy immediately puts you in a bind forcing you to follow up in round 3 with a running back and then a wide receiver (or a second running back). Much like the WR/WR/WR/QB/TE approached I used last year, preparation is the key. You must get value at the RB position in round 3, which includes Steven Jackson, Marshawn Lynch, Fred Jackson and Darren Sproles, based off ADP between July 31, 2012 and August 1, 2012.

Depending on the talent remaining at the RB position at the start of round 4 it would not be a stretch to double up at that position, leaving round 6 and 7 for WR/WR or WR/TE. Since there is great depth at the wide out position this year (and based off ADP) Eric Decker and Steve Johnson could be available. If you buy into Robert Meachem in San Diego or Torry Smith in Baltimore, both could be there the following round. Round 7 shows Vernon Davis and Jason Witten could potentially be available. Even beyond this round names such as Fred Davis and Jacob Tamme could grace your team.

By round 8 or 9, it’s back following my balanced approach, similar to what Russ Bliss proposes in his eBook, How To Win Fantasy Football: Secrets of Gridiron Greatness. By this point in the draft you are draft back up players and looking to handcuff a running back or possibly a quarterback before drafting your defense and place kicker.

I believe this strategy works best for an owner who is slotted with a 7-10 draft pick, a draft slot of 1-6 could have you rethinking strategy when you are on the clock in round 2. A later draft slot will also allow you to draft a higher rated QB at start round 2, a player will will undoubtedly finish in the top 10 scoring. If you have a 1-6 slot in your draft and start 2 QB, it’s not impossible to accomplish, but you could be sacrificing a high scoring player at RB or WR if you start round 1 draft a QB. I will only push my limits on the QB/QB if, based off my projections (and history) the 2 QBs I draft have a track record of finishing in the top ten scoring (all players, not just the QB position).

Round 4 – RB/WR
1.I think this pick depends on the talent remaining at the RB position. If you can secure a starter in this round, I would consider following up round 3 with another RB. There is a good chance there will higher quality WR still available, but it’s important to secure 2 starting RBs while there are still some to be had.
2. If you feel there is more value in drafting a WR in round 4 then taken him. The longer you wait to secure your second running back, the thinner the talent pool will be, especially in the following round. This round is 50/50 or 60/40 when it comes to RB vs WR drafted.

Round 5 – WR/RB
1. This selection depends on what you did in round 4. If you drafted a RB, I suggest you draft a WR. There should be some solid starters available, possibly some on passing dominated teams.
2. If you drafted a WR in round 4, then secure your second starting running back. Talent is beginning to thin out as it relates to starters, but you might find a few names surprisingly still on the board. I would avoid a DET or WAS situation in this round as well.

Round 6 – WR or TE
1. Don’t get caught up in a potential run on the TE position in this round (Gronky & Graham not included), but if that happens you might be able to draft a WR who was bypassed in favor of a TE.
2. I do feel there is good depth at the TE position, so you can probably wait one more round to grab your starter.

By no means does this strategy equate to a championship season. It is just one of many draft strategies that owners can use. Our draft takes place on August 18, poolside at The Hard Rock Hotel in Las Vegas. Depending on what draft pick I pull I plan on implementing a QB/QB strategy in the first round. I will provide a post-mortem after the conclusion of our draft to see just how this strategy played out. I am always welcome to comments and suggestions, feel free to e-mail them to me at tbh [@] the6thfloor [dot] com.