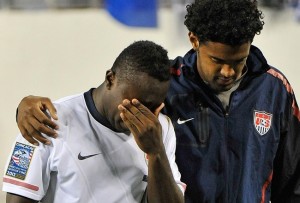 Why some will view it as anti-American, I am not a fan of U.S. Men’s Soccer. Overall they do not have (or had in the past) a team that can compete on an international stage, regardless of the manager. The bottom line, their players who don the red, white and blue are not experienced, nor do many of them be quality minutes in top flight football. I don’t believe starting a full season in the MLS really counts, as the competition is no better than a lower division in countries such as England, Spain or Brazil.

Last night I watch Brazil play out an easy 4-1 victory over the USA in Washington DC. While I missed the first half, I was not at all impressed with their play after watching 45 minutes. They were resilient and did not give up. Some will say they were unlucky and could have been rewarded with another goal or two. Conversely Brazil missed out on a few easy goals as well. The USA should not be hoping luck will get them to World Cup 2014.

Outside Clint Dempsey (Fulham), Carlos Bocanegro (Rangers), Michael Bradley (Chievo), Maurice Edu (Rangers), Steve Cherundolo (Hannover 96) and Tim Howard (Everton), the team is light on quality footballers applying their trade in top leagues abroad. Unfortunately starting in the MLS doesn’t provide the level of talent many of these players will experience on the international stage. Given many of the elder statesmen, like Landon Donovan, Carlos Bocanegro  and Tim Howard, who constitute the bulk of international experience will probably not play after the 2014 World Cup.

It would surprise me if the USA missed out on qualifying for the World Cup in 2014. I do like Jurgen Klinsmann at the helm, a manager with years of experience, with that international flair that had been missing on US teams for many years. Chalk that up to  the national team staying domestic with names like Steve Sampson, Bruce Arena and most recently Bob Bradley. I wish Klinsmann all the luck in the world, but unless he can make something out of this team, the clock is already ticking.