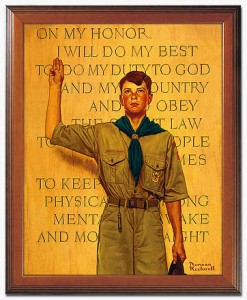 It was the annual open house at my son’s school last night. He is 6 years old, in kindergarten with an excellent teacher! Working in his class one day a week allows me some time to see what sort of progress he is making, when compared to his other classmates. At times I have been very impressed at what this little sponge is soaking up! In my opinion, he’s probably one of the top kids in his class when it comes to the “basics” of what kindergarteners should know before they move on to first grade.

I know many parents will say their son/daughter is doing their best or the best in the class. I am sure my opinion comes as no surprise. He enjoys school, then again didn’t we all at that age? The open house was also a time to see projects the kids had been working on, some of which I had not seen in the time I have spent in his classroom. He was excited to show my wife and I what he could do and who some of his friends were.

The highlight of the evening for him, as it was for most of the kinder, was the egg drop. The rules were simple, devise a way to prevent your egg from breaking when dropped from the school roof. The dimensions of your “delivery package” could be no larger than 7″ x 7″ x 7″. The box we used was 7″ x 7″ x 4″. My wife cut two plastic water bottles in half, secured the egg in the middle of the bottoms and taped them together. The bottle was then pushed diagonally into the box with padding surrounding it. We then taped the box shut and placed his name and teacher on it.

His drop was successful, the egg did not break and he was awarded a “My Egg Did Not Break” certificate for the efforts. He was quite excited about the success! For me the highlight of the evening, aside from watching my son run around with a big smile on his face, talking to classmates was visiting with the local assistant scoutmaster of the local Cub Scout Pack, who had a table set up and was fielding questions.

Years ago when I was in elementary school I was involved in Cub Scouts with friends I went to school with. While I never made much past Wolf or Bear, I did have a great time from what I can recall. I do vividly remember the Pinewood Derby and making my racer. Along with this event there were many other  things I learned that have remained with me growing up. I feel this experience is invaluable for young boys growing up.

Although looking over the awards some, of them don’t make much sense. For many of the awards, you must accomplish a specific number of tasks. I believe growing up I was too involved in sports to make time for Cub Scouts, thus ending my scouting. For my son, he is curious about many things, many of which are encompassed in scouting. I am a bit confused not seeing any sort of Morse code award that falls under Language or Communication. Okay, so maybe my amateur radio bias is showing through.

At any rate, I spoke with my son last night and showed and talked to him about some of what Cub Scouts participate in. He seems to be excited about this venture, as well as going into first grade. With any luck this will stick with us through the summer and come November he will join Pack 152 in Oakley and start working on his Tiger Cub rank on the road to advancement.