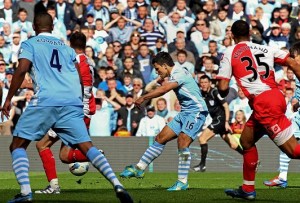 It’s called The Premier League for a reason and Match Day 38 culminated in one of the best climax’s in English football I have seen. Many announcers commented on the excitement this season as Manchester United and Manchester City battled with 18 other teams, which came down to 5 minutes of extra time before the league champion was crowned.

I am sorry to say most American’s can’t understand the excitement of football…soccer as many know it as. Not sure why, maybe because 45 minutes of continuous action is too long to follow. No commercials, means no beer runs. For some it’s the lack of scoring, a 1-0 game can be a thrilling game, much like a pitchers duel in baseball. Many I know find the game of football…err soccer boring. That’s fine. Many people give me about 3 minutes of watching the beautiful game with me, while at work, make a few comments and move on.

Fair enough, but today’s action some of the most amazing football I have seen played! It came down to the final day as both teams came in tied on points, but Manchester City had the goal differential advantage, a number that Manchester United would not be able to overcome. Unfortunately Manchester United let a lead slip away between Match Days 33-36, scoring only 3 points to Manchester City’s 12 points including a shocking loss to Wigan Athletic and derby loss 1-0. Either one of those games go for 3 points, even a 1 poin and Manchester United would have won their 13th Premier title, but it wasn’t to be today.

Queens Park Rangers played all out today, especially after thug, Joey Barton was sent off with a red card for an elbow thrown at Carlos Tevez in the 55th minute. Just 7 minutes prior Djibril Cisse had tied the game at 1-1, after a defensive lapse by Joleon Lescott. It would be 11 minutes later that would change the course of the game as Armand Traoré made a run past the Man City defense down the left side and his cross found an unmarked Jamie Mackie, who’s diving header put QPR up 2-1.

It was the 10 men defense of QPR and the play of Paddy Kenny that kept QPR on top, as Manchester City dominated possession and the shot advantage, but they came out without their shooting boots on. Yet Kenny came up with very big saves until the end of the game.

Thanks in part to Joey Barton’s red card and the ensuing drama getting him off the pitch, 5 minutes of stoppage time were added. This would be costly for QPR and conversely Manchester United, who played out their 3 minutes of stoppage time, defeating Sunderland, 1-0 and claiming the Premier League. Their celebration was very short lived.

Back to back goals in the 94th and 95th minute of the match sealed the victory and the league for Manchester City. Edin Džeko came off the bench in the 69th minute and his head found the ball off a corner kick, which brought Etihad Stadium to it’s feet! On the ensuing kickoff, QPR gave up the ball and went back into it’s defensive posture, which had been very good since going down to 10 men. Unfortunately the last minute of stoppage time saw Sergio Aguero beat the slide tackle of Taiwo and launch a shot near post, which found it’s way past the defense and Kenny to seal the victory for Manchester City.

It was truly an amazing end to an amazing season. Hopefully the Champions League Final between Bayern München and Chelsea prove to be just as exciting. For those who watched the semi-final between Barcalona v Chelsea, today’s Man Cit v QPR game was similar in nature, as Chelsea played down a man for much of the second half in that game and turned back every attack that Barcalona (arguably the best team in the world) threw at them. As a result of the 2 goals today, QPR gained a bit of respect and will remain in the Premier League for another season, avoiding relegation.