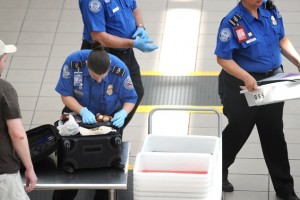 It always feels good to bring another story to light perpetrated by the TSA, who continues to illegally violate our Fourth Amendment right. This time it’s another seedy TSA baggage inspector in the spotlight after acts of impropriety. It seems Clayton Dovel was arrested on Feb 1 and suspended by the TSA after being “indicted in the theft of Apple iPads from luggage over eight months” as reported in the Star-Telegram. Are individuals like TSA agents/inspectors really that stupid when it comes to electronic devices? Are none of these folks aware that this devices can be tracked? A quick Gibiru search brings up some free apps from the Apple Store.

Now working for the airlines for 12 years I was never directly involved with theft while working as a ramp serviceman. I did witness bags being opened or searched through by other employees. I even heard of a story of a few ramp servicemen who worked for air freight that were trying to steal large electronic devices. Another set were brought up on federal charges for steal of U.S. Mail. I might be getting off the topic here, but theft and searching though bags does happen to luggage.

As for the TSA this is just another in a long series of wrongdoings that further begs the question, of why we need the TSA. I have said from the beginning, this is nothing more than a facade, window dressing if you like to make all outward appearance that the U.S. is now safer with the government running security checkpoints. It’s not! Remember this is the same government that has been at the root of many conspiracies through out history, including the attack on Pearl Harbor in 1941, the assassination of JFK in 1962, the Gulf of Tonkin Incident in 1964 and Watergate, in 1972-1974. I won’t bother including 9-11, which I believe was perpetrated by the U.S. Government.

Yet these incident and invasion of our rights will continue to happen whenever air travel is included. Unfortunately with the government’s power grab, the TSA is only on the receiving end of more power, as roadway, waterways and railways are now subject to unlawful search and seizure by the U.S. Goverment. News has already come to light about Big Sis and her perjury to Congress or the fact she lied in 2010 regarding the “safe” use of the AIT machines at airport security checkpoints.