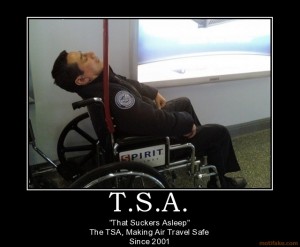 Maybe you read the story titled Security grounds Delta flight attendant out of the Buffalo Niagara International Airport, where the TSA deemed a flight crew member “unfit” for flight. The story will go on to read the airline removed that crew member from service, but it was the TSA wielding their imaginary power.

From the story, “A Transportation Security Administration officer at a security checkpoint noticed the male flight attendant’s irregular behavior and alerted Delta Airlines personnel.” This should not came as any surprise, as the TSA rolled out “behavior detection techniques” last year. As I have stated before, the TSA are NOT a police force but more of a mall cop, yet they are being given vast amounts of power. “Training includes 4 days of classroom courses, followed by 3 days of on-the-job training” for prospective BDOs” (source).

Now these BDO (behavior detection officers) are going to stop travelers and crew members alike from passing through security because of “irregular behavior?” I find it disturbing that SPOT or “Screening of Passengers by Observation Techniques” is going to do more good than harm for the TSA’s tarnished record. “So far, after three years of operation and almost $1 billion spent, SPOT has never been scientifically proven effective and has never caught one actual terrorist” (source).

I find it hard to believe this is adequate training for the mall cops protecting the nation’s airports. Again, another level of window dressing to make travelers more frustrated when they snake their way through a queue to the security checkpoint. For a flight attendant to be called out by the TSA for being “unfit” I don’t and then removed by the airline, I suspect there is more to the story that we might not hear about.