SOAPBOX: I knew better than go into this contest running low power, still I took the chance and did it anyway. Part of the reason was because the rig is a loaner from George, K6GT and I have been “babying it” so nothing happens while it is in my possession. The last thing I need is to damage his rig, so the past few months I have used it, its been all low power. Now low power could have been sufficient IF my backyard were full of towers with big antennas, but that isn’t the case. A single 5-band hex beam at about 40′ was what I had to work with and conditions were okay when the contest started.

On top of the low power I decided to work a single band. Ignoring the suggestion from Stu, K6TU to work 15M I decided on 20M, as I hoped it would stay open later to Asia/Oceania. Not sure if it did or not, as I got tired and went to bed before I had a real chance to check the band conditions to that part of the world.

My score and effort were terrible to say the least. I could hear many stations, but at 100w, which was probably more like 60-70w they couldn’t hear me. I did with SJ2W in Sweden, but that was my sole EU contact. There were a few Caribbean contacts, but 92% of my contacts were from NA. One of those was NR6O, or N6RO, Radio Oakley, which is but a few miles down the road.

Instead of working frustrated through Saturday, I had coordinated with Ken, the station owner and Dean, N6BV to sit and listen with Dean. Thankfully Dean wanted to take a break, so I took over the controls on 15M, attempting to work EU. It was interesting to see how Dean made it look so easy, pulling weak signals and their exchange out of the noise. Maybe it’s something I am not great at, as well as knowing many call signs, due to a lack of experience. Still with the tools on Win-Test, even having a partial call sign will allow you to guess that the suffix of the call you are trying to work.

I gave up 15M after about 2 hours and Dean took control. While I was listening in, Michael, WA6O asked if I wanted to listen to 40M. Now during the day 40M isn’t much, except for local area contacts. I spent about 90 minutes listening to noise, with a contact here and there, even moved a few to 10M. Still it was the experience of working as a team, with many more experienced than myself.One of my other disadvantages, not knowing the Elecraft K3. Still I feel it was good experience and thank N6BV for allowing me to watch, work, listen and learn. 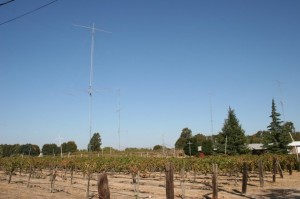 For those not involved in amateur radio, many of the terms I use many seen foreign. I have received a few comments from puzzled readers of The 6th Floor. Sometimes I forget this “language” we speak in the world of ham radio is not widely known. Starting Friday afternoon at 5pm PDT the World Wide WPX Contest sponsored by CQ Magazine kicked off. Each contest is a different mode, this week it was the SSB (single side band or voice) contest. If you read my news on Thursday, WPX SSB Goals I was hoping to put in a 10 hour effort and possibly see 200-300 QSOs.

In every contest you must decide if you operate low (100 watts or less) or high power (greater than 100 watts) and if you want to work all the available bands or one band. The three previous years I had operated high power, all bands. This year I decided to change that up (which I shouldn’t have done in hindsight) and working low power on 20 Meter band (14 MHz). I spent the better part of 2.5 hours and only worked 50 stations and pulled the plug on my operation. I knew better than and consulted my father, N6SV before making the decision.

Instead of spending the better part of Saturday, sitting frustrated in front of my radio I decided to head to N6RO about 2 miles down the road. I had e-mailed Dean Straw, N6BV and asked if I could sit, listen and learn. When I arrived I met Juan, W6NOW, Masa, K1GI, Dean, N6BV, Steve, K6AW and I believe Bob, K3EST. Our host, Ken, N6RO came out to the shack a few hours later. I plugged in with Juan on 40M, but the band was very slow, as it was daylight. I decided to plug in with Dean a about 60 minutes later, who was working 15 Meters (21 MHz) and working Europe at a good rate.

Dean asked if I wanted to operate 15 Meters and I hopped in the chair and started calling CQ NR6O, which was the unique club call sign we were using. The WPX contest is a great contest to work, since each new prefix you work is a multiplier, which adds to your score. So in this contest you can work everyone on all 6 bands potentially. When I took over, I was nervous, since this was only the second time I had worked at N6RO. I settled into a modest rhythm, but after listening in with Dean and some of the call signs he was pulling out of the noise I was somewhat frustrated I was not able to accomplish the same.

It was still a great experience knowing I had some big antennas putting out a very clean and strong signal across the world. Some of the new countries I worked were Dodecanse (J45), Namibia (V5A) and Kenya (5YA). Unfortunately none of these were using my personal call sign of W6ONV, so I cannot claim any of them in my log book. I had a few short runs where I made multiple contacts in a short period of time. I probably put in 2 hours on 15 Meters and Dean took control of the station before the JA’s (Japan) came on the air at which time Masa sat down.

I then took a short break and spent another 90 minutes, maybe 2 hours working 40 Meters. Again, it was very quiet and maybe had 10 contacts in that 2 hour time period, but it’s something that needs to be done in order to maximize points for the station. There were times Bob, who was working 10 Meters would move or send a station to 40 Meters if that operator had not contacted us on that band.

All in all it was a great contest weekend. I was thankfully to be part of the NR6O operation. I might have to start spending more time with that group and learning the ins and outs of operating from their shack. Unfortunately time isn’t something I usually have much of, so being able to commit 48 hours (as is the duration of this contest) or even 12 hours is not always possible. Still being able to relieve an operator even for a few hours is a blessing, especially if you plan on operating all 48 hours. Not sure what the rest of the year will bring. I do have N6RO to visit, as well as W6ZJH in Pittsburg for some of the shorter duration contests.