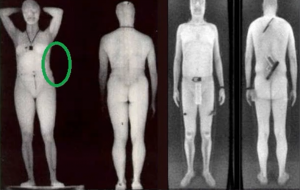 I have a new hero on the Internet. I read the original story a few days back, but held off commenting about the recent “viral video” from blogger, Jonathan Corbett. Just a few days ago he released a video, (original story and video) along with commentary of himself passing through a TSA nude body scanner without a metallic object being discovered.

I took a random metallic object, in this case a heavy metal carrying case that would easily alarm any of the “old” metal detectors, and walked through a backscatter x-ray at Fort Lauderdale-Hollywood International Airport. On video, of course. While I’m not about to win any videography awards for my hidden camera footage, you can watch as I walk through the security line with the metal object in my new side pocket. My camera gets placed on the conveyer belt and goes through its own x-ray, and when it comes out, I’m through, and the object never left my pocket.

This loophole seems to have been downplayed by the TSA’s “official spokesperson,” Blogger Bob said “it is one layer of our 20 layers of security.” Mr. Corbett eludes to this in today’s blog post, “The TSA’s official response (from Blogger Bob — blog.tsa.gov) was that “some guy” posted a video that was “a crude attempt to allegedly show how to circumvent TSA screening procedures.” The response then went on to say that they “can’t discuss” it and that the nude body scanners are just “one layer” of security so not to worry.”

While probably not the most important level of security within their 20 layers, it does seem to the be layer that is most controversial. A quick Google search will bring up story after story of confrontations at security checkpoints. This all in the name of security, which DHS claims has improved since it was federalized after the government attacks on 9-11.

Last check, the U.S. Government has spent $1 billion in the name of making air travel safer, yet very evasive. Nothing but controversy has surrounded these machines since they have started to show up at more airports across the nation. A more telling comment came from Rafi Sela, “who ran security for Ben Gurion airport in Israel, which is known for being one of the most secure airports in the world, was quoted saying he could “overcome the body scanners with enough explosives to take down a Boeing 747,” and Ben Gurion therefore refused to buy scanners. The US ignored this warning, and Mr. Sela never publicly explained his statement.”

For the latest on this developing story check out Jonathan’s blog, TSA Out of Our Pants!