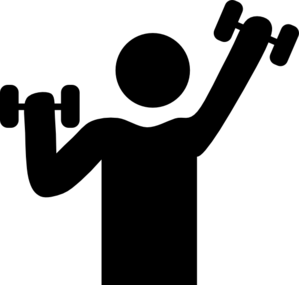 The results never have ceased to amaze me since changing my diet and taking my health into my hands since I don’t believe my personal physician has the best intentions for me. That based on his recommendation to supplement my “deficiency” with 50,000 IU of Vitamin D weekly. I continue to discuss my disappointment, Vitamin D, possibly changing doctors and “playing doctor” with other individuals who follow Dr. McDougall’s way of life. But why harp on that? I can control each aspect I just brought up. I have added exercise to this lifestyle change this last week.

I dusted off the copy of Power 90 I purchased from a late night infomercial back in 2003 and made it through Sweat I/II and Cardio I/II four days this week. This after breaking my red, 13 pound resistance band when performing the lawnmower exercise. Probably all the better since the 20 pound, blue band seems to answer the call. Friday was a rest day, but I was back at on Saturday, pulling off the sheets that cover the Bowflex Revolution.

While no where near the level of “expert” or even casual user, I spent time at work sifting through the the manual and looking at the different exercise routines possible. I then settled on two routines that were similar in nature after comparing 3 different work outs. The first was a 20 minute upper/lower body workout that would alternate body parts every other days.

The other 2 work outs are circuit training one listed as ‘Anaerobic/Cardiovascular’ in nature and the other as ‘True Aerobic” work out. The aerobic work out lists some of the same exercises as the anaerobic, but adds 30-60 seconds of aerobic rowing in between each exercise. I did a circuit of each yesterday, before finishing up with some bench press exercises and calling it a day after about 45 minutes.

Aside from getting healthier with this way of eating, the addition of exercise should help me achieve my goals come April, which should coincide with my next blood test to see where my Vitamin D level is after supplementing on a weekly basis. After a week, the exercising has been fun, I have enjoyed it and I think breaking up the routine will help keep things fresh and keep me interested. I have a long way to go before I can say I am where I want to go. Three months of training should be a very good base from which to build.

Neither exercise or this way of eating will cease after April, which will be approximately 6 month since making the decision to change my diet, giving up meat, dairy products and oil, while going to a plant-based whole food diet or in the words of Rip Esselstyn, living “plant strong.” This will go to show my doctor that even though the improvement on my blood, the loss of weight and overall health I gain is just a start, the next 3 months should speak volumes when we meet.