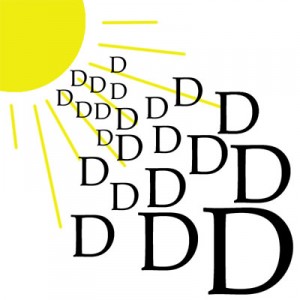 It’s been an interesting journey the past 3 months, as I have taken my health into my own hands. With the big changes, some would call “extreme” I have experienced better than anticipated results in a short period of time. But all is not good, sure my health is improving based on my PSA screening, weight loss and my dietary habits. As my doctor eluded to yesterday, this is a start. In my opinion a damn good start.

The more research I do online, the more confusion I am faced with. As I mentioned yesterday in ‘Doctor’s Opinion‘ I was not in full agreement with what my personal doctor had to tell me. Not being trained in the medical field, how do I go about disputing what my doctor is saying? For example the more light that is shed on Vitamin D “deficiency” I have my level of 23 is not considered low. In the opinion of Jeff Novick, MS, RD, “I would never personally take any action based on the results of any one test. Any test, that may lead to an intervention, should be confirmed with a second test, maybe even from a different lab.” He went on to say, “As of today, over 20 is considered sufficient and not insufficient by many many national and international health organizations.”

After further reading and referencing Dr. McDougall’s newsletters I am convinced that my doctor doesn’t seem to be looking out for my personal health. Why should he? Healthy people don’t need doctors. If there is no medication he can prescribe or test to run, I am not making him any money. In fact, I can’t agree with him when it came to what I ate and what I plan to do for the future.

Right now though, the more I read the more I need to question what I am being told and prescribed. As for the Vitamin D supplement, maybe it requires me to pay out of pocket in order to get a second test to confirm the first. The Institute of Medicine (IOM) stated that, “North Americans have serum 25-hydroxyvitamin D concentrations above 20 ng per milliliter, which is adequate for bone health in at least 97.5% of the population” (source). While this paper actually was discussing Vitamin D in a cancer prevention roll, there was another interesting finding. “The report provided evidence suggestive of a significantly increased risk of pancreatic cancer at high 25-hydroxyvitamin D levels (≥40 ng per milliliter). An increased risk of esophageal cancer at higher 25-hydroxyvitamin D levels has also been reported” (source).

My doctor, with his prescription of 50,000 IU (1 pill a week for 3 months) hopes to raise my Vitamin D level between 40-60. With some of the above information found after the fact, I am beginning to think the doctor is not out for my benefit, but that of his wallet. I am having a very difficult time swallowing the information he provided me, contrary to what I have recently found in established medical journals. Now with an increase in Vitamin D my body could be more cancer prone? Did I miss the benefit of adding this supplement somewhere? Thankfully taking my health into my hands has been eye opening, but I am not sure I will accept his prescription and take it for 3 months.