DIRECTIONS:
Peel bananas and freeze them on a cookie sheet or aluminum foil. Chop the bananas into pieces and place in blender or juicer until creamy. Top with fruit, nutmeg or cinnamon. Enjoy!

DIRECTIONS:
Mix all together in a bowl. Enjoy.

DIRECTIONS:
Put beans, spaghetti sauce, basil, brown sugar, and chili peppers in a blender or food processor and combined. Pour bean marinara into a sauce pot over Med-Low heat. Add spinach and broccoli. Heat for about 10 minutes until warm. Bring 5 quarts of water to a boil. Add a pinch of sea salt and stir pasta. Boil 10-12 minutes or to desired tenderness. Drain pasta in colander, and mix in a large bowl with bean marinara. 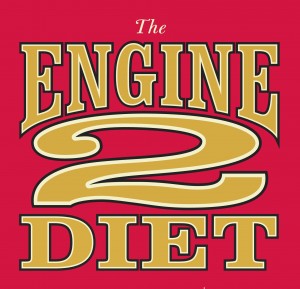 It has been an interesting and informative journey for nearly 3 months, now that I have changed my diet, which is really more a lifestyle change. I added another Forks Over Knives documentary today called The Engine 2 ‘Kitchen Rescue’ with Rip Esselstyn, which is available on Netflix. Rip is the son of Dr. Caldwell Esselstyn, surgeon, who “completed one of the most extensive studies on the relationship between the heart and diet–proving that a plant-based diet can reduce and even eliminate heart disease” (source). Currently Rip is employed as a firefighter with the Austin Fire Department.

I was introduced to Rip in Forks Over Knives, as his story was used as an example at the firehouse he works at. The fire fighters at Engine 2 had a peer who’s total cholesterol was 344. In a challenge they decided to move to a “plant strong lifestyle.” This documentary explores two families who decide to take the challenge and learn about a plant based, whole food diet.

Much like FOK and The McDougall Program, Rip is introduced to the families and prepares them for the change they will experience. The refrigerator and pantry are open and foods that make up the “standard American diet” or SAD are removed. The families are introduced to reading the nutritional facts, as opposed to the label to see what they are eating. A trip to the local market for vegetables and a little education make these families eager to see what flavorful recipes Rip can cook up.

As a “SAD” eater I have experienced what these families were going through, looking for recipes that are filling or “having substance” as my wife calls it, as well as having good flavor, while avoiding those foods, such as meat, dairy and oil that are not healthy. Having cooked for 3 months now my library of recipes continue to grow. Initial it was difficult or found it time consuming to put together a good tasting meal that my wife and 6 year old would enjoy and look forward to eating.

With the help of the families rip put together a daily menu of breakfast, lunch and dinner for both. Needless to say the meals were quick, easy and from the comments of the families very tasty. For example, the Wali Family was introduced to Ann’s Panani Sandwich with Hummus, Mushrooms and Spinach while the White couple were introduced to am American favorite, which has been made heart healthy, a vegetarian burger with potatoes cut into fries. Both meals made with plant based, whole foods and introducing both to a “plant strong lifestyle” in the kitchen.

The Engine 2 Diet ‘Kitchen Rescue’ also has a supporting web site that provides some good introductory recipes that are quick and easy for people wanting to take control of their healthy and eat differently. Rip also authored The Engine 2 Diet: The Texas Firefighter’s 28-Day Save-Your-Life Plan that Lowers Cholesterol and Burns Away the Pounds. This book is similar to what Dr. John McDougall outlined in The McDougall Plan. Unlike Dr. McDougall’s 12-day program, Rip provides readers with a 28-day plan to better health.

Overall I enjoyed the documentary, which I took as more supporting evidence for a “plant strong lifestyle.” It’s a bit quicker and easier to follow than Forks Over Knives and doesn’t include the numbers, science or studies behind the diet. Rip does a good job of keeping it simple for the family members, while providing them introductory information to what the lifestyle change constitutes. I do have his book on my want list and look forward to reading it. While I am promoting a plant based, whole food diet I won’t push others to join me. It’s a personal decision and one must make a strong commitment and have the desire to change your lifestyle for the betterment of your health.

Radiosport or participating in amateur radio contests are a favorite activity of mine. Unfortunately due to time constraints, my job and family responsibilities I don’t always have the opportunity to participate with a full effort, but make the most of my time allotted. With all the remodeling in 2011 I was not able to participate in as many contests as I did in 2010. Not really a big deal since there’s a contest nearly every weekend of the year, some major, some minor but a contest nonetheless.

This year has gotten off to a slow start, as I was hoping to put in a full effort in the ARRL RTTY Roundup the weekend of January 7-8. Unfortunately a friend in need was more important than listening to diddles for 24 hours. I was frustrated, as I have done well in this contest, but family and friends always take priority over radio. Thankfully a few weeks later the NAQP CW rolled around and I posted my best score ever with 281 contacts. Not great, when it comes to all the experienced CW operators who participate, but a personal best, which pleased me.

This weekend was the second leg of the winter NAQP using phone. Let me preface this by saying I enjoy working a variety of modes from RTTY, CW and PSK31 to the more obscure Feld Hell, Olivia and even trying some weak signal work. Unfortunately I seem to have lost of the lust for actually operating SSB or phone (actually talking into the microphone for those non-hams reading). When I first bought an HF radio, SSB was all I wanted to do, but due to my limitations and the lull in Solar Cycle 23 making DX voice contacts was difficult.

When I upgraded my station to a Yaesu FT-1000MP and was given an Alpha 76PA amplifier, I was on my way to putting out a bigger signal, but still limited by my antenna. Even then I was still fascinated with actually speaking with someone in an exotic destination and logging a new DXCC entity. But when it comes to contesting, my station does not fair very well.

Even with the upgrade of the antenna from the Hustler 6-BTV to a Steppir BigIR MkIII and most recently to a 5 band hex beam for the low bands, my signal has improved, but I must face reality that I am not set up very well for low power SSB operations. This was evident yesterday when I was hoping to put in 2-3 hours during the NAQP SSB contest and help my NCCC team achieve a better score. To be completely honest, I don’t think I even lasted 1 hour on the radio. I started off on 10M, moving to 15M and then to 20M, finally dropping back to 10M before calling it quits. In my limited operating period I only worked 22 contacts before getting frustrated.

Not sure if I was more frustrated that I could not hear many signals using the hex beam or the fact I believe my signal was not strong and clean. My signal I based solely on watching the ALC meter, which continually was exceeding the upper limit range. Since NAQP is limited to 100 watts, I can only assume my signal was good, but I had no definitive way to check without asking another operator for a report. This frustrated me even more when my power output was probably more along the lines of 40-50 watts.

Even running low power I began to experience RF issues again. Previously it was on 10M CW, but I had no issues on 10M or 15M yesterday, but 20M SSB was causing all sorts of problems with my USB devices. I would key up and lose connection with my keyboard, trackball, webcam and weather station. I had not experienced this level of RFI on 20M before. I will need to troubleshoot the shack again to attempt to eliminate this RFI before I make another attempt on 20M SSB.

While I won’t use SSB as my primary mode of operation, I will still put in some minor efforts when it comes to using the mode. Until I get further antenna upgrades, which I don’t see happening any time soon I will need to make do with what I have. I might be able to work out the RFI, possibly upgrade the feed line to the hex beam and figure out if the SteppIR needs to be returned for repair. These are just a few of the limiting factors I have to deal with. Thankfully I now have the ability to get the hex beam up to a minimum of 50′ as I mounted it on the roof of the garage, attached to a second story wall.

Thankfully I will stick to CW and RTTY as my main modes of operations for contesting. There will be a few exceptions, such as the CQP and ARRL Sweepstakes. If time permits and a station is available, I wouldn’t mind attempting a full effort in a SSB contest. If the problems do get worked out, I wouldn’t even mind a full effort on a single band, like 15M or 20M, which are probably my strongest bands.