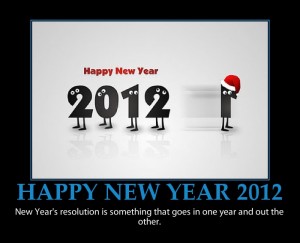 So looking back to the end of 2010 at my resolutions there were 4 items I added to resolve in 2011. The first item that I can claim as successful was finishing the house. We submitted 2 insurance claims in 2010 for leaks and burst pipes that equated to about $60,000 in home repairs. While I could have been more conscientious with the money and made it go further, in the end we were able to repair about 85% of the house.

Along with a new water heater and a complete copper re-pipe, we installed all new carpet and tile, as well as painted the entire interior of the house. We removed and replaced the kitchen cabinets and remodeled our remaining bathroom. Thankfully in February we finished all the work and had what amounted to a new house. Still we agree we would like to move out of this “money pit” into a newer home.

The other item that I had success with, albeit a bit late in the year was my health. In July I had my yearly physical and the doctor was still not happy with my weight and cholesterol level, both of which had increased since my previous examination. So regretfully I agree to start taking cholesterol medication in order to control my rising level.

In October, after a discussion with a co-worker I watch the documentary, Forks Over Knives, which opened my eyes as it relates to the “standard American diet.” It wasn’t but a few weeks after watching this and a few other documentaries, along with finding Dr. John McDougall I resolved to change my diet and get healthy.

Since the end of October I have made the move to a whole-plant diet, including grains, legumes, green and yellow vegetables. Gone from my daily lifestyle are meats (except fish), all dairy items and oils, which I used to cook with. These changes, which can be seen as “extreme” by some have resulted in very positive changes. In just 2 months I have lost 20 pounds and my cholesterol level has dropped 64 points since my last blood test in July! I have felt great and enjoyed learning about nutrition, but this 2 month period has been “transition phase” as I plan to add exercise to the routine in January.

As for the failed items, I did not add a second job to my itinerary. While I would love to work, part time I didn’t really seek active employment. Overtime at work has been plentiful, but I don’t really like to rely on this as “added income.” Now that my son is in school I work at his school one day a week on a voluntary basis. If I could find something to give me “pocket money” again working at home it would be great, but not sure now is the right time. If the situation arises, then maybe.

The final item from 2010 was getting down to San Diego. Thankfully after my 5th year anniversary at BART I was awarded with my 4th week of vacation. Thankfully those 40 hours were given to me up front, so now I am working on building my vacation time up. Currently we have March, 2012 as a target date to head south to  Anaheim and San Diego. With any luck I will finally get back home, somewhere I haven’t’ been since my wife was pregnant with Zachary.

As for 2012, I am looking forward to the continued challenge to improve my health. I have already made big strides since October and come January 9, I am going to challenge myself with Dr. John McDougall’s 12-day program. Thankfully it won’t be difficult given I have already had a 2 month period where I have cut out and cut back many of the foods that were not good for my health. In addition to the continued dietary change, I am adding exercise to the routine, start out with 30 minutes a day. Currently I do walk at work, about 20 minutes a day so I will look to build on that.

My goals for my health to drop another 15 pounds to get my weight to a healthy 175 pounds. I want to see my cholesterol number continue to decrease down to 140-150 mg/dL. In addition to these key figures I would like to add a bit of muscle to my frame, if that results in a weight a bit about 175 pounds, I will accept that. Hopefully our Bowflex Revolution will finally get the workout is was purchased for a number of years back.

While I have not spoke about the 1968 Mercury Cougar I have sitting in the garage, I would like to put some time and money into it this year. Since I have about $15,000 already invested it’s just too difficult to sell and take the loss. A majority of the work is already accomplished. Before the birth of my son I was able to get the engine rebuilt by Bad Ass Engines. I rebuilt the front and rear ends and replaced all the brakes. The C4 transmission was also rebuilt by a local transmission shop along with the exhaust.

I would like to get it running before the end of 2012, it will take a few thousand dollars and a fair amount of time. Thankfully I have a local friend who has offered more than once to help me. That leads me to work that needs to be accomplished before I can start on the Cougar. I need to get the garage organized. No matter how many times I push boxes around, clean my workbench and try to get organized it never seems to fail, the area ends up in disarray.

I am surprised when I see we still have items in boxes that we put there a year or two years ago when we were moving stuff around or remodeling the house. So getting organized in 2012 would be a great achievement!

My last goal…to go on vacation! As strange as it sounds, I have not been on vacation for well over 6 years. After spending a year training at BART I used up many of my vacation days the next 18 months. Unfortunately after I tore my ACL I was laid up for 3 weeks and exhausted all my vacation time. Thankfully I picked up 40 hours as I celebrated by 5th year at BART. So come March when my son has time off from school, we are planning a road trip to SoCal.

Our trip will probably be a total of 7-10 days. We will spend 2-3 days in the Los Angeles visiting friends, as well as a day or two at Disneyland. With any luck I can get together with my buddies and introduce Zachary to fishing! Following that stop it’s off to San Diego to visit my parents. It’s been a very long time since I have been “home” and miss it. With any luck we will see San Diego twice this year, as my sister, her husband and my wife and son will hopefully do Christmas in San Diego with my parents.

As for tonight, New Year’s Eve, we are spending with friends in Oakley. While I will call it low key, knowing the family friends, it will be good food, drink and lots of karaoke! I am sure the kids will have a great time playing with each other. It’s also great to know my aunt will be celebrating with us! Looking forward to a great 2012, before the world ends!