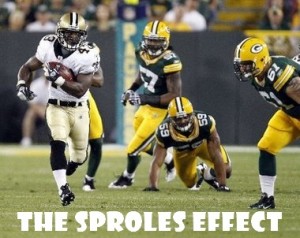 It seems to happen early in fantasy football every year. A lower tiered player comes to the forefront who was not necessarily expected to outperform star players. Unfortunately, no matter how good you are at predicting statistics, providing advice to other owners or making decision based on fantasy tools you use, the biggest part you have no control over is luck.

We have read and heard Russ Bliss discuss this factor previously. Last night Saints running back, Darren Sproles scored 2 TDs and had 7 receptions for 75 yards. If asked would I start Sproles chance are pretty high I would have said no on many accounts. Why? Simple. He was one of three running backs in an RBBC for Sean Peyton. Preseason did not give us a good read on how each of these backs would be used. Knowing Sproles from watching him for years in San Diego, Peyton used him exactly how Norv Turner used him. Sproles, along with returning kicks, was used as a receiving back out of the backfield. On Thursday he happened to capitalize on his ability to catch and run.

On a similar note, rookie, Randall Cobb of Green Bay scored twice, including a 108-yard TD return and a TD pass from Aaron Rodgers. He finished with 2-35 yards and 2 TDs. Should he have been considered a start? Nope, not with the weapons the Packers have, there should have been no thought of even having him on your fantasy roster.

The morning after, we now have fantasy owners bum rushing the waiver wire to pick up Darren Sproles (if he wasn’t drafted in your league) as well as Randall Cobb because of a single game performance. As FFS moderator James stated, “Do you think Sproles has a 41 point production week left in him the rest of the year?” The last time Sproles had 2 TDs in a game was against 2009 against Denver in Week 5 in which one was a kick return, the other a TD reception. In Week 2 of that same year He had 7-124 yards, 1 TD. Again, he was not a real fantasy option for many owners.

Another comment I subscribe to. The fantasy football season is a marathon, not a sprint. Don’t buy into early season hype or performance based on a single game. If you do, you could end up chasing hot players all season long, while possibly ignore talent you have on your bench. While it was great to see Sproles do well reunited with Drew Brees and amazing to see the talent Randall Cobb bought to the Packers I have neither on a watch list after just a single game. Great performances that added to the Saints/Packers shoot out, but after a single game I am not ready to start sprinting.