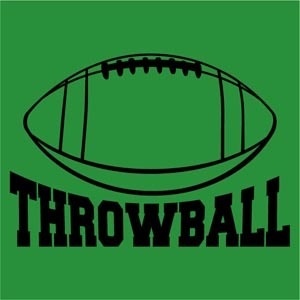 I guess this is really the only way to track more than one fantasy football league, let’s call this Team #3. Yet another Throwball Heroes team looking to contend. I signed up to participate in a friend’s 12-team Yahoo league. Scoring is standard with a few modifications. The draft was 16 rounds, 8 players and 1 defense start each week (QB, RB, RB, WR, WR, TE, 2 FLEX, K, DST). I was randomly assigned the #3 draft slot and here is how the draft went last night.

Even though we are non-PPR I decided to roll with Ray Rice this season and skip on Chris Johnson, even though he had signed a new contract earlier in the day. While CJ2K might end with better stats, I am taking a chance that he will be slow on the start. Rice has been there since day one and has a new lead blocker, which means he could have a career year rushing and receiving in BAL.

Things got really weird in only round two when Nicks slipped to me in the 10 spot after Kevin Boss and Joseph Addai were selected. Megatron went just before my decision to draft Nicks. I have been pretty consistent with him drafting him in all three leagues. Not as big named or as flashy as some of the other top WRs, but should have outstanding numbers this season. Feel lucky to get him at the end of round two.

Maybe the neck injury scared some owners when it was time to draft a QB. No surprise to see Vick, Rodgers, Brees, Rivers  and Brady selected by the end of round two. It was just too hard to pass up a staple in fantasy football named Peyton Manning. Neck injury and all I will take my chances in the third round. Now gives me a top RB/WR and QB. This sort of goes against my personal rule of drafting injured players, but the potential here very high for another successful year.

I was watching 3 players in particular as this round started; Miles Austin, LeGarette Blount and Ahmad Bradshaw. Unfortunately by the time I was on the board, all three of these players had been selected, but Jahvid Best was still out there, so he ended up being my #2 starter. Again, too bad it’s not PPR as Rice and Best make a nice duo. Only concern with Best is his ability to stay healthy, missing much of last year with turf toe and had a previous concussion already in the pre-season.

The TE position in the 5th round probably isn’t popular with many owners, sort of like drafting a kicker. The only player I could see taking in this round at TE is Antonio Gates. He is so skilled at his position and can produce some big points, to the degree you could consider him another wide receiver. Look at what he did in 10 games last year. He is now healthy with Rivers and Vincent Jackson, this was one of my better picks, even though it was early in the draft, it was the best available on the board.

Not sure how Moreno slipped past so many owners. Maybe they were going off what he did last year. From all the reports he has played well and looked good in pre-season. But we know not to buy into the hype. If he is healthy with Orton back at QB and John Fox at the helm, Moreno could break 1000 yards this season. My only worry is Willis McGahee vulturing some TDs this season and when Fox puts Tebow in to run the option near the goal line. Still Moreno is a quality #3 running back.

I was hoping Santonio Holmes was slide as we started this round, but with the first pick he was off the board and I was back comparing a small pile of wide receivers. I had Kenny Britt, Percy Harvin and Plaxico Burress on my short list. I wasn’t fond of the offensive line issues in MIN and McNabb’s ability to get the ball downfield to Harvin. Burress returning after a stint in jail didn’t excite me, so I took the headcase in TEN, Kenny Britt. He is a home run type player with the ability to get down field quickly. He won’t be suspended and now hopefully Hasselbeck can get him the ball…a lot!

I should have been looking RB in round 8, but four picks prior to my turn Brandon Jacobs was selected. He was the last “big name” running back I had been watching and now that he was off the board I was looking for value. Robert Meachem has been talked about quite a bit this season with Colston a bit slow to recover from last year’s injury and Lance Moore was nursing a groin. This left the door wide open for Meachem who could have a breakout season with Brees in NO.

Never been much for drafting rookie players, as many of them don’t pan out their first year. Thomas has the skills, but is still learning on the job. I suspect he won’t get much playing time early in the season, especially with the more experienced Reggie Bush on the team. He was somewhat of a flier in round 9 in hopes he can get into a RBBC with Bush as the season progresses.

Another great PPR wide receiver, but even though we get no points for receptions, Amendola still had a great number of targets last season, partly due to Mark Clayton being injured. He is the #1 WR in St. Louis and has a very strong rapport with Bradford at QB. I look for him to only get better and increase his statistical out put this season.

I jumped a bit down on the tier chart to draft Fitzpatrick over guys like Orton, Sanchez and Cassel. I am hoping Buffalo can put up some good offensive numbers like they did last year, which surprised many fantasy owners and found them scrambling to the wire for this team’s talent. This season I was really just looking for a bye week cover and a player who could be an every week starter if I needed him to fill a full time role.

I might have screwed this pick up. I had forgot Tynes is battling a quad injury and might not be ready for Week 1. I don’t want any leg issues when I am drafting a kicker, but I overlooked the injury and selected him anyway. If he is not ready to play, chances are high I will drop him and pick another kicker off the waiver wire. There is enough talent out there I don’t feel this will cause many issues at all with my team.

Another running back in new colors is Barber. He continued to slip and I continued to watch him, as he could play a goal line role in Chicago. Give Forte the brunt of the work and give Barber the ball inside the 20s. I can live with that. Right now I don’t intend on Barber starting regularly, but he is a good bye week cover and most likely Forte’s replacement if an injury occurs.

How do 11 other owners continue to skip over Gronky? Round 14! Are you serious? I was very surprised to see him still at the top of my TE cheat sheet in this round. Having Gates I probably didn’t need a #2 TE and goes against conventional wisdom of other fantasy owners. Still when looking at “BPA” (best player available) Gronky was it, even at TE.

Another one of my sleepers was still on the board and I was never really worried he would be drafted. Although it was no surprise another owner jumped on the hype of Antonio Brown, leaving me to draft Sanders. Now over the foot injury I think Sanders will put up good numbers as the season progresses. He adds quality depth to my team.

Many owners put very little thought into kickers, I put very little into my defense. Rarely will a defense mark or break a week or my season. I could probably end up playing match ups all year and get by. Arizona has good match ups the first 3 weeks, opening against a rookie QB in Cam Newton. Their defense was also ranked relatively high, now hoping they can improve on the points against, which is really the only thing worrying me.

So my third and possibly final draft of the season. I was pleased with how it went I like the foundation I created with Rice, Nicks, Manning and Gates, all of whom could be top players at their respective positions. Being a 12 team league, talent did thin out a bit quicker than I am normally use to in a 10 team league, but I feel I maximized my value in each round.

The rookie, Daniel Thomas is a minor concern as well. He has been a bit slow to pick up on the offense, so the potential time share with Reggie Bush might not happen early in the season. Bush has had durability issues and if he is hit with an injury that could open the door for Thomas to have an impact. Thus I am not a big fan of drafting rookies, as I mentioned earlier. Thankfully I do have Knowshon Moreno slated to be a flex starter leaving Thomas and Marion Barber on the bench.

I like the depth of my WRs, Robert Meachem ends up as my flex WR with Amendola and Sanders on the bench with Gronkowski at TE to cover my bye weeks. My starters are solid, big play receivers, but I am somewhat concerned with Britt. I was not really desiring a headcase on my squad, but it came down to talent and what he did last year. While I don’t like his antics off the field, as long as he is the #1 in TEN, keeps out of trouble he could put up some good #2 WR numbers for me.

I have no doubts I will make the playoffs with this team when comparing it to how the other owners drafted. I believe the auto draft guys are already out of luck, as those 5 teams are not going to be very competitive. The other 6 teams have some good players, but are not very well balanced. Then again a balanced team is not always a winning team. Fantasy football does take a dose of luck, so while I believe I have a good team I will take all the luck I can get this season.