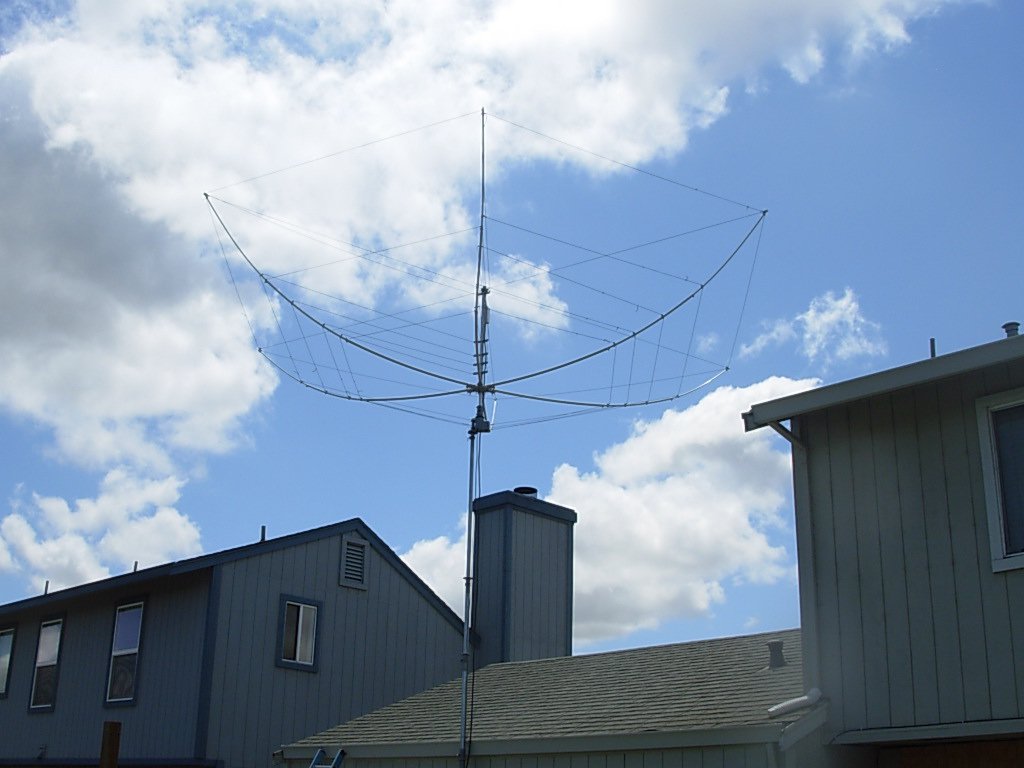 Last Tuesday was a wash, literally as a quick moving storm hit Northern California and left me inside waiting for the rain and wind to pass in order to put up my newly acquired Rohn H50. Wednesday was a beautiful morning and I made an early trip to Lowe’s in search of some type of hardware to use as a wall mount for the telescoping mast.

I was in luck, bought two mounts that were adjustable up to 3 inches (the mast is 2.25 inches in diameter). This hardware is actually used for mounting EMT conduit for electrically wiring and while not being able to use these mounts 4 inches off the wall I quickly added a few pieces of wood to give me the clearance needed to raise the mast.

Not long after I got the Rohn in the air, I did go and order a pair of heavy duty wall mount brackets from 3 Star Incorporated. At $19.95 a pair it was a better deal than the $20+ I spent at Lowe’s. The temporary brackets I am using will allow me to use the antenna at about 30′ until I get the Rohn brackets installed. With any luck I should have the mounts by Friday and if I have the time I can replace my makeshift brackets in time to operate in the RAC Canada Day Contest this weekend. 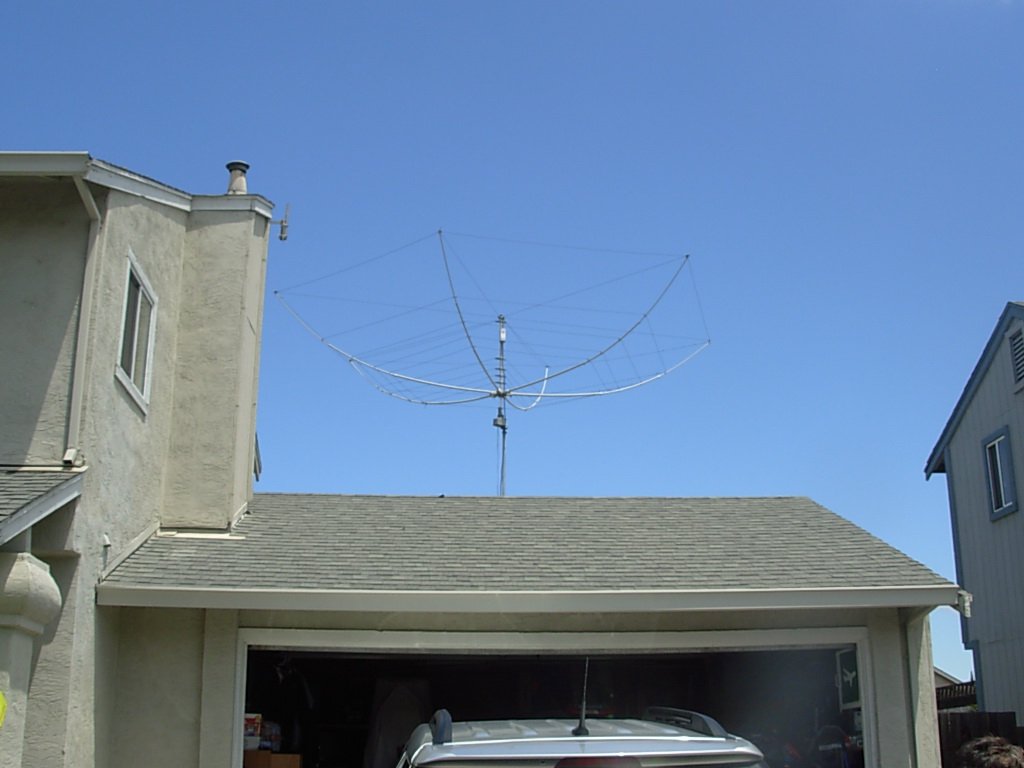 I mounted the rotor/hex beam assembly on the top section of the telescoping mast (1.25″ diameter). The difficulty came in trying to push the entire assembly up. If I had a second body I probably could have run it up to 40′ and using a guy wire pulled the antenna mast up into position. As it stands now 35′ isn’t bad, but I want to get it to 40′ which seems to be an optimal height based on research by Steve, G3TXQ. Once the new mounts are in place I should be able to add about 5-10′. With any luck I will be able to leave it in the up position when not in use, even though that was not my original intentions.

This antenna never went through the HOA to gain “exemption” I just took it upon myself to raise this antenna, piggybacking off the HOA’s approval to allow a 24′ Hustler 6-BTV back in 2007, followed by an upgrade to a SteppIR BigIR in 2009. Since raising it in October, 2009 I have not received any complaints from neighbors about how it looks or any interference it has caused.

It really comes as no surprise. These days it seems increasingly difficult to go anywhere without the possibility of being searched by the TSA. Their duties, which include the groping and molestation of of thousands a year is usually confined to airport security checkpoints, their presence “seem to involve giving airport-style pat-downs and screenings of unsuspecting passengers at bus terminals, ferries, and even subways” (source).

These “random” screenings are part of the TSA’s VIPR (Visible Intermodal Prevention and Response) program. “The VIPR program first started doing searches in 2007, and has grown since then. Currently, the TSA only has 25 VIPR teams doing these impromptu searches: in 2012, it wants to get 12 more.” These unlawful searches are being conducted to help avoid incidents like the 2004 Madrid train bombings.

In 2009 the VIPR program made an appearance during the July 4th weekend in the Bay Area on BART. “According to a Transportation Security Administration spokesman, the VIPR team’s mission is to share Washington, D.C.’s anti-terrorist security tactics with local transit police and train them in federal procedures, plus sometimes also serving as extra staff for special events. In theory, this sounds like a good idea” (source). The weekend was spent playing “tour guide” to the visiting agents.

While VIPR is being rolled out nationwide, which now includes ICE and Border Patrol, YOU are being targeted illegally. I am curious since I ride the train 3 days a week what will happen if I am stopped for a “random seach.” First I ride as an employee of BART. Much like the airlines, I am sure that does not make me exempt. Second I carry a few knives with me. One a Swiss Army pocket knife and second a Gerber serrated, folding knife. Should I expect both of these items to be confiscated from me? If this were an airline checkpoint, you can damn well bet they illegally take my belongings.

What else would be interesting to note is what their response would be, if I refused and decided to leave the station. I am sure my “behavior indicators” (which I have commented on before) would tell them I am hiding something and deemed a target. This would possibly give them “just cause” to detain and search me.

There have been stories posted, most notably Michael Roberts, an ExpressJet Airlines Pilot who refused and attempted to leave the checkpoint before submitting to a security screening. You can read what transpired. We’ll have to wait and see what happens if (more likely) when random screening is implemented. This is definitely the start of the story with no end in sight and probably only going to get worse.

What? Three separate 4-hour contests, each separately scored and awarded

Teams? Yes, teams of 10 or less, no geography restrictions

Scoring? Each 4-hour contest starts at 0 points, 0 mults; work someone once per band per event; score 1 point per QSO per band and 1 mult per call sign once per event

when it comes to security? Since America is going to hell in a hand basket and the sheeple would rather not pay attention and speak up when YOUR civil liberties are being violated every day you step into an airport.

Yet ANOTHER asinine story comes to light when a 95-year old woman flying out of northern Florida was asked to remove her adult diapers because…as the media reported, “a suspicious item.” Bound to a wheelchair and stricken with leukemia the TSA agent could not resolve an alarm. “During any part of the process, if there is an alarm, then we have to resolve that alarm,” said Sari Koshetz, a mouthpiece for the Transportation Security Administration. I guess a wet and hard Depends undergarment could be considered “suspicious.”

It took 45 minutes to perform the pat down to make sure YOU the traveling public was safe from this would be terrorist, who was 95 with leukemia and bound to a wheelchair. That’s YOUR tax dollars at work, providing the best airline security money can buy.

Jean Weber, daughter of the woman in question has filed a complaint. “I’m not one to make waves, but dadgummit, this is wrong. People need to know. Next time it could be you.”

How are the actions of the TSA harassing and groping a 95-year old woman considered professional or appropriate? ” After feeling “something suspicious on (her mother’s) leg they couldn’t determine what it was…a TSA agent came out and told her that her mother’s Depend undergarment was “wet and it was firm, and they couldn’t check it thoroughly.”

“Every traveler is a critical partner in TSA’s efforts to keep our skies safe,” Administrator John Pistole, who ordered the new approach, said last fall. “And I know and appreciate that the vast majority of Americans recognize and respect the important work we do.” I beg to differ. Americans are just afraid to speak up for their Fourth Amendment rights stated by the U.S. Constitution for fear YOU, will single them out as a terrorist and further more serious actions will be taken. All in the name of aviation security.

Pistole, much like Big Sis can their their rhetoric and go fuck themselves! I refuse to take their invasive and unacceptable advances at a checkpoint THEY consider to be done in the name of security. This is not security this is ILLEGAL! You know it. The TSA know it. Pistole and Big Sis know it. Yet being part of TPTB you are willing to take away our freedom and rights.

While conditions were terrible…still. I did manage to work some contacts on 2M, 10M, 15M and 20M yesterday. I really had no intentions to put forth much of an effort. As I have written in the past, Field Day does not really get me excited like it does other operators. I love what the event stands for, but really no desire to participate.

I did leave work yesterday around 21z and since I did not have the ATAS-120A installed on the truck decided to use the 2m/440cm antenna and see if I could make any 2M SSB contacts. As luck would have it, I was successful! ON my drive from Oakland to Oakley I made three contacts, WW6OR, WA6TOW and K6XN. I did hear K6LRG and N9JIM as well, but did have a QSO with either of them.

When I got into the shack, I hooked up the extension cord to the Honda generator and fired it up and went to 20M. Strangely enough, I did not even bother with SSB, moving to the CW portion of the band. Not surprising the band was FULL of signals at varying WPM rates. I decided on about 25 WPM and started working stations in all categories. For the most part many signals were good, I did have a few that were tough to copy and required a repeat.

After getting through the CW portion of the band I punched in 14.150 and changes to SSB. Wow! Conditions were bad to begin with, it was noisy and many signals were just above the noise level. Signals on top of signals or so it seemed. I did not last long in SSB. I decided to check 10M and 15M, but only made a single contact on each. I decided to forget about working SSB stations and went back to CW for about another 30 minutes.