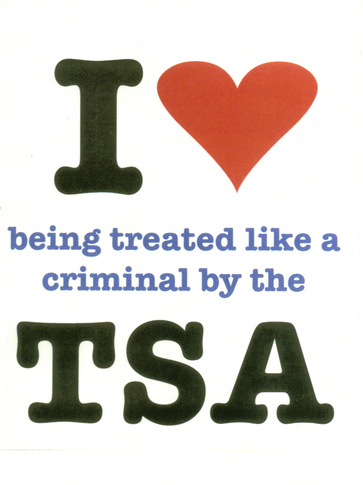 I am going to assume there is a certain percentage of Americans who are alright with the criminal activities of the TSA at the nation’s airports. The increased security procedures in the last few years continue to push the limits as to being Constitutional. In the eyes of some either security pat-downs are nothing short of groping and molestation. For me, it has gotten to a point that I won’t fly because of these activities being implemented by the U.S. Government.

Out of the great state of Texas comes this articles, Texas House Bans Offensive Security Pat-Downs. The bill’s (HB 1937) sponsor is David Simpson who said, “this has to do with dignity and travel, and prohibiting indecent, groping searches.” This would make it illegal for searches to touch, “the anus, sexual organ, buttocks, or breast of another person” including through clothing.”

Not sure the state will be able to prosecute TSA agents for allegedly “doing their job’ when it comes to the groping and molestation they practice on a daily basis. I will be more curious to see the response from the Federal government. I am sure there will be backlash shortly and the DHS/TSA will come back with their standard response, “Our officers followed proper current screening procedures….blah blah blah.” More of the same from the talking heads, Janet “Big Sis” Napalitano and Eric Holder.