Since becoming involved in amateur radio I have been a member of Mt. Diablo Amateur Radio Club (MDARC), which I let my membership lapse a few years back due to the goals of this club. More recently I joined the Northern California Contest Club, which has been invaluable to my development and experience as an amateur radio operator.

Going online, which is almost impossible not do due these days, club and organizations are a plentiful. Not matter where your interests lay, you can most likely find a group of like minded individuals. Two clubs I joined a few years ago were the Feld Hell Club (FH1842) and the Straight Key Century Club or SKCC (#4581). KX5JT, John and I were playing around with FH one evening and decided to join. To be honest I don’t think I have more than about 5 QSOs using FH, nonetheless it’s an interesting mode to operate.

I joined SKCC when I was learning Morse code and looking for other new CW operators to QSO with at a slow speed. I believe I had one contact and really no further affiliation with the group. I am not saying both groups don’t hold value in the amateur radio community because they do. My goals seem to be very directed at this time to contesting and improving myself as a contest operator. On the CW side, rarely do I use an actual key during a contest in an exchange. For the purists, macros are not CW, but when a high rate is a necessity macros are the only way to go.

This part Tuesday I read an e-mail on the NCCC Reflector about the CWops Mini-CWT Test, posts like this and that of the NCCC Sprint I usually ignore since my skills are not that of many of the experienced CW operators in the NCCC. Of course the only way to get better is to participate and while I have not been involved in a CW sprint to date, I did participate in the Mini-CWT yesterday.

It was a series of three, 1-hour events through out the day and I just happened to take break from working around the house at 1900z (1200 PDT). I went to the shack and heard these stations calling CQ CWT, I then remembered the NCCC Reflector e-mail and this event. So I participated for about 19 minutes on 20M answering CQ calls making just 9 contacts in that time. The nice thing, CWops rules allow everyone to work everyone, I just used ‘STEVE CA’ in my exchange, while a member of CWops sent their ‘NAME + MEMBER #’.

I also scanned the member roster and was not too surprised to see quite a few experienced CW operators who are also NCCC members. I know for a fact my fist is not up ti 25 WPM to even meet their minimum requirements, but I am interested in working towards that goal to join this group. Looks like fun, thankfully I can enjoy their activities even without being a member. 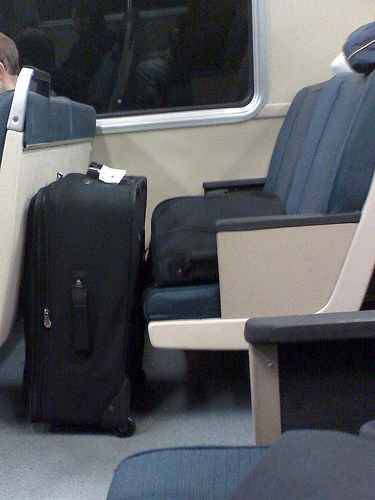 From the “dude, what are you thinking?” file comes this piece. I normally ride the train three days a week to help offset the every increasing price of gas. It takes a bit longer, but it’s worth the extra 10-15 minutes I spend driving home from the station. Today at Concord a patron boarded up the lead unit with two pieces of luggage. Now, for the regular ridership, this is usually a problem since the luggage will usually end up occupying a seat.

Today was something I had not seen previous, but not unexpected. He set his luggage in the ADA seats (the handicap seat, directly in front of me), which are for elderly and disabled patrons. I figured he was going to move the luggage around after he got situated. No, he walks across the aisle and sits across from me. I was somewhat surprised by his actions. Not only is this inconsiderate, but rude.

He got lucky this morning, as the lead car was not full and not all the seats were occupied. It would have been interesting to see if he would have actually moved his luggage if the car became standing room only, as I have seen it happen in the past. I am quite sure the operator could see luggage occupying the ADA seat. Maybe because of the load he did not say anything over the PA. It would have been more of an issue if he did not move his luggage if those were the last two seats in the car.

It was evident he was not a “regular” on BART. I do believe he did this intentionally and probably would not have moved his bags if a patron wanted to sit there. I guess many patrons really don’t care, that is the bottom line. They figure, they paid their money and can do whatever they want and store their bags wherever they want. Unfortunately that cannot be further from the truth.