I was able to get together with Chris, N6WM at his place today. After seeing his shack, much like mine relegated to the garage, he showed me the mast. It is Rohn and extends to about 20′, which is high enough for the hex beam. The only problems I have are first, mounting the past to my 4×4 post. Currently I have my tilt base rigged up and bolted to the 4×4. I slid the mast over this and then guyed the mast.

Unfortunately, there are more issues up at the top of the mast. How do I attach a 1 3/8″OD center post (on the hex beam) to a 1 1/4″ OD mast? Again, I rigged something up, just for SS CW this weekend because I am running out of time. The setup is secure, but I need to do a better job. Currently the mast is only about 15′ high. Just a few feet higher than it previously was. I have posed this question to the Hex Beam Yahoo Group and hopefully someone has an idea on how to accomplish this.

Regardless the mast is mounted and I should have a good time in SS CW this weekend. With any luck I can add a few more 33′ radials for the SteppIR BigIR tomorrow, just for 40m.

Spent some time over at Radio Oakley yesterday as N6RO, N6ML, K6AW and N6WM had planned to do some work on the 20M beam. The rotator was shot and it needed to be replaced, which had Iain (N6ML) and Steve (K6AW) at about 45′ in order to remove the rotator and install an angle iron so the beam would not swing from approximately 70 degrees for the upcoming SS CW. 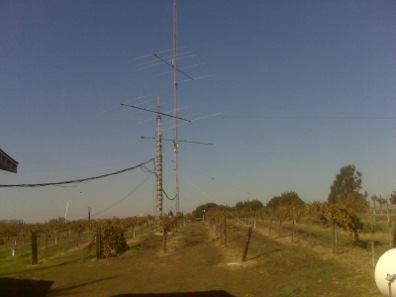 I am still new to contesting and working on antennas, towers, etc, so I acted as ground support and also tried to gain more experience from just being around these guys. It was good to talk to these guys, as I had not see them since I made my way to my first NCCC meeting some months ago. 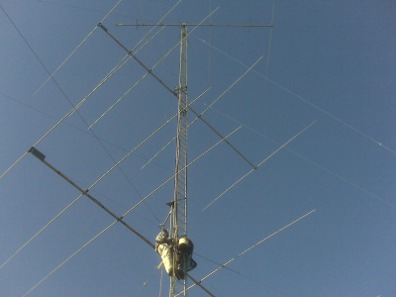 I asked Chris, N6WM if he knew a local place to find a push up mast, similar to a Rohn H50. He made mention he had one he would give me. I think my eyes lit up. So later today I will be calling Chris and going to his QTH in order to pick up this mast. Right now, I replaced the hex beam up on the shed in anticipation for SS.

With any luck this mast will get me the height I need when I want to extend the mast to approximately 20-25′. Hopefully it will also help to suppress the RFI issues I have recently been having in the entire shack. More information on it later today…