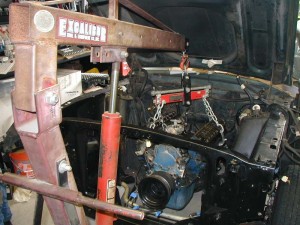 With the weather warming up and more cruises planned for our car club, the desire builds until you get to the point where you just cannot take it any longer and need to work on your car. Going off the thrill of the Spring Cougar Run sponsored by the Stray Cats, I did find time the past two days to spend about 12 hours total working on the ’68 Cougar. This was enough time to allow me to pull the 302 out of the engine compartment. Of course this was not what I had planned on doing, but one thing led to anything and before I knew it…well, read on. 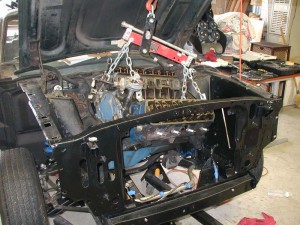 I spoke in jest of pulling the engine last year I believe, but that turned into reality yesterday when the engine was unbolted from the mounts and was raised out of the compartment. Oddly enough this all started because I needed to replace a leaking [I believe] water pump. This was the part I, with the input from the members of MC.net pinpointed.

Actually I had done quite a bit of work up to the point yesterday prior to removal in order to clean the engine compartment, such as removing as things like the alternator and solenoid and tubing from the engine walls. Before that, I had pulled out the air conditioning [which won’t be going back into the car], radiator, fan and shroud, pulleys, water pump, manifold/carb and valve covers. Much of this was R&R [remove & replace], such as the manifold and the carburetor, water pump, thermostat and the radiator. 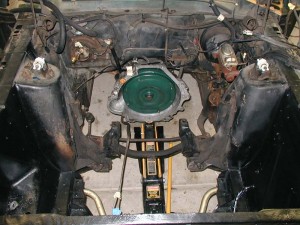 So after removing all these parts and staring at a timing chain cover, I began to ask myself, “what if?” What if I just pulled the engine? I mean hell, I have most of the parts off, just need to disconnect the transmission and a few other bolts. I inquired about this to my buddy, Greg [the Olds guy] and the group at MC.net. One of the first comments I got, after asking was it is an easier process with two people. Well, Monday was a very productive day, I basically removed the remaining bolts/nuts, but was not able to loosen the engine from the bell housing and slide the converter backwards. Come to find out that would be a very minor issue. Thankfully, the “beer tool” was not needed, although joked about on the forums.Tuesday, I enlisted the assistance of Mark, a fellow Cougar nut and member of the Stray Cats who came over and helped me finish off the choir of unbolting the engine and hoisting it out of the compartment. The process went fairly smooth and no major problem were encountered. We pulled of the headers, which made allowed for a but more lateral movement, hooked up the hoist and pulled the motor mount bolts and the engine was free. 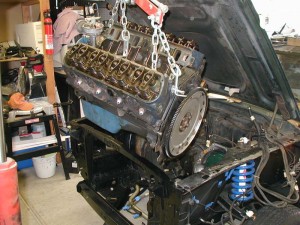 So now, the engine it sitting on a stand as I have been in communication with Arron, who owns Bad Ass Engines in Sonoma. While I was considering buying a new engine, it was decided to rebuild the current 302 off my block, reusing some of the parts in addition to the new parts I had previously purchased such as an Edelbrock Performer manifold intake and a Holley 600 carburetor. I also scored a good deal on a set of Cougar valve covers locally. Those are the major parts I already have that will go back on the engine.Turnaround time for the engine should be approximately 15-20 days, which should give me enough time to clean, sand and paint the engine compartment. While the engine is out, I would like to change out the steering box, which continues to have play when turning the wheel. I will also be removing the power brake booster and master cylinder along with the proportional valve and cleaning those parts as well.My target date to complete the engine is July 16, because that is the day of the SC/NCCC “Classic Cougar” Picnic at Ed Levin Park in Milpitas. While the car will still look like a “beater ” [as my wife puts it], it will steer, break, sound and run great since most of the mechanical work will have been completed.